Conjoint twins are a rare type of monoamniotic twins, with an estimated incidence of 1.5 per 100,000 births worldwide. Fusion occurs between same body parts due to a defect in embryological development. Cardiovascular and other congenital anomalies lead to dismal prognosis with conjoined twins. Early prenatal diagnosis can help in parental counseling regarding the management of pregnancy, including termination or post-natal surgical separation. Ultrasonography and other imaging techniques are vital in making the anatomical survey for evaluating future options. We report a rare variant of conjoined twins, Dicephalus Dipus Dibrachius, where the fetus has two heads, but a single trunk, with two upper and two lower limbs, diagnosed at 9 weeks and 4 days of gestation, with the help of ultrasonography and color Doppler imaging.

Conjoined twins are those twins that are physically joined at birth, sometimes sharing organs. The prevalence of conjoined twins globally is 1 in 50,000 to 1 in 100,000 births [1, 3]. The incidence of dicephalus dipus dibrachius twins is much less than those of conjoined twins and has not been documented so far. Conjoined twins occur due to incomplete division of the embryonic disc at or after 13 days post-conception [1, 2]. Dicephalus dipus dibrachius is a condition where the fetus appears to have two heads with distinctly separate blood supplies, two upper limbs and two lower limbs. They have a single trunk and share a common heart. Early detection of such pregnancies can help recognize the extent of congenital anomalies and prevent maternal complications associated with late termination of pregnancy. In our case, the fetus was diagnosed at 9 weeks of gestation by ultrasonography and color Doppler scanning.

A 25-year-old woman presented to the office with 2.5 months of amenorrhea. Urine Pregnancy Test confirmed pregnancy. She had a history of one live birth, and this was her second pregnancy. Her first child was born three years ago via Lower Segment Caesarian Section (LSCS). She denied any contraception usage or infertility treatment after her first child. She had no significant past medical history. There was no family history of twins, diabetes mellitus or hypertension. On examination, the patient was not anemic or hypertensive. Her cardiovascular and respiratory examinations were normal. Her routine antenatal investigations were normal, and her blood group was determined as O negative.

Ultrasonography showed a single fetus with a gestational age of 9 weeks and 4 days. The fetus had two heads with a single broad chest, two upper limbs and two lower limbs. Color Doppler imaging showed a single heart, with a heart rate of 162 beats per minute (Figure 1 and 2). A separate blood supply to each head was noted. This led to a diagnosis of Dicephalus Dipus Dibrachius-Conjoined Twins. The patient was counseled about the maternal and fetal complications of the pregnancy and the possible fetal outcomes. On patient’s request, the pregnancy was terminated medically using three doses of vaginal Misoprostol 400 mg, followed by dilatation and curettage. The post-abortive period was uneventful. 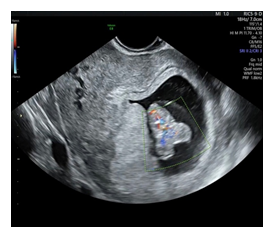 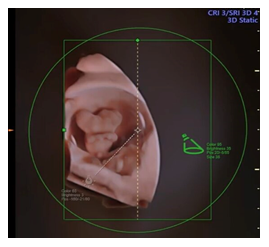 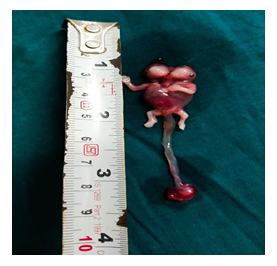 Conjoined twins are considered monozygous, arising from the same zygote. Majority of them are monochorionic and monoamniotic [3]. Hence the twins share the same gender, with female predominance of 2:1 [4]. The incidence of dicephalus twins worldwide is 11% of conjoined twins, and they are considered the rarest form of symmetrical conjoined twins [5,13]. Two theories have been proposed to explain the development of conjoined twins. The first describes incomplete fission of a single embryonic disc, which occurs at 13 days post-fertilization of the egg. In dicephalus twins this division takes place only in the cephalic region of conceptus. The second theory proposes a complete division of the fertilized ovum, leading to two embryonic discs. However, the two discs are juxtaposed, which results in unusual secondary fusion [5,15].

The conjoined twin in our case is of the Parapagus dicephalus dibrachius dipus type. Parapagus meaning fused laterally or side to side. This can further be divided into: Parapagus dicephalus-presents as a single trunk due to lateral fusion, single abdomen and single pelvis; and Parapagus diprosopus-presents with two faces on a single head, a single trunk, single abdomen and pelvis. The degree of separation between the twins increases as the spectrum of parapagus twins progresses from diprosopus to dicephalus, because the distance between the rostral ends of embryonic disc increases. First trimester ultrasound findings suggestive of conjoined twins, include bifid appearance of the first trimester fetal pole with a “Y” or “V” shaped embryo, continuous skin contour at same amniotic level, single placenta, single amniotic cavity, complex fetal anomalies, abnormal number of vessels in the spinal cord, fixed position of fetal poles in relation to each other [9-12]. Color Doppler, three-dimensional ultrasound and fetal echocardiography can help confirming the diagnosis and making an anatomical survey. Fetal MRI and three-dimensional printing may also be beneficial. Imaging is crucial to determine the prognosis and for surgical evaluation [21-25].

Past studies of dicephalus twins describe fused hearts with complex anatomy, including right aortic arch and reversal or transposition of great vessels [17,18]. When two hearts are present, the right twin’s heart is usually more severely malformed [16]. Defects of laterality, with absent spleen or situs inversus of the right twin’s abdominal organs, often accompany heart abnormalities [17]. If the hearts are not fused, abdominal viscera are situated normally [17]. There are generally two sets of lungs, which may be underdeveloped or anomalous, especially in the right twin [16-18]. The liver, pancreas, gallbladder, genitourinary tracts, and rectum may be shared [16,17].

Conjoined twins are associated with polyhydramnios and preterm birth [26,27]. Since the twins do not move independently, cord entanglement is not a big concern. Successful vaginal delivery of undiagnosed conjoined twins has been reported, but it poses a high risk of dystocia and maternal/fetal trauma. Uterine rupture has been documented [28-30]. Second trimester vaginal delivery may be done, as the twin mass is much smaller, when compared to term. It can be used for non-viable twins or for pregnancy termination, like in our case.

Roughly 40% of conjoined twins are stillborn and 35% die in the first 24 hours of life [19,20]. Moreover, only 60% of surgically treated conjoined twins survive, in which the dicephalus twins survival ranges from stillbirth to few hours [8]. This could be due to the cardiorespiratory malformations. Approximately 25 percent of twin pregnancies were not diagnosed until after 21 weeks of gestation. Hence it is very important to diagnose the cases as early as possible either for termination of pregnancy or to plan separation depending on the extent of fusion between the twins. The condition gets more complicated as the level of attachment and the sharing of vital organs such as the heart increases.

The mode and timing of delivery must be carefully planned if separation of twins is being considered. The surgical separation of conjoined twins is possible only in selected cases involving a multidisciplinary approach using several specialties. Most successful separation was seen in cases of omphalopagus twins [3]. Even when separation is possible, a thorough analysis by a multidisciplinary medical team is required to determine the viability and feasibility. Although there are few reports of unseparated dicephalic twins reaching maturity, one pair (the Tocci brothers) reached at least 34 years of age. In the absence of concomitant cardiac, pulmonary, and intestinal malformations, dicephalus conjoined twins may well attain adulthood [14].

Conjoined twins have dismal prognosis. Early diagnosis in the first trimester is preferable, to allow for parental counseling and medical management (including termination), since it cannot be resolved easily at term. Failure to identify such cases early due to lack of adequate antenatal care, may lead to adverse fetomaternal outcomes. Ultrasonography, with or without MRI, is necessary for perinatal and postoperative management of the patient. A vigilant obstetrician can help in the timely identification of conjoined twins and guide the mother to a safe outcome.

We are thankful to Dr. Tati Indira Gouri for her continuous and unwavering support.

The authors declared no conflicts of interest.