Ovarian hemangiomas are very rare benign tumors of the female genital tract. Most cases are small lesions that are discovered by chance. Although they are often an incidental finding at surgery, these lesions may sporadically be associated with systemic manifestations. Here, we describe a 63 year-old woman with a right ovary benign hemangioma who presented with a clinically suspicious left ovarian torsion.

Ovarian hemangiomas are very rare benign tumors of the female genital tract, usually found incidentally and with an unknown and controversial etiology [1]. Hemangiomas can be of different types: i) the cavernous type is composed of a non-lobular, proliferation of numerous dilated vessels with flattened endothelium; ii) the capillary type usually lobulated made up of numerous small capillaries often radiating from larger, more central vessels set; iii) the anatomizing type consists of a non-lobular vascular proliferation of capillary sized vessels which are usually intermixed with a larger vessel [2]. Hemangiomas, cavernous type, capillary type and anastomosing type, are found only occasionally in the ovary, with less than 100 cases reported in the literature [3, 4]. The origin of ovarian hemangiomas, as well as hemangioma in general, is a matter of debate and it is considered either a hamartomatous malformation or a true neoplasm. Most cases are small lesions but some lesions could be large with abdominal enlargement due of the presence of an ovarian mass [1]. However, most ovarian hemangiomas are of the cavernous type and consist of multiple, dilated, blood-filled vascular channels lined by a single layer of endothelium. Occasionally, OHs are associated with hemangioma of the genital tract or other sites. Here, we report a case of ovarian cavernous hemangioma found accidentally for clinical suspicion of contralateral ovarian torsion. 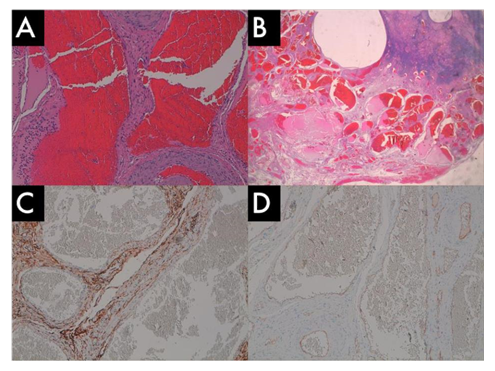 Ovarian hemangioma is a benign and very rare neo-formation often small and asymptomatic usually unilateral lesion, although bilateral ovarian hemangioma have been reported [5, 6]. When this kind of neo-formation is larger, it could appear with abdominal pain derived from the torsion of the ovary. The main risk factor for ovarian torsion is not the ovarian hemangioma itself but the dimension of the ovarian mass (diameter of > 5 cm). In fact, a large ovarian mass increases the possibility that the ovary could rotate on the axis reducing venous outflow and arterial inflow [7]. Some authors described an association between ovarian hemangioma, massive ascites and elevated CA-125 marker [8] or non-ovarian tumors (cervical carcinoma, endometrial or tubal carcinoma) [9]. Ovarian hemangioma have been considered hematoma-like malformations or neoplasm by itself, generally located in the medulla and hilar regions with a controversial etiology [1, 10]. Pregnancy, hormonal stimulation and infections have been considered potential important factors for its growth [11]. In the case reported, the patient presented to the hospital with acute abdominal pain and the hemangioma was discovered incidentally during histopathological examination. Similar to other cases in literature, abdominal pain was due to ovarian torsion. The precise site of the hemangioma could not be localized because the large tumor (about 8 cm) and consequent ovarian torsion leaded to ovarian architecture destruction. Contralateral ovary appeared normal and this was confirmed by microscopical examination. We did not find ascites, and serum tumor markers were normal.

In conclusion, ovarian hemangioma may manifest itself as an ovarian mass with a sudden increase. Clinicians should consider this rare event in their diagnostic work-up.

The authors have no personal, financial, or institutional interest concerning the authorship and/or publication of this manuscript.