Systemic amyloid A (AA) amyloidosis secondary to rheumatoid arthritis (RA) is a serious complication, often leading to end-stage renal disease (ESRD) or death. Intervention with biologic agent, which has brought a paradigm shift in the treatment of RA, may improve the prognosis of AA amyloidosis. Among RA patients in ANSWER Cohort in Japan, 11 patients with biopsy-proven AA amyloidosis were identified and retrospectively investigated. Median age at the diagnosis of AA amyloidosis was 64 years and median disease duration of RA was 16 years. ESRD occurred in 5 patients, and 3 of them died. Seven patients received the treatment with biologic agents. Poor prognosis such as ESRD or death was associated with advanced renal dysfunction, insufficient anti-inflammatory treatment and longer disease duration of RA, whereas good prognosis was associated with no renal involvement or mild renal dysfunction, and the use of biologic agents. This observation, along with presentations of all identified cases, suggests the importance of disease control during mild kidney damage using potent anti-inflammatory drug such as biologic agent to improve prognosis..

Systemic amyloid A (AA) amyloidosis is a serious complication of rheumatoid arthritis (RA). Deposition of AA fibrils in kidney, intestine, heart and/or other organs leads to dysfunction of the organs and indicates poor prognosis. It has been reported that median survival time after diagnosis of AA amyloidosis was 133 months and factors associated with end-stage renal disease (ESRD) or death were high concentration of serum amyloid A protein (SAA), older age, long duration of inflammatory diseases and the existence of renal dysfunction [1]. Emergence of biologic agent such as tumor necrosis factor a (TNF) inhibitor, anti-Interleukin-6 (IL6) receptor agent and cytotoxic T lymphocyte associated protein 4 (CTLA4)-Fc fusion agent, or Janus kinase inhibitor has brought a paradigm shift in the treatment strategy of RA [2]. These drugs suppress joints’ inflammation and their destruction and reduce systemic inflammation of the patient. It is not clearly understood whether administration of these treatments could improve long-term prognosis for several years in RA patients with AA amyloidosis. Here we describe the clinical courses of 11 cases among a multicenter cohort with or without treatment of biologic agent.

Patients who were diagnosed as AA amyloidosis by histological examination were identified during the maximum observation period of 12 years among the cohort population. Pathologist in each institution diagnosed as AA amyloidosis by standard procedures, e.g. Congo Red Staining. We retrospectively collected their clinical information such as characteristics of the patients, organs affected by AA amyloidosis, laboratory data, treatments and prognosis. The most important outcome to consider in this study was the incidence of ESRD or death. The occurrence of ESRD was defined as the administration of dialysis due to advanced renal failure.

Eleven patients with biopsy-proven AA amyloidosis were identified. Among these patients, 3 patients were diagnosed by renal biopsy, 5 patients were by upper gastrointestinal endoscopy and 3 patients were by lower gastrointestinal endoscopy. Characteristics of the patients are presented in Table 1. Ten patients were female, and one patient was male. Median age at the diagnosis of AA amyloidosis was 64 years with median duration of 16 years from the onset of RA (range 1 - 28 years). Organ involvements were seen in intestine (8/11), heart (2/11) and kidney (7/11). Treatments and the prognosis are summarized in Table 2. Drugs such as methotrexate (5/11), tacrolimus (2/11), glucocorticoid (7/11), salazosulfapyridine (1/11) and any biologic agent (7/11) were used to treat the patients. Five patients led to ESRD (case 5, 6, 7, 8 and 11), and 3 patients died (case 6, 8 and 11). All 4 patients without renal involvement survive, whereas patients with renal involvement had poor life prognosis (Figure 1A, p = 0.13, unadjusted). Patients with the use of biologic agent had better life prognosis than those without the use of biologic agent (Figure 1B, p = 0.0085, unadjusted). These results were mostly the same in ESRD-free survival rate (Figure 1C and 1D, p = 0.067 and p = 0.072, unadjusted). As shown in Figure 1E, poor prognosis such as ESRD or death was associated with the elevated levels of serum creatinine (p = 0.010, unadjusted). Disease durations of RA in patients with poor prognosis were tended to be longer than those in patients with good prognosis (median 21 years versus 13 years, p = 0.31, unadjusted).

Table 1: Patients’ characteristics at the diagnosis of AA amyloidosis. 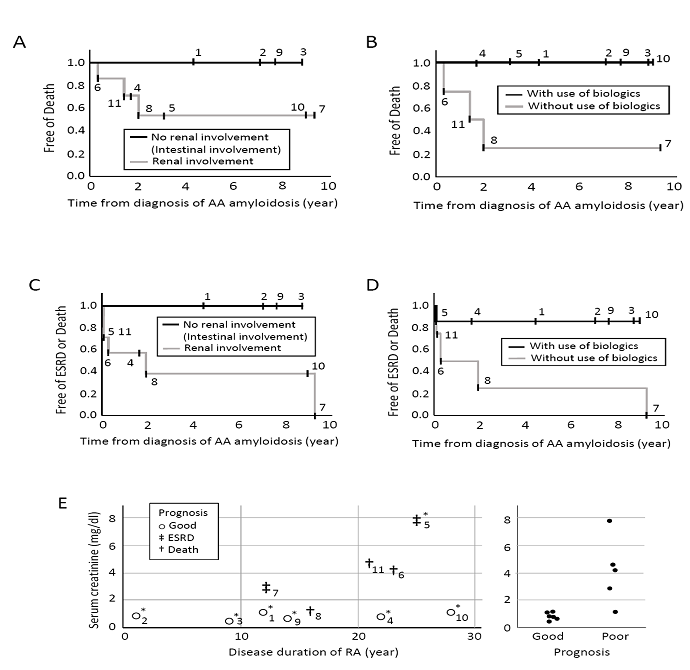 Case 2 was a 62-year-old woman diagnosed as AA amyloidosis by upper gastrointestinal endoscopy. She was diagnosed as RA at the previous year. Her manifestations were diarrhea, edema, hypoalbuminemia (1.7 g/dl) and elevated CRP (89 mg/L). Infliximab combined with methotrexate was administered, however joint inflammation and gastrointestinal manifestation persisted. Tocilizumab was started. Gradually, her condition improved. She maintained low disease activity of RA and showed no gastrointestinal symptom.

Case 3 was a 64-year-old woman diagnosed as AA amyloidosis by upper gastrointestinal endoscopy. Her symptoms were arthralgia and edema. Laboratory examination revealed elevated CRP (37 mg/L), anemia (hemoglobin, 10.2 g/dl), hypoalbuminemia (2.1 g/dl) and elevated brain natriuretic peptide (BNP, 767 pg/ml). No clinical signs of heart failure except BNP elevation were observed. Infliximab combined with methotrexate was administered, however inflammation of joints persisted. The biological agents were serially changed to adalimumab, tocilizumab, abatacept, etanercept, golimumab and finally certolizumab pegol. The reason of changing these agents was insufficient responses to joint inflammation. Then, she continued to receive certolizumab pegol. The level of serum CRP and albumin normalized. Serum BNP level also improved to 126 pg/ml. No finding of heart failure was observed during the entire period.

Case 5 was a 59-year-old woman suffering edema, diarrhea and appetite loss. She was diagnosed as AA amyloidosis by upper gastrointestinal endoscopy. Blood examination showed advanced renal dysfunction (serum creatinine 7.8 mg/dl) and elevated CRP (67 mg/L) and BNP (678 pg/ml). She needed hemodialysis. Advanced renal failure, heart failure and gastrointestinal insufficiency were considered due to AA amyloidosis. She was treated with adalimumab. Three years later, she continued to receive hemodialysis. The level of CRP declined to 16 mg/L, and the level of serum creatinine remained high (5.9 mg/dl). Symptoms such as edema and pleural effusion persisted due to heart failure. She was transferred to a different hospital and the course after that was not traced.

Case 6 was a 64-year-old man suffering edema, pleural effusion, severe diarrhea and appetite loss. The level of serum creatinine was 4.1 mg/dl, and the urinary protein excretion was massive (4+, 2.4 g/gcreatinine). Serum level of BNP was highly elevated (1180 pg/ml). Renal failure, heart failure and gastrointestinal insufficiency were considered due to AA amyloidosis. He was treated with moderate dose of glucocorticoid (prednisolone 20 mg/day), however serum creatinine level continued to increase and the heart failure did not improve. His general condition worsened, and three months after the diagnosis of AA amyloidosis, he died.

Case 8 was a 68-year-old woman diagnosed as AA amyloidosis by renal biopsy. She received methotrexate and entecavir due to positivity of hepatitis B virus (HBV). The level of serum creatinine was 1.2 mg/dl. Treatment of tocilizumab was considered, however she did not accept the administration, because she was concerned about HBV reactivation and hepatitis. Serum CRP level remained high (around 20 mg/L). After 2 year, the level of serum creatinine reached to 7.2 mg/dl, and hemodialysis was administered. Three month later, she died unexpectedly at the other hospital. The detailed cause of death was unknown.

Case 11 was a 64-year-old woman diagnosed as AA amyloidosis by renal biopsy. The level of serum creatinine was 3.3 mg/dl. She was treated with salazosulfapyridine. Serum CRP remained positive. One year later, serum level of creatinine reached to 4.7 mg/dl, and she needed to receive hemodialysis. Laboratory test showed elevated CRP (46 mg/L) and urinary protein excretion (2+, 3.3 g/gcreatinine). Treatment with salazosulfapyridine was continued. Two years later, she was admitted to another hospital and died due to heart failure.

In this cohort, 11 patients were identified as AA amyloidosis secondary to RA. All the patients were diagnosed by histological examination of gastrointestinal tract or kidney. Poor prognosis such as ESRD or death was associated with the existence of renal involvement, especially the elevation of serum creatinine at the diagnosis of AA amyloidosis. On the other hand, good prognosis was associated with the administration of biologic agent, and no renal involvement or mild renal dysfunction. Disease duration of RA was tended to be longer in patient with poor prognosis.

In the case 4 and 10, although they had renal dysfunction and their disease durations of RA were relatively long (22 and 28 years), their prognosis were not poor. Serum creatinine levels of these patients at the time of diagnosis of AA amyloidosis were 0.92 mg/dl and 1.2 mg/dl, and these two patients received treatments with biologic agent such as etanercept, abatacept or tocilizumab. Introduction of biologic agent might suppress the progression of kidney disease or even ameliorate the renal involvement of AA amyloidosis because of the earlier phase of kidney disease. All 4 patients without renal involvement, who had only intestinal involvement (case 1, 2, 3 and 9), had good clinical courses with the use of biologic agent. Three patients showed the elevated serum BNP (case 3, 5 and 6). Among them, 2 patients (case 5 and 6) had advanced renal dysfunction, and their heart failure did not improve. In the case 3, who did not manifest heart failure clinically and her disease duration of RA was relatively short, serum BNP level declined and normalized with the treatment.

Irreversibility of organ damage may be strong in kidney and lesser in intestine. One case report suggested that therapeutic effects of tocilizumab might vary among organs and administration of tocilizumab ameliorated intestinal and heart findings however did not ameliorate renal insufficiency [6]. In our current study, differences of the efficacy among various biologic agents or by mode of action could not be assessed due to the small number of patients and the variation of patients’ background. There are some reports that administration of tocilizumab, anti-IL6R agent, promptly ameliorated organ damage induced by AA deposition [7-9]. There are also some reports that TNF inhibitor such as infliximab and etanercept ameliorated findings of AA amyloidosis [10-12]. One non-randomized controlled study suggested that tocilizumab may be superior to TNF inhibitor to suppress SAA production and ameliorate organ damage by AA deposition [13]. Abatacept, CTLA4-Fc agent, was reported to be effective in two RA patients with AA amyloidosis [14]. In the case 4, administration of abatacept switched from tocilizumab ameliorated the manifestations of RA and AA amyloidosis. Rituximab, anti-CD20 agent, was also reported to be effective in some patients [15].

This case series study is retrospective, observational and descriptive research. Patients’ background such as age, disease duration, affected organs, comorbidities and concomitant drugs differed widely between the patients. The number of the patients was too small to prove the clinical hypothesis statistically and to compensate confounders by multivariable analysis. Decisive conclusions need further verification by controlled study or observational study with more patients and longer period. However, we consider that the results of this study would contain important viewpoints for the management of AA amyloidosis secondary to RA or other inflammatory diseases.

In conclusion, our report suggests that poor prognosis of AA amyloidosis secondary to RA was associated with advanced renal dysfunction, insufficient anti-inflammatory treatment and longer duration of RA. By therapeutic intervention within the early stage of renal dysfunction, and by the use of potent anti-inflammatory drugs such as biologic agent, poor prognosis such as ESRD or death will be avoided.

We thank to Kengo Akashi, Akira Onishi, Masaaki Katayama, Keiichi Yamamoto, Shuzo Yoshida and Wataru Yamamoto for discussion on research protocol and interpretation of the results.