Endometriosis is a serious disease affecting women, presenting three main variations. Its diagnosis and treatment are more than challenging. This is a rare case of deep infiltrating bowel endometriosis which contradicts current pathogenetic notions, based on its infiltration pattern. Pathogenesis of deeply infiltrating bowel endometriosis is ill-defined, entailing inoculation of endometrial tissue on the bowel wall mainly due to retrograde menstruation or coelomic metaplasia. This is an rare case of a patient who presented a single endometriotic bowel lesion, progressing from the inwards of the sigmoid colon, infiltrating a single lymph node.

Endometriosis is a condition where endometrial-like epithelium ectopically infiltrates tissues outside the uterus, roughly affecting 10-15% of women of reproductive age [1-3]. It is a benign, chronic disease, with severity ranging from totally asymptomatic to a complete impairment of patients’ quality of life. Women may report dysmenorrhea, dyschezia, dyspareunia, infertility, rectal bleeding, constipation, crampy abdominal pain, lower back pain, depending on the disease’s location [3-9]. Rarely, endometriosis may present with intestinal obstruction, perforation or appendiceal rupture [3, 5, 7, 8]. Cyclical pattern of symptoms is not always present [5].

There is no definite pathogenetic mechanism, and several scenarios have been envisaged. The most cited theories refer to: (i) retrograde menstruation of endometrial tissue through the fallopian tubes into the peritoneal cavity, or (ii) coelomic metaplasia, where metaplastic cells aberrantly differentiate into endometrial tissue outside the uterus, along the visceral or abdominal peritoneum. The possibility that these mechanisms act on a genetic background and/or immune system defects has also been suggested, and is further supported by increased prevalence of the disease among family members [2, 10, 11]. That said, certain cases of endometriosis may also be iatrogenic, following surgical procedures that manipulate either orthotopic or ectopicendometrial tissue [12]. The fact that most endometriotic implants are found in the pelvis and the lower abdominal cavity may relate to anatomical barriers, such as the rectosigmoid colon, which prevents retrograde menses from flowing cephalad from the pelvis [13].

Overall, three types of endometriosis are recognized; superficial endometriosis, ovarian endometrioma and deeply infiltrating endometriosis (DIE) [8]. DIE, which prevalence varies in literature, collectively accounting for 1-5% of all endometrioses in women of reproductive age [14], is defined as the presence of endometriotic lesions >5mm beneath the peritoneum [11, 12]. DIE often affects the bowel, with the rectosigmoid colon being the most frequently affected site, possibly due to the anatomical reasons described above (>50% exclusively rectal disease, 36.3% both rectal and colonic disease) [3, 8, 12, 15].

As expected, intestinal serosa and muscularis layer are found to be infiltrated, indicating implantation of endometrial tissue from the “outside” of the bowel wall. Solid bowel endometriosis is rare, reported in 6.9% of the cases according to Roman’s survey [6, 15].

A 31-year-old female was admitted to the hospital, complaining for abdominal distention and changes of bowel movement frequency over the past 10 months, which she noticed to be deteriorating following menstruation. She reported two episodes of bloody stools, which she attributed to hemorrhoids. Her medical record was unremarkable, except for dysmenorrhea and beta-heterozygous-thalassemia. On clinical examination her abdomen was soft, non-tender and no abdominal masses were palpated. Bowel sounds were normal. Rectal examination was negative for blood presence. Complete blood count and biochemical tests, including CEA, AFP, CA-125, and CA15-3, were also normal.

Τtransvaginal sonography (TVS) revealed a movable mass next to the right ovary. An abdominal magnetic resonance imaging (MRI) exam followed, revealing a 3.5 cm × 2.5 cm × 2 cm slightly hyper-dense nodular sigmoid wall thickening with smooth margins, partially narrowing the sigmoid lumen. Based on the above, the possibility of a mesenchymal bowel tumor was raised. As a pre-operative workup, the patient underwent a multi-slice computed tomography (CT) four months later, which demonstrated a homogeneously enhancing 3.1cm × 2.5 cm × 3 cm mass protruding into the sigmoid lumen (Figure 1F). There were no findings indicative of pericolic stranding, locoregional lymphadenopathy and metastasis.

Examination of the uterus and ovaries was unremarkable. Adenoma was a possible diagnosis, and malignancy could not be ruled out. Colonoscopy was performed, reporting the presence of a 3 cm tumor at 30 cm from the anal verge, hard and solid in texture, with irregular and sporadically erythematous surface (Figure 1A). Histopathological examination of random biopsies endoscopically obtained were inconclusive, reporting fragments of polypoid bowel mucosa, with edema, without any dysplastic epithelial lesions, infiltrated by lymphocytes and plasmatocytes. On these grounds, the patient was subjected to laparoscopy for possible malignancy. The abdominal and pelvic cavity was thoroughly examined, with no remarkable findings. However, there was a tumor-like mass shriveling the sigmoid colon. Serosa was macroscopically intact and there were no signs of intrabdominal invasion (Figure 1B, C).

An oncologic resection was decided, entailing laparoscopic sigmoidectomy with total mesocolic excision, distal and proximal bowel margins of resection 10cm from the tumor and high vessel ligation. Patient’s post-operative course was uneventful and she was discharged on the fourth postoperative day. Specimen’s histopathological examination revealed colonic endometriosis, infiltrating all bowel layers and pericolic fat tissues, with local mucosal erosion. Moreover, endometriosis was reported in one out of sixteen specimen’s lymph nodes. Intriguingly, and in accordance to what was macroscopically observed during laparoscopy, infiltration displayed an inwards to outwards pattern, with the mucosa being the most and the serosa being the least infiltrated layer. At 1-year follow-up, she remains free of clinical symptoms of the disease. 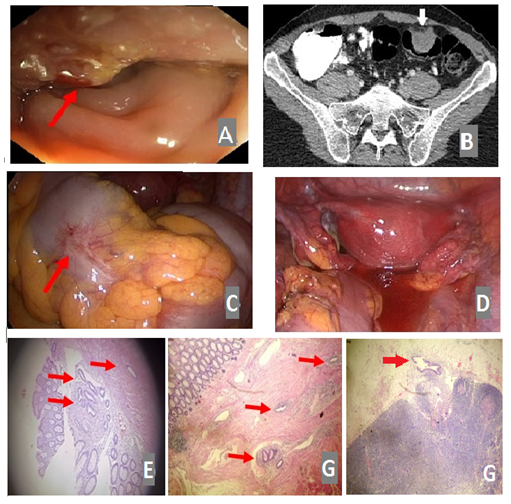 The fact that there are many notions regarding endometriosis’ pathogenesis implies that there is no definite explanation. The perioperative and the histological findings, came as a surprise, as they contrast what is known for intestinal DIE. More particularly, this case presented a single lesion of the sigmoid, with no other lesions found in the ovaries, the peritoneum, the uterosacral ligament or the rectovaginal septum. The sigmoid serosa was macroscopically intact perioperatively, in contrast to the mucosa which endoscopically appeared fully infiltrated. The findings were further corroborated by the histological examination, which demonstrated infiltration progressing from the mucosa towards the serosa, while a single lymph node was positive for endometriosis. This pattern of dissemination cannot be explained by the current notions regarding the pathogenesis of bowel endometriosis, the most prominent being implantation of endometrial tissue on the external colonic wall as a result of either retrograde menstruation through the fallopian tubes or metaplasia of specialized cells within the mesothelial lining of the visceral and abdominal peritoneum. Moreover, lymphatic metastasis does not clearly apply in this case; It cannot be told whether the lymph node was primarily infiltrated giving metastasis to the sigmoid colon or its disease was result of primarily colonic disease. Moreover, of note, expert commentaries on bowel endometriosis explicitly state that “they have never seen purely isolated intestinal disease” in patients with advanced endometriosis [16].

The fact that makes this case rare is that even during laparoscopy, there were no other lesions detected macroscopically. Serosa was intact, colonoscopy was inconclusive and cancer risk could not be eliminated. Consequently, oncologic surgery should be performed and final diagnosis was determined with surgical specimen’s pathology report.

Regarding disease’s complexity and its major impact on women population, more studies are needed to establish a more solid notion on endometriosis pathogenesis and to incorporate a more accurate diagnostic algorithm. Successful treatment of endometriosis demands an experienced and skillful surgical team supported by a multidisciplinary approach, for patient’s best interest.

The authors have no relevant conflicts of interest to disclose.