4Faculty of medicine of Tunis, 1006, Tunisia

Brucellosis is a zoonotic infection caused by Gram-negative intracellular bacteria. It is an ongoing public health problem in many countries throughout the world, especially in the Mediterranean region. Involvement of the central nervous system, particularly the white matter, is relatively uncommon and the underlying mechanism is steel unclear. We describe here, the case of a young woman presenting Neurobrucellosis as a leucoencephalopathy, and discuss the physiopathogeny through immunological findings. An extensive investigation of her immune system showed no defect in NADPH oxidase complex and no functional disorder of IL12/IFN-γ pathway. Quantitative real-time PCR analysis, preceding and following antibiotic treatment, revealed the association of inflammation in the cerebro-spinal fluid with higher IL-6 and IL-17 expression. These results could improve our understanding of inflammation in a leptomeningial and WM involvement related to Neurobrucellosis for a better diagnosis when clinical, MRI data and hematological routine tests are non-specific.

Brucellosis in humans is a zoonotic infection caused by Gram-negative facultative intracellular bacteria of the brucella genus. It is an ongoing public health problem in many countries throughout the world, especially in Mediterranean region. Neurobrucellosis (NB) occurs in 5-10% of cases of brucellosis [1]. The most common neurologic manifestation is a sub-acute or chronic meningoencephalitis. Central nervous system (CNS) demyelination or involvement of the white matter (WM) is the rarest form of neurobrucellosis [2]. The reasons and the exact nature of WM involvement remain unknown. The pathophysiology of brucellosis was investigated for many years in experimental models. It was demonstrated that Brucella infects microglia and astrocytes eliciting the production of a variety of pro-inflammatory cytokines and secretion of metalloproteinases which contribute to CNS damage [3]. Here, we investigate the cytokine network that regulates Brucella infected cells in the context of CNS damage in NB. So, we report the case of a young woman suffering from NB revelled by neurological signs. An extensive investigation of her immune system before and after therapy will be discussed.

A 28-year old woman with no significant past medical history was admitted in January 2015 because of a 4 weeks progressive weakness and numbness of lower limbs. She did not suffer any recent infections, but reported a weight loss and anorexia during the six previous months. On admission, she was oriented and a febrile. A history of consumption of unpasteurized milk and fresh cheese was found. Neurological examination showed muscle strength in lower extremities at 3/5, absent deep tendon reflexes in both legs and hypoesthesia of bilateral L3 dermatomes. The cranial nerves (right VI, right VII and bilateral VIII) were involved. Neither meningismus nor pyramidal signs were noted. Brain MRI was performed on 3 Tesla. On T2 and Flair sequence, multiple extra-axial empyemas with thickening of adjacent meninges were observed. Post contrast T1 weighted images revealed unusual leptomeningial enhancement (Figure 1). 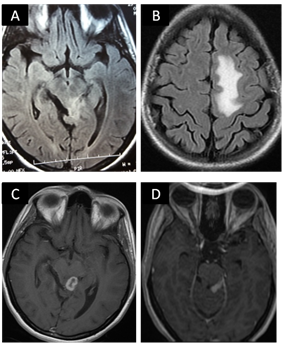 On laboratory analysis, leukocyte count was 7780 per mm3 (62.7% neutrophils). Erythrocyte sedimentation rate (ESR) was 70 mm after an hour; the C reactive protein was negative. VDRL, Hepatitis B, C, HIV serology and antinuclear antibody ANA were found to be negative. The tuberculin skin test was negative. Cerebrospinal fluid (CSF) analysis revealed an increased protein level (3.13 g/l), a decrease of glucose level (2.13 mmol/l) and hypercellularity (99 cells/µL, 100% lymphocytes). CSF culture did not yield any bacterial growth and was negative for M. Tuberculosis. Wright’s serum agglutination test was positive (blood titration was 1/80 and CSF titration was 1/40). Isoelectric focusing with IgG immunoblotting revealed a type 2 profile meaning intrathecal synthesis of immunoglobulin (OCB) with a value of 984 mg/l for IgG CSF(N<34) and a high level of albumin CSF at 2190 mg/l (N<350). IgG index was 1.26 (N<0.7). Based on clinical, radiological and laboratory findings, the patient was diagnosed as Neurobrucellosis. A combination treatment with three antimicrobials (Rifampicin-Doxycycline and cotrimoxazole) was started immediately.

At 3 months follow up visit, the patient felt better. Her neurological symptoms gradually improved. Control contrast enhanced cranial MRI showed a partial disappearance of meningial enhancement (Figure 2). ESR and serum biochemical values were within normal limits. In CSF control test, a decrease in total proteins was observed: 2.02 g/l. Two samplings for immunological analyses were performed, one of the first medical visit before treatment and the second 4 weeks after treatment. 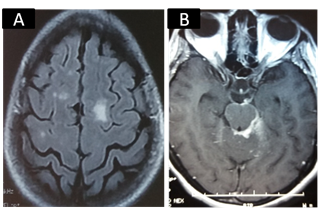 At the first sampling, Immunophenotyping of peripheral blood mononuclear cells (PBMCs) revealed normal CD3, CD4 and CD8 T cell count. The polymorphonuclear cells function assessed by nitro-blue tetrazolium (NBT) test was normal, excluding chronic granulomatous disease which might underly intracellular bacterial infections. The investigation of the IL-12/IFN-γ axis, which has been involved in genetic susceptibility to mycobacterial and salmonella disease was performed. To exclude any functional defect of IL-12/IFN-γ pathway, whole-blood activation was used as a screening approach to identify potential decrease of INF-γ and IL-12 cytokines production in response to BCG alone, BCG plus INF-γ or IL-12 as measured by ELISA. The results for the patient showed normal production of both INF-γ and IL12 in comparison with a group of healthy controls, whereas blood cells from IL-12p40 deficient control patient produced no IL-12 after BCG stimulation (Figure 3).

To assess inflammatory response, PBMCs and CSF cells mRNA gene expression against a panel of cytokines were investigated by quantitative real-time PCR before and after antibiotic treatment (Table 1). PBMCs and CSF cells of the infected host before treatment expressed significantly higher levels of IL-6 and IL-17 mRNA showing a vigorous inflammatory response. No CSF expression of IL-1β and TNF-α was observed. However, in PBMCs, IL-1β and TNF-α expression is elevated and correlates with IL-6 and IL17 levels that decrease after treatment. Moreover, Brucella doesn’t induce IFN-γ mRNA expression in CSF assessed by qRT-PCR but this induction is observed in the patient blood and is more elevated before treatment. This induction is in accordance with a Th1 response observed in peripheral cells. As macrophages of infected host are able to induce the IL-10 production, we subsequently performed IL-10 gene expression. We observed that IL-10 levels are higher at the first sampling in blood and CSF. Comparison of cytokines expression revealed that inflammation in the CSF is due to IL-6 and IL17 however, in peripheral blood this inflammation involves IL-6, TNF-α, IL-1β and IL-17.

Total mRNA was extracted from CSF and PBMCs before and after treatment. After reverse transcription, quantitative RT-PCR was performed for IFN-γ, IL-17, IL-6, IL-1β, TNF-α and IL-10. Samples gene expression was compared with controls (n=17) that consist in a group of healthy persons.

Table 1: mRNA gene expression in CSF (a) and PBMCs (b) of neurobrucellosis patient.

Brucella is still an important human pathogen and is endemic in the developing countries. Several clinical forms have been reported, including meningitis, meningoencephalitis, myelitis, radiculoneuritis, cranial nerve involvement, and demyelinating or vascular disease [4, 5]. Herein, we studied a patient with meningoencephalitis, radiculoneuritis and cranial nerve impairement which is the most common form of NB. In imaging, we can find a normal aspect or inflammation (abnormal enhancement) or WM changes and vascular change. We noted both leptomeningeal enhancement and WM changes at imaging. These findings are classic and CNS demyelisation giving these hyper intensities in WM were confirmed by pathologic studies [6]. The nature of theses WM changes is unknown, but they may be due to immune mediated reaction in the CNS to brucella infection. This WM involvement with leptomeningeal enhancement may mimic other inflammatory or infectious disease, such as neurosarcoidosis, fungal infection, lyme disease or neurotuberculosis. However, the history of exposure to brucella, presence of hearing loss, positive antibody titres, negative tests for M tuberculosis and the marked improvement with under target treatment comfort the diagnosis of neurobrucellosis.

CSF of NB patients reveal a lymphocytic pleocytosis with elevated protein in almost all reported cases with OCB and Ig G synthesis [7]. Albumin secretion in the CSF is a marker of affected Brain Blood Barrier (BBB) and our patient shows an amount of 984 mg/l as we evaluate a mean level of albumin about: 167 mg/l (n=15) in a patient without CNS damage. We could speculate that Brucella reachs CNS in favour of undetermined infection or other condition that might initiate the BBB damage. Brucella invades hosts cells by many mechanisms that prevent activation by the innate immune system. Brucella Toll/interleukin 1 receptor domain prevents Toll like receptor 2 signalling by interfering with MyD88 and inhibits DC maturation cytokine secretion and antigen presentation [8]. Brucella is an intracellular pathogen which induces a strong Th1 response for clearance of the organism as we show by the elevated level of IFN-γ in PBMCs associated with the disease [9]. Brucella also induces inflammatory response, it was reported that astrocytes produce IL-6 and TNF-α in response to bacterial lipoproteins and this inflammatory response lead to astrogliosis (astrocytes proliferate and undergo apoptosis) [10]. In our case, we noticed an inflammatory process which involves IL-6 and IL-17 cytokines with an increase of IL-6 and IL-17 in PBMCs and CSF. Th17 responses have been shown to contribute to host defence v.s Candida and L. monocytogenes and this Th17 response is favoured when IL-6 is present in high quantities [11]. To counter this inflammation, IL-10 is secreted by macrophages and glial cells and acts as an immunomodulator of this inflammation. In a mouse model, it was shown that the lack of IL-10 enhances IFN-γ, TNF-α and IL-17 cytokines what favour brucella clearance [12], IL-10 modulates proinflammatory immune response to brucella infection and the lack of this cytokine increases resistance to this bacteria. In our study, a strong IL-10 response is observed in the CSF, but just more vigorous in peripheral blood.

This work was supported by funds from an intern collaborative Project N°: 10_2013_10 attributed by Institut Pasteur de Tunis and the Tunisian Ministry for Higher Education, Research, and Technology. The funding bodies had no role in the design of the study and collection, analysis, and interpretation of the data and in writing the manuscript.

The study was approved by the local ethics committee of Pasteur Institute of Tunis with the reference number: IPT/PCI-LR11IPT02/22/2013