Langerhans cell histiocytosis (LCH) constitutes a rare group of disorder derived from the macrophages and dendritic cells. The cells in LCH show close similarity to the langerhans cells found in the skin and mucosa and stain positive for CD1a, S100, and CD207 antigens. These cells display the same intracytoplasmic organelles on electron microscopy as seen in Langerhans cells i.e. Birbeck granules. LCH is ten times more prevalent in the paediatric age group as compared to adult population. Females are affected more commonly as compared to the males. LCH can have single- or multi-system types of involvement. Unifocal or multifocal pattern is seen in singlesystem type of disease. The multisystem pattern is often seen in the paediatric population while unisystem pattern is seen in adults. We present case report of a 35 yrs old male patient with multisystemic involvement.

A 35yr old male patient presented to our tertiary care hospital with complaints of pain abdomen, jaundice and a large swelling over the head. Plain radiographs of the head, chest and pelvis were done. Multiple punched out lytic calvarial lesions having bevelled margins were seen on skull radiographs. A large craniectomy defect was also noted on the left side of skull on the plain x-ray suggesting post-operative status (Figure 1 A-B). Plain radiograph of the chest showed diffuse reticular opacities in bilateral lungs with sparing of the bilateral costophrenic angles and well-defined lytic lesion with thin sclerotic rim was seen in left iliac bone, another small lytic lesion was seen in inferior part of right iliac bone, close to the right SI joint in the plain X-ray of the hip (Figure 1 C-D) . Further, contrast enhanced CT scan of the head, chest and abdomen was done to evaluate complete extent of the disease. Contrast enhanced CT scan of the head revealed lytic lesions in frontal and occipital bones on both sides with associated soft tissue component causing destruction of both inner and outer tables of skull. Scans through chest showed multiple variable sized bizarre shaped cysts in bilateral lung parenchyma with sparing of bilateral costophrenic angles (Figure 2 A-B).  Scans through abdomen showed bilobar IHBRD with hypodense thickening seen at the level of primary biliary confluence (Figure 2 C-D). Lytic lesions were seen involving lower lumbar vertebral bodies and in the pelvis (Figure 2 E-F).

The patient underwent ultrasound-guided FNAC from this swelling, which revealed numerous mononuclear and many scattered bi- and multinucleated histiocytes having vesicular chromatin, grooved nuclei with coffee bean appearance and moderate to abundant amount of vacuolated cytoplasm. A provisional diagnosis of Langerhans cell histiocytosis was given. Subsequently, this calvarial lesion was removed surgically. Histopathological analysis of this specimen showed histiocytes, which stained positively for CD1a antigen. Following this, patient was started on chemotherapeutic agent Cladribine. He had no other significant past history or family history. Presently, the laboratory parameters of the patient were as follows: Total -1.85 mg/dl, conjugated -1.74 mg/dl bilirubin and serum ALP -1142U/l levels were elevated. Serum IgG levels were within normal range. Haemoglobin -10.6 gm/dl, total protein- 6.28 g/dL; albumin- 2.74 g/dL were mild reduced. Other parameters were within normal range: RBC count-3.6 × 1012/L, platelet count-318,000/mm3, AST- 40 IU/mL, ALT-37 IU/mL. 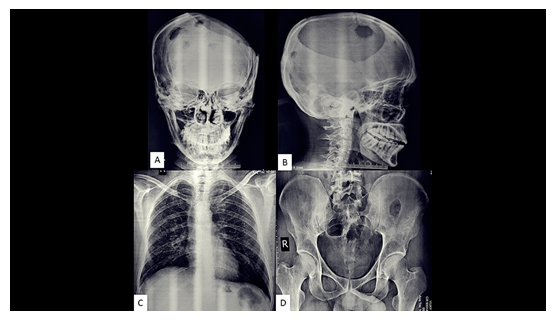 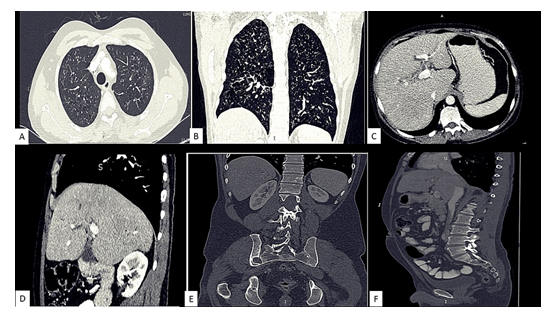 In LCH, there is non-malignant proliferation of the monoclonal dendritic cells in one or multiple organs systems in the body. The annual incidence of the disease in paediatric age group is 2.6-5.4 cases per million [1-6]. However, the exact incidence in adult age group is not known due to rarity of this disease in adults [7, 8]. Both uni-system and multi-system patterns can be seen in adults.  In our case, a multisystem pattern of involvement was observed with involvement of bone, lung and liver seen. Flat bones are involved more frequently than the long bones [9]. Calvarial involvement being the commonest. Typical finding is of a punched out lytic lesion with a bevelled edge due to unequal destruction of out and inner tables of skull. These calvarial lesions due not show any surrounding periosteal reaction [9]. However, bony lesions of LCH at other sites would show periosteal reaction. Early vertebral disease is seen as lytic lesions in the body of vertebra which later progresses to flattening of the vertebral body (vertebra plana). Intervertebral disc space is usually preserved. Long bones like femur, humerus and tibia are more typically involved in children. In the adult age group, plasmacytomas, brown tumours and metastasis form the close differentials.

Posterior pituitary and the pituitary stalk are commonest sites of involvement in the CNS, causing diabetes insipidus. Loss of posterior pituitary bright spot is seen on T1 weighted images. Thickening and enhancement of stalk is seen on post-contrast images [2]. Abnormal areas with white matter signal alteration can be seen in the cerebellum and in the basal ganglia appearing hyper-intense on the fluid sensitive sequences [10]. Lung involvement has a strong association with smoking and is commonly seen in adult patients with this disease [11]. Centrilobular nodules are seen in early stage of the disease. In the early stage, metastasis, miliary tuberculosis, sarcoidosis and silicosis form close differentials of this disease [12]. Late stage is characterised by cysts (usually <1 cm in size), which may coalesce to form large bullae. These bullae can rupture causing spontaneous pneumothorax. The upper and middle lobes are typically involved. Sparing of bilateral costophrenic angles is characteristic. Enlarged mediastinal or hilar lymph nodes or pleural effusion is not commonly seen [13]. Lymphangioleiomyomatosis (LAM) and lymphocytic interstitial pneumonia (LIP) are the main differentials [12]. The lung cysts are of similar size and morphology in LAM and background lung parenchyma is normal unlike LCH [14].  Hepatic involvement in the adult population is rare and is associated with poor prognosis [5]. Hepatomegaly and liver nodules characterize early liver disease. Late liver involvement is characterised by the fibrotic stage, which is mostly limited to the bile ducts and leads to progressive sclerosing cholangitis [15].

Our case represents adult multisystem variety of LCH, which is usually associated with poor prognosis. LCH should be kept in mind as a close differential if such a multisystem pattern of involvement is seen. Good results have been achieved with the use of chemotherapeutic agent Cladribine, which was initiated in our case.