Esophageal achalasia is a neurodegenerative disorder characterized by a lack of primary peristalsis in the esophageal body and improper relaxation of the lower esophageal sphincter (LES) [1]. The annual incidence of the disease in children ranges from 0.10 - 0.18/100000 [2, 3]. It is usually idiopathic and is more commonly seen in males. The basic pathophysiology is the loss of the myenteric (Auerbach’s) plexus in the region of distal esophageal body and LES. These have an inhibitory effect, resulting in a lack of relaxation of the LES in response to a bolus [4]. The child presents with complaints of progressive dysphagia, regurgitation, anorexia, and failure to thrive. The symptoms in achalasia overlap with those of gastroesophageal reflux disease, rumination syndrome, and eating disorders. As a result, the diagnosis is delayed in up to 50% of the cases [5]. The primary diagnosis of achalasia is made by Barium swallow study and confirmed by esophageal manometry. A dilated non-peristaltic esophagus showing smooth tapering is seen at the gastroesophageal junction, giving the classical ‘bird beak’ configuration is seen at the barium swallow study [6].

Esophageal manometry study shows elevated resting LES pressure, absent or low amplitude peristalsis in the distal esophagus, and lack of relaxation of the LES at the time of swallowing [5, 7]. However, a diagnosis of achalasia cannot be ruled out based on, negative or equivocal manometry study, as the function of LES, is heterogeneous in the paediatric age group [8]. An esophageal biopsy is avoided in the children, further increasing reliance on barium swallow study. We present a review article highlighting the clinical presentation, differentials, diagnostic studies, and treatment options available for cases of paediatric primary (idiopathic) achalasia.

Achalasia is a routinely investigated motility disorder affecting the esophagus [9, 10]. In the paediatric population, the disorder is diagnosed usually after the age of 7 years. Children present with complaints of progressive dysphagia initially to liquids then to solids, weight loss, and vomiting. Atypical symptoms like recurrent pneumonia, aspiration, nocturnal cough, hoarseness, and feeding difficulties may also be seen [8, 11]. Due to this varied presentation, the diagnosis is often delayed. Clinical differentials include gastroesophageal reflux disease, eating disorders, asthma, and eosinophilic esophagitis [11]. Around 50% of the cases have previously received long-term antacid and prokinetic therapy before a confirmatory diagnosis is established [5].

Single or double-contrast barium swallow study with low (90% w/v) or high (200% w/v) density barium can be done. Alternately, single or double-contrast upper gastrointestinal series can also be performed. Sequential spots during swallowing are taken under fluoroscopic guidance with the patient in supine position with focus on the distal esophagus and GEJ. A characteristic pattern of dilated distal esophageal body with smooth, tapered, symmetric area of narrowing is seen at the GEJ giving a ‘bird beak configuration’ (Figure 1A). Tertiary contractions are seen in the distal esophageal body in around 90% cases. ‘Tram track sign’ due to hypertrophy of the muscularis propria can be seen in the distal part of the esophagus close to the GEJ in 60% of the cases. (Figure 1B) [12]. 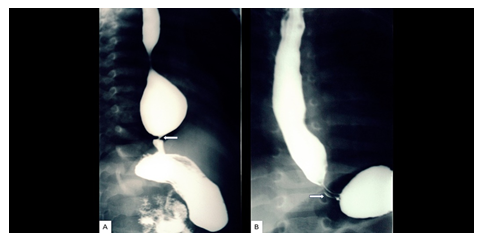 High-resolution manometry (HRM) is considered the gold standard for diagnosing achalasia in adults as established data on the LES pressure and function are available in the adults. However, no such established data is available for the paediatric population. (13,14). The LES pressure is variable in the paediatric population and is said to be age dependent. LES function is also more heterogeneous in children as compared to the adult population. (15,16). In children with achalasia, the resting LES pressure is high and there is a lack of or partial relaxation of the LES is seen in response to swallowing. Absent or low amplitude peristalsis is seen in the distal esophagus. (5,7). Endoscopy or endoscopy with biopsy can be used as adjuncts for diagnosing this disorder.

Both medical and surgical therapy are available for this disorder. Medical therapy can provide short term relief to the child by causing a decrease in the LES pressure and can be given as a short term treatment before definitive surgery is performed. Drugs causing smooth muscle relaxation like calcium channel blockers form part of the medical therapy [17]. Endoscopy guided local injection of botulinum into the LES can be done. It causes a reduction in the resting LES tone [7]. Pneumatic dilatation, in which balloon dilatation of the contracted esophageal segment is done can be undertaken. Around 90% success rate in paediatric cases treated with multiple pneumatic dilations has been reported by Hamza et al. [18]. The advantages of balloon dilatation include shorter length of stay, quicker recovery time, and decreased cost [19].

Surgical therapy is regarded as the treatment of choice as it offers a definitive cure rate in most cases. Laparoscopic Hellers myotomy is the preferred surgery for paediatric as well as adult cases of achalasia [20]. Peroral endoscopic myotomy (POEM) is a type of natural orifice transluminal endoscopic surgery (NOTES) gaining popularity for the treatment of achalasia since the last decade. POEM has the advantage of both dilatation plus myotomy procedures combined [21].

Achalasia is a motility disorder of the esophagus. The disorder has less prevalence in children than adults. Barium swallow forms the mainstay of diagnosis in the paediatric patients as the results of manometry are variable in this age group. Endoscopic biopsy is reserved for the indeterminate cases. Treatment can be both medical or surgical approaches and is decided after a multidisciplinary consensus.