An 84-year-old gentleman was admitted to hospital with a four-week history of progressive shortness of breath. He was an ex-smoker with a background of severe COPD and subpleural upper zone fibrosis. He had an extensive occupational history that included exposure to pigeons, tyre materials, cast iron dust, cleaning products, wood dust, petrol fumes and hay. Recent outpatient spirometry had shown a general decline in his lung function over the course of 4-months; his FEV1 decreased from 1.03L to 0.73L and his FVC decreased from 1.97L to 1.26L. In the days leading up to his admission, he required frequent use of his ambulatory oxygen for symptomatic relief.

On clinical examination he was dyspnoeic at rest. There were no features of connective tissue disease (CTD). His blood gas showed type 1 respiratory failure and he was therefore managed with oxygen. Although his haematology and biochemistry blood results were unremarkable, his MPO-ANCA titre was positive at 48.0 EU. His CXR showed marked bilateral pleural thickening and a small right-sided pneumothorax. A subsequent CT-thorax confirmed these changes and also revealed advanced apical fibrosis and traction bronchiectasis [Figure 1-3]. These are classical radiological features of pleuroparenchymal fibroelastosis (PPFE). Profound desaturation off of oxygen however required a repeat CT-thorax 2-weeks later. This showed similar stable appearances to the previous CT.

Extensive discussion in the respiratory MDT refined the diagnosis as PPFE. He was therefore started on long-term corticosteroids. The association between MPO-ANCA and PPFE was unclear and may have been coincidental. Although the differential diagnosis was broad and included an exacerbation of COPD, pulmonary embolism, interstitial lung disease or hypersensitivity pneumonitis, the patient’s history, examination and investigation findings made all of these diagnoses unlikely. Furthermore, because of his frailty and poor lung function, it was inappropriate to perform a diagnostic lung biopsy. Nevertheless, he improved symptomatically with steroids and was later discharged home on long-term oxygen therapy. 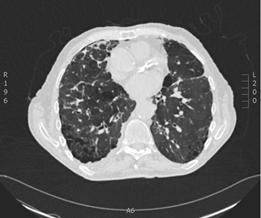 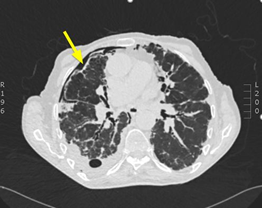 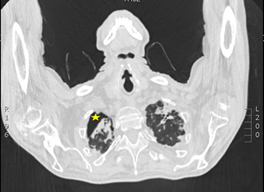 PPFE is a rare disease which is characterized by progressive fibroelastosis of the visceral and subpleural parenchyma of the upper lobes of the lung [1]. It often presents with dyspnoea, cough and weight loss which makes it difficult to differentiate from other respiratory complaints. Although the aetiology is unclear, many cases have been associated with bone marrow transplantations, chemotherapy, occupational exposure and chronic infections [1, 2]. Some cases have also suggested a genetic predisposition and a possible association with CTDs such as ankylosing spondylitis [1, 2].

Although our patient had a positive MPO-ANCA, he showed no features of autoimmune disease. Furthermore his radiological pattern of fibrosis was unusual of CTD-associated pulmonary fibrosis which is usual interstitial pneumonia. Therefore the likely aetiology of PPFE in his case was either idiopathic or secondary to his previous occupational exposure. In PPFE, CXR findings include marked bilateral apical pleural thickening and pneumothoraces [1]. Classical CT findings include similar features and also traction bronchiectasis, reticular abnormalities and lymphadenopathy [1]. Although a surgical lung biopsy is required for a definite diagnosis, this can be impractical as many patients are often not suitable for surgery. In these cases, a diagnosis is made in an MDT setting contextualizing the investigative findings with the patient’s background.

The prognosis of PPFE is variable [2, 3]. Although no specific treatment has been shown to modify the progression of disease, empirical treatment with corticosteroids, immunosuppressive agents and N-acetylcysteine have shown some transient benefit in other case reports [1, 3]. Lung transplantation is a potential option in surgically fit candidates.