Basal cell carcinoma (BCC) is the most common form of skin cancer, mostly affecting eldery patients and carrying an excellent prognosis [1]. The first line treatment is usually represented by surgical excision, but, for those patients not eligible for surgery or radiotherapy, Hedgehog (HH) inhibitors represent a safe and efficient therapeutic option [1]. The aberrant activation of HH signaling underlies the pathogenesis of BCC [2]. This aberrant activation is due to a loss of function of PTCH1, which normally acts to inhibit the signaling activity of SMO, a seven-transmembrane protein. Following the pivotal ERIVANCE BCC study, the small molecule inhibitor of SMO Vismodegib was the first drug to be approved in the USA and Europe for the treatment of locally advanced (laBCC) or metastatic BCC [3]. The second SMO inhibitor, approved in 2015, was the small molecule sonidegib. Results from the BOLT study demonstrated efficacy and tolerability in the treatment of laBCC [4].

Herein we report the case of a 99-year-old Caucasian man, with a 10-year history of non-melanoma skin cancer, who was referred to our department in 2017 for a painless slow-growing pink lesion on the left lower eyelid and multiple lesions involving trunk and upper arms. Physical examination was notable for a massive eyelid involvement with consequent ptosis, multiple ulcerated nodules on the nose and multiple pink-red scaly patches on the back and shoulders (Figure 1). 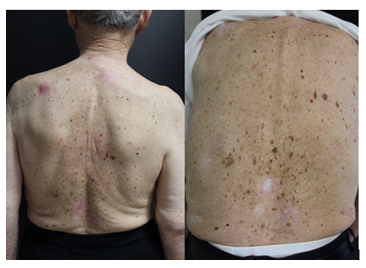 Figure 1: a) multiple Basal cell carcinomas on the back of a 99 years old patient previously treated with Vismodegib; b) complete response to the treatment with Sonidegib after 4 month of therapy.

Dermoscopy and histologic evaluation revealed a diagnosis of multiple BCCs and a laBCC of the eyelid. His medical history included ischemic cardiopathy and nephropathy. Whole body computed tomography excluded any bone, lymph node or visceral involvement.

Given the likelihood that surgery on the periorbital area would result in severe disfigurement and loss of function, the patient was started on Vismodegib 150 mg/die. Although the patient experienced a partial response, Vismodegib was interrupted after eight months for the onset of second grade adverse events including severe weight loss, dysgeusia and muscle spasms. Therefore, in November 2020, patient was started on Sonidegib 200mg/die. After 4 months of therapy, skin lesions regressed with partial healing of the eyelid lesion and complete clinical remission of the numerous superficial and nodular BCCs. The few adverse events experienced, such as grade 1 muscle cramps and loss of appetite, were tolerable and manageable. Therefore, Sonidegib treatment was continued for 13 months and the patient has remained in complete remission until his death, due to rapid complications of Coronavirus 2019 disease in December 2021, after few weeks from Sonidegib discontinuation.

This case report demonstrates the tolerability and efficacy of a re-challenge with sonidegib after vismodegib discontinuation in a near-centenarian patient, with multiple comorbidities and refractory laBCC. Currently, there is growing evidence of successful re-challenge with a second hedgehog inhibitor in case of insufficient response or adverse events related to the first drug. On this matter, Piccerillo et al described the efficacy of Sonidegib after Vismodegib discontinuation due to severe asthenia in an 89-year-old patient with Gorlin-Goltz syndrome. This case from Piccerillo et al showed that recurrence after HH inhibitor discontinuation following response does not constitute resistance, and therefore re-challenge with a drug of the same class may be considered [5]. Given the lower overall incidence and slower onset of most adverse events, sonidegib might represent a better re-challenge option in laBCC patients with post-discontinuation recurrence [6]. Furthermore, Herms et al observed that, after vismodegib discontinuation, the majority (85%) of patients who relapsed and were re-treated with vismodegib achieved an objective response [7]. On the contrary, patients with advanced BCCs that were previously resistant to treatment with vismodegib similarly demonstrated treatment resistance with sonidegib [8]. However, Yoon et al reported the case of a laBCC patient who experienced a complete response using sonidegib and pulsed itraconazole after resistance to Vismodegib, showing that a combination therapy that targets multiple sites within the same pathway appears promising to overcome secondary resistance [9]. Vismodegib and Sonidegib are two modern drugs both involved in the inhibition of the HH pathway. Previous studies have shown similar response rates and type of adverse events, namely muscle spasms, elevated CK, alopecia, and dysgeusia [3,4]. The main difference between the two drugs is the pharmacokinetic profile. Sonidegib is highly lipophilic, has a larger volume of distribution than Vismodegib, and a 6 times higher steady-state concentration in the skin than in plasma [4]. These evidences suggest that sonidegib is more extensively distributed in the skin compared with vismodegib, which may explain potential differences in efficacy and toxicity between them [10]. Although future clinical trials are needed to better understand the clinical difference between the two HH inhibitors currently approved, Sonidegib represent a valid therapeutic option in laBCC patients who discontinued a previous treatment with Vismodegib and then experienced recurrence.