Recovery of Sudden Cardiac Death- Role of Chain of Survival: A Case Report

Sudden cardiac death consists in a sudden cardiac collapse or heart failure secondary to arrhythmia, which unexpectedly occurs within the first hour after the onset of symptoms. Fibrillation and ventricular tachycardia are two arrhythmias responsible for most sudden cardiac arrest events. Others arrhythmias that produce this is asystole and pulseless electrical activity. The backbone in the treatment of sudden cardiac death is the immediate activation of the Chain of Survival with de early implementation of CPR and defibrillation, thus improving the prognosis of survival of patients. The automated implantable cardioverter defibrillator is a device with a high chance of reverting events caused by these arrhythmias to a sinus rhythm. We report a case of a 40-year old man who presented symptoms 20 minutes before being admitted to emergency services. An electrocardiogram was obtained, showing presence of QRS complex overlap in DI, DII and aVF. A skull computerized axial tomography scan showed no evidence of cerebral edema or located injuries. An echocardiogram showed normal heart size, left ventricle ejection fraction of 70%, valves without injuries, and no data regarding pulmonary arterial hypertension. Five days after the cardiac arrest event, an AICD was implanted as primary prevention strategy.

Sudden cardiac death (SCD) consists in a sudden cardiac collapse or heart failure after heart arrhythmia in subjects with or without heart disease, and causes death if not treated within the minutes after its onset. Some of these subjects show symptoms shortly before the event, but in order to establish a definitive diagnosis of a SCD episode, the symptoms should last for at least one hour [1].

An event is considered SCD if it occurs unexpectedly within the first hour after the onset of symptoms or if it happens in the absence of any witnesses when the deceased was seen in good condition 24 before dying [2].

There is data of SCD events from long ago. The Ebers papyrus states “if a subject shows signs of pain in the arm and the left half of the thorax, it is a death threat”. Later in China, 2,500 years ago, Chio matched SCD with arrhythmia when he said, “intermittent pulse is a predictor for imminent death”. Hippocrates also claimed “intense precordial pain irradiating to the collarbone and the back is a sign of a bad prognosis” [3].

SCD is a global public health issue. It is a leading cause of death in children and young adults. The most common causes of SCD are congenital abnormalities, presumed primary arrhythmia and coronary artery disease [4]. However, a certain percentage of autopsy-negative cases of SCD in the young (< 35 years) remain unexplained even after a post-mortem genetic testing. Autoantibodies against cardiac proteins may be potentially involved in the pathogenesis of different heart diseases and in the occurrence of unexplained SCD [5]. It has been reported in different locations and it still makes up 20-30% of cardiac-related deaths; the incidence is 32.1 events per million inhabitants/year in France, 41.3 events per 100,000 inhabitants/year in China, and between 70 and 155 events per 100,000 inhabitants/year in the USA. We still don’t know the incidence and prevalence in Mexico, but we can estimate the number of victims of SCD; in 2008, 59,579 adults died of ischemic cardiomyopathy, and is likely that in at least 30% of that population it was a sudden event, which represents 17,873 events/year [6].

Ventricular fibrillation (V-fib) and ventricular tachycardia (VT) are two arrhythmias responsible for most sudden cardiac arrest events. Other rhythms causing this event are asystole and pulseless electrical activity. The involvement of substrates and triggers of arrhythmia, substrates plus ischemia, myocardial fibrosis and genetic anomalies are required for an episode of V-fib or VT to happen [6]. Non-pacemaker myocardial cells from atriums and ventricles, which in normal conditions don’t show spontaneous activity, could show automation properties. A significant difference between an altered normal automatism and an anomalous automatism is that the latter is less sensitive to suppression by overstimulation; in these circumstances an automatic locus can exhibit features from other mechanisms of arrhythmia (VT) [7].

Chain of survival (COS) aims to demonstrate the interrelationship between key stages of resuscitation and emphasises the need for all links to be fast and effective in order to optimize the chances of achieving neurologically intact survival. COS focuses on specific interventions rather than the potential for the effectiveness of each. The contribution of each of the four interventions (1. Early recognition and call for help, 2. Early CPR, 3. Early defibrillation and 4. Post-resuscitation care) diminishes rapidly as patients succumb at each stage and the actual attrition rate results in rapidly decreasing numbers of patient progressing along the chain, with only a small minority of patients who enter the initial link in the COS actually progressing through to the final link. Greatest benefit in improving outcome will be achieved by focussing on improving care at links in the chain where there is the greatest number of patients [8]. COS could lead to the survival of a considerable number of SCD victims if executed quickly. Those actions must be perfectly connected with each other to be efficient [9]. From “Early recognition and call for help” to “Early CPR”. Although multifactorial, a surprisingly low proportion of patients identified by the Emergency Medical Services (EMS) as being in cardiac arrest progress to an actual resuscitation attempt by and EMS responder. Although bystander rates of resuscitation are generally improving globally, the majority of patients in cardiac arrest still receive their initial CPR by an EMS responder. From “Early recognition and call for help” to “Early defibrillation”. The proportion of patients in a shockable rhythm as their initial rhythm has declined over the past 20 years. Currently, are reporting shockable initial rhythms in approximately 25% of cardiac arrests. From “Early recognition and call for help” to “Post-resuscitation care”. Sustained return of spontaneous circulation has been reported in 25% of cases [8].

The backbone of effective treatment of sudden cardiac death is early defibrillation, an essential link within the COS [9]. The automated implantable cardioverter defibrillator (AICD) is a device with a high chance of reverting V-fib or VT to a sinus rhythm, since it is able to defibrillate any of these arrhythmias in less than 15 seconds. The AICD has proven its value both in primary prevention of SCD in subjects with an ejection fraction less than 35%, and in secondary prevention in subjects that already survived a sudden cardiac arrest event [6]. The AICD successfully treats arrhythmic events and reduces total mortality in patients after the first occurrence of cardiac arrest.

The MADIT study represents the first primary prevention analysis using therapy involving AICD; this study showed a significant decrease in mortality rates with conventional therapy [10]. The MADIT II study is the sequel of the previous study, in which a significant benefit in patients with previous myocardial infarct, low ejection fraction, spontaneous non-continuous VT and continuous VT was already proven; it was conducted in 71 USA centers and 5 European centers, and it included over 1,200 patients [11]. On the other hand, AVID study compared the effectiveness of anti-arrhythmic drugs (empiric amiodarone) versus AICD in patients with documented severe VT; this study had a premature termination once it proved that mortality rates were decreased by 39% in the group with implanted AICD [12]. Survival rate after 5 years is 89.9% [13].

Patient: 40-year-old male, public transportation driver with relevant cardiovascular background, such as a) obesity; b) sedentary lifestyle; c) occasional consume of alcohol; and d) occasional smoker. The symptoms started 20 minutes before being admitted to emergency services; he was sitting at home; he showed signs of hyperextension of both arms, as well as arched neck and conjugate gaze deviation (descerebrate posture) without recovering his alert state, which is why he was assigned to our unit 5 minutes before an episode of respiratory arrest. 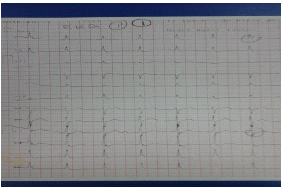 Figure 1: Patient electrocardiogram after CPR upon arriving to emergency services.

During his stay in the Shock area 48 hours after the event, the tubes were successfully removed. The neurological assessment showed no signs of cognitive impairment, no focalization data and a Glasgow Coma Scale (GCS) 15/15.

A coronarography was performed, and it showed healthy arteries. Five days after the cardiac arrest event, an AICD was implanted as primary prevention strategy (Figure 2), which was placed on the eighth day with the following conclusions: a) idiopathic VT; b) recovery from sudden cardiac death; c) VDD BIOTRONIK pacemaker implanted. He was discharged 9 days after his admission, with GCS 15/15, neurologically intact, and he was scheduled for several follow-up cardiology appointments. 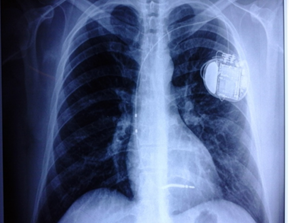 Figure 2: Thorax radiography taken before discharging the patient, in which the AICD is shown.

We would like to thank to Guillaume Marc Jackie Leriche for supporting us to translate this manuscript.