A 43-year-old female patient with past medical history of superficial DVTs, nicotine dependency, and morbid obesity presented with shortness of breath and syncope. She was found to be tachycardic with elevated D-Dimer. Emergent chest-CT was performed which revealed large bilateral pulmonary emboli. As her vitals were within normal limits at that time, there were no indications for tissue plasminogen activator. Later, patient started having fleeting episodes of bradycardia and hypotension with drop in systolic pressure over 40mmHg on slight movements. Being in a rural hospital with limited resources, the decision was made to transfer the patient. Following the transfer, the patient was pronounced deceased due to complications related to her condition. We report this case to emphasize the importance of early recognition and management with thrombolytic therapy or mechanical thrombectomy if contraindications exist in patients with recurrent syncope in a rural setting.

Acute pulmonary embolism (PE) is a form of venous thromboembolism (VTE) that is common and sometimes fatal. The clinical presentation of PE is variable and often nonspecific making the diagnosis challenging. Recurrent syncope is a rare presentation of pulmonary embolism that is estimated to occur in 10% of cases [1]. It can be associated with quick deterioration and poor prognosis. Early recognition of syncope as a mechanism of pulmonary embolism is crucial as the 30-day mortality is significantly higher in these patients [2]. Hence, intervention and early treatment are critical to reduce mortality. We present this case to emphasize the importance of early thrombolytic therapy in patients presenting with syncope-associated pulmonary embolism.

A 43-year-old female initially presented to the emergency department with shortness of breath and syncope. She has a history of superficial DVTs, nicotine dependency, and morbid obesity. On presentation, she was alert and oriented with normal neurological findings. She had an elevated heart rate of over 120 with an oxygen saturation of 90% on 2L NC and was hemodynamically stable. Her labs were significant for leukocytosis, an elevated D-Dimer of 2.85 ug/mL, BNP 17400 pg/mL, and an initial troponin of 0.063ng/mL. An emergent chest-CT was performed which revealed large bilateral pulmonary emboli (Figure 1). The patient was subsequently started on full-dose Lovenox and sent to the progressive care unit for further evaluation and management. Overnight, the patient was noted to have an episode of syncope that was associated with cyanosis, tremors, and diaphoresis. At that time, her blood pressure was stable at 130/80 as she remained mildly lethargic. As the patient did not meet formal indications for systemic tissue plasminogen activator (tPA), she was immediately transferred to the ICU for further evaluation and closer monitoring of her symptoms. During the day, an echocardiogram was performed which revealed a severely dilated right atrium and ventricle with a right ventricular systolic pressure of 66.2 mmHg (Figure 2). The patient had fleeting episodes of bradycardia and hypotension with a noted drop of over 40 mmHg in her systolic pressure on slight movements. Given her rapid decompensation and being in rural setting with limited resources, the patient was immediately transferred to a facility capable of performing intervention catheter-directed thrombolysis for treatment. Following the transfer, the patient was pronounced deceased due to complications related to her condition. 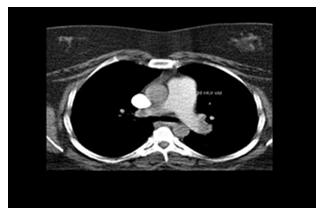 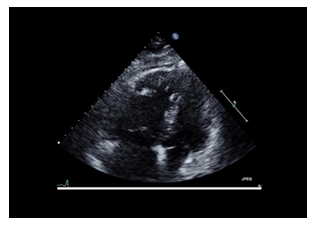 Pulmonary embolus (PE) refers to the obstruction of the pulmonary artery or one of its branches by material such as thrombus, tumor, air, or fat that originated elsewhere in the body. It can be acute, subacute and chronic based on the timeline of its presentation. It is also classified based on the presence or absence of hemodynamic stability, which is associated with right ventricular strain which is also called massive or high-risk PE. PE has a wide variety of presenting features, ranging from no symptoms to shock or sudden death. The most common presenting symptom is dyspnea followed by pleuritic chest pain, cough, and symptoms of deep venous thrombosis such as lower extremity pain, swelling and tenderness. Hemoptysis is an unusual presenting symptom. Rarely do patients present with shock, arrhythmia, or syncope. Diagnosis usually starts with a high index of clinical suspicion along with elevated D-Dimer and imaging includes computed tomographic pulmonary angiography and less commonly, ventilation perfusion scanning or other imaging modalities. For patients who are hemodynamically unstable and in whom definitive imaging is unsafe, bedside echocardiography or venous compression ultrasound may be used to obtain a presumptive diagnosis of PE to justify the administration of potentially life-saving therapies such as TPA.

In this case, the patient presented to a rural hospital with syncope with subsequent testing showing large bilateral pulmonary embolism. Hence, she was started on full dose Lovenox. Despite having normal vital signs and being on anticoagulation, she deteriorated overnight with recurrent episodes of syncope and hypotension manifested by drops in systolic blood pressure to more than 40 mmhg. Due to limited abilities in a rural setting, the decision was made to transfer to a facility capable of catheter directed thrombolysis. Unfortunately, following her transfer she was pronounced dead. Therefore, the distinction between hemodynamically stable and unstable PE is important because patients with hemodynamically unstable PE are more likely to die from obstructive shock as a result of severe right ventricular failure. Syncope associated pulmonary embolism can be fatal and attributed to rapidly decreasing cardiac output if not treated emergently.

Syncope-associated pulmonary embolism is a medical emergency that can be associated with poor prognosis and rapid decompensation. With a 90-day mortality rate of 17.4% [3] pulmonary embolism requires heightened clinical suspicion and immediate therapy to prevent fatal pulmonary and cardiac complications. While current guidelines indicate that systemic and catheter-directed thrombolysis are reserved for those with hemodynamic instability, those presenting with recurrent syncope may predict rapid decompensation and may also benefit from early thrombolytic therapy or mechanical thrombectomy if contraindications exist.

The Authors have no conflicts of interest to report.

This Manuscript received no fund.

Verbal Consent was obtained directly from the patient prior to her transfer.

Our institution does not require ethical approval for reporting individual cases or case series.