Utilization of Tranexamic Acid for Recurrent Angioedema after ARB Discontinuation: A Case report and Review of the Literature

The incidence of ARB-induced angioedema is an insufficiently reported incidence in medical literature, due to its infrequent incidence and confusion with other confounding factors. Any time patients are on medications that involve the RAAS pathway, suspicion needs to be raised concerning their involvement in angioedema. Cessation of the offending agent is the only definitive way to prevent attacks. Although not well described in the literature, there are reports of recurrence of angioedema after cessation of individuals previously taking ARBs. This raises the question of whether in this transition period after removal can we prophylactically stop an attack?. We present the case of a 62-year-old female who was hospitalized for recurrent angioedema three times before it was decided to stop Olmesartan. During the third hospitalization, she was given tranexamic acid to aid in symptom management along with steroids and antihistamines. After discontinuation, she presented twice to the ER with similar symptoms. We discuss the need for surveillance of angioedema attacks after iatrogenic kinin-mediated angioedema along with the literature on tranexamic acid utilization during this latency period to help prophylactically reduce intermittent attacks.

Tranexamic acid is mostly recognized for its antifibrinolytic mechanism of action [1]. Another less well-known use is for treatment in kinin mediated-angioedema [2]. Angioedema is defined as a localizing and limited edema of subcutaneous and submucosal tissues caused by increase in vasculature permeability by release of bradykinin [3]. Most cases of drug-induced reactions are from ACE inhibitors (ACEi). ARB-induced angioedema has a significantly lower incidence than ACE-inhibitor-induced [4]. Studies have shown that Losartan use can increase bradykinin levels [5]. This is thought to be due to possible induction of AT2 receptors from an increase in angiotensin II from ARB blockage of AT1 antagonism [6]. This mechanism can be further seen in Figure 1. 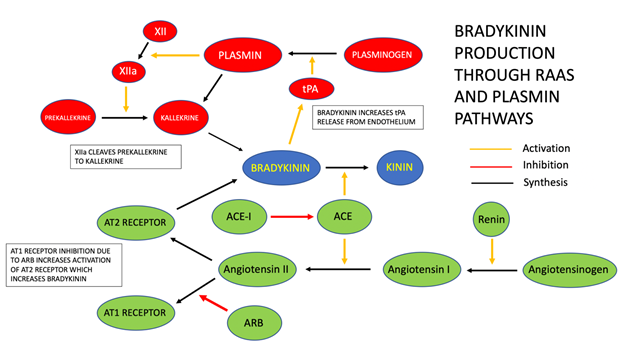 The long-term management beyond removal of the offending agent is not clear, and there are no specific guidelines [3]. Current treatment regimens available for use are tranexamic acid, danazol, FFP, C1INH concentrates, ecallantide, and icatibant [2].

Studies have shown that tranexamic acid may be used in emergent situations to provide treatment for angioedema episodes. Tranexamic acid works by blocking the activation of plasminogen to plasmin, which in turns leads to down-regulation of bradykinin, a pro-inflammatory peptide implicated in angioedema [7]. One case review series demonstrated that when treated prophylactically, the number of attacks in 17 patients had a reduction by 75% of attacks, 10 showed slight reduction, and 10 had no difference in number of attacks [8]. Although it should be noted this study did include those with hereditary angioedema and not solely iatrogenic as pertains to our case. There are some individuals, depending on severity of angioedema attack, that have continued on their ACEi or ARB with tranexamic acid. We discuss a case of suspected ARB-induced angioedema treated with tranexamic acid who had recurrent angioedema episodes in the proceeding months after cessation and also review the literature on using tranexamic acid as prophylaxis for these attacks.

We present the case of a 62-year-old Caucasian female who had been hospitalized three times in the past year for symptoms of angioedema before Olmesartan, which she had been taking for many years, was discontinued as it was thought to be the cause of her recurrent episodes. She has a past medical history of GERD, DM II, HTN, COPD, and gout. On admission she was currently taking Pravastatin, Hydralazine, Acetaminophen, Furosemide, Sotalol, Duloxetine, Albuterol, Tiotropium, Glipizide, Empagliflozin and Olmesartan.

The episodes of angioedema started earlier in the previous year, and she had never had any signs or symptoms of facial swelling before this time in the past. Her first episode of facial swelling was thought to have been due to contrast or recently started gout medication (allopurinol/colchicine). The second was thought to potentially be from recent clindamycin use or chlorhexidine. On the third admission, she described developing angioedema after administration of three Tylenol for a headache. A list of her allergies in the EMR on admission date can be seen in Table 1.

Table 1: Allergies listed in the EMR at admission in which Olmesartan was discontinued. Many of these were added in conjunction with previous visits associated with angioedema including: Clindamycin, Acetaminophen, and Iodinated Contrast Media.

During her previous episodes, she was treated with antihistamines and steroids which abated her symptoms. Careful review of her previous medical history was done via chart review along with her past medications for any possible interactions or adverse effects causing her angioedema. During this review, it was noted she had been taking Olmesartan for many years previously. Taking Olmesartan was also suspected to be the cause of her attacks because it was the common factor in all of her angioedema episodes.

On admission, Olmesartan was not restarted. The patient initially presented with swelling of her face, mouth, lips and tongue with no difficulty breathing and no need for any O2 or ventilation. Macroglossia was extremely evident during initial exam. Upon arrival, she was immediately treated with IV methylprednisone 1g and Benadryl 50mg with improvement in symptoms just like her previous hospital stays. On day two of admission, she again developed facial and tongue swelling. In addition to steroids and antihistamines, this time 1g of tranexamic acid was also used and proved to aid in resolution of her symptoms. On the third day of admission she again developed symptoms although not as severe as initial presentation. She was given two doses of 1 g tranexamic acid approximately 10 minutes apart. Approximately two months after the preceding admission, the patient again developed symptoms of angioedema with trips to the ER twice in two weeks. She was given Benadryl and an epinephrine pen before coming to the hospital. Her treatment during both of these episodes were with steroids, antihistamines, and 1g of tranexamic acid all with symptomatic resolution. To date, she has not had any more visits to the ED with complaints of swelling since that time.

This case represents what the authors believe are points that physicians may be unaware of due to the infrequency of which these attacks occur. Our case highlights utilization of tranexamic acid in angioedema when antihistamines and steroids were insufficient. While tranexamic acid seemed to help with recurrence when steroids were not enough, we did not prescribe it for our patient upon discharge. There is evidence to suggest that maintenance therapy with tranexamic acid can help reduce attacks and recurrent hospitalizations. In a retrospective trial, there were 64 cases of angioedema treated with TA over a period of 6 months with a 75% reduction in 17 patients [8]. Others in the study had fewer attacks, or no change at all. Another systematic review by Horiuchi et al. examined tranexamic use prophylactically came with mixed results, in both short- and long-term prophylaxis with tranexamic acid [9]. This review was limited by many articles assessing in a qualitative manner rather than quantitative. There is no consensus currently on using tranexamic acid prophylactically to help reduce recurrence of symptoms. The authors speculate that given its relatively low side effect profile and cost, giving tranexamic acid in the interim period after discontinuation of an ARB or in suspected iatrogenic induced angioedema may be a suitable option to help limit attacks after removal.

While with ACEi and not ARBs, one retrospective study found that 41% of 111 patients with previous angioedema episodes experienced relapse. A French retrospective study that did include ARBs showed many interesting data points concerning patients with ARB-induced angioedema after discontinuation of therapy. The average time to onset of recurrence was approximately 96 days. Further breakdown demonstrated 75% developed recurrence in the first three months, while 37.5% were in the first month [10]. Our case falls within the time frames seen in this study. Of note, the previous study also had one patient that described antiseptic mouth wash as a precipitator. This adds validity that there may have been other interactions which our patient did describe while on Olmesartan. This further highlight that while discontinuation of the offending agent may be the best appropriate therapy, there may still a risk of angioedema that physicians need to be aware of. This again is where the authors would like to bring this to light that tranexamic acid may be appropriate as a maintenance therapy to help prevent these recurrences in such cases.

Overall, we believe that our patient’s angioedema was due to Olmesartan. During previous attacks requiring hospitalization, Olmesartan had been the common underlying factor. While there were recurrent episodes, literature supports that this can occur. To date she has had two hospitalizations in six months after cessation. As outlined previously, we did not do further workup for other etiologies at the time of initial presentation, and it was not completed on subsequent visits. That stated, we aim in this report to highlight to readers: 1) further workup for acquired C1 inhibitor deficiency; 2) possibility of use of tranexamic acid in the acute setting of an angioedema attack in lieu of other approved therapies; 3) the possibility of tranexamic acid prophylaxis after a precipitating angioedema events to prevent recurrence. Literature supports our experience of recurrence that can continue within a few months after discontinuation of therapy. No new hypertensive medications were added after Olmesartan removal to the authors knowledge outpatient.

This research received no specific grant from any funding agency in the public, commercial, or not-for-profit sectors. The authors are accountable for all aspects of the work in ensuring that questions related to the accuracy or integrity of any part of the work are appropriately investigated and resolved.

All authors have completed the ICMJE uniform disclosure form. The authors have no conflicts of interest to declare.

The authors are accountable for all aspects of the work in ensuring that questions related to the accuracy or integrity of any part of the work are appropriately investigated and resolved. All procedures performed in studies involving human participants were in accordance with the ethical standards of the institutional and/or national research committee(s) and with the Helsinki Declaration (as revised in 2013). Verbal informed consent was obtained from the patient.