Varicella-Zoster virus (VZV) reactivation is known to cause vascular remodeling and creating a hypercoagulable state, which can result in vasculopathy and subsequent thrombotic complications. Frequently, these complications involve intracranial and extracranial arteries leading to ischemic stroke, cerebral aneurysm formation, subarachnoid hemorrhage, cerebral vasculitis, and giant cell arteritis. Symptoms involving veins, such as cerebral sinus thrombosis, deep venous thrombosis, and pulmonary embolism, are rare. VZV reactivation is classically identified in neuronal ganglia that are derived from neural crest cells, primarily the dorsal root ganglia with the typical zoster dermatomal rash. In addition to the dorsal root ganglia, the enteric nervous system and adrenal glands are also of neural crest origin. However, VZV reactivation in these regions is rarely recognized due to a lack of cutaneous innervation. Enteric VZV reactivation can present with vague gastrointestinal symptoms instead of the typical zoster skin rash, which may be overlooked and delay the diagnosis. We report a rare case of VZV reactivation in the enteric nervous system and adrenal gland leading to vasculitis and subsequent Subarachnoid Hemorrhage (SAH), multifocal ischemic stroke, right Internal Carotid Artery (ICA) dissection, Deep Venous Thrombosis (DVT), and Pulmonary Embolism (PE).

VZV or Human Herpes Virus 3 (HHV-3) is a double-stranded DNA that causes varicella or chickenpox during primary infection, then becomes latent in the ganglionic neurons derived from neural crest cells. VZV infects more than 95% of the United States population, and about 50% of the people will suffer from VZV reactivation later in life. The most common complication after VZV reactivation is postherpetic neuralgia [1]. However, in recent decades, increasing evidence has revealed that VZV can cause vasculopathy and subsequent thrombotic complications [2]. VZV can cause vascular remodeling and contribute to a prothrombotic endothelium causing a hypercoagulable state by inhibiting anticoagulants and antithrombotic pathways, in addition to increasing binding sites for inflammatory cells and platelets on the endothelial cell surfaces [3]. Most often, vasculopathy can cause giant cell arteritis [4], ischemic optic neuropathy [5, 6], ischemic stroke, aneurysm, subarachnoid hemorrhage, and in rare cases, peripheral vascular diseases, such as deep venous thrombosis and pulmonary embolism [7-9].

Based on brain imaging, features common to VZV vasculopathies include unifocal or multifocal lesions; in particular, the grey-white matter junction, as well as deep-seated white matter, are more likely to be affected. White matter lesions occur more frequently than superior and grey matter lesions [10]. Cerebral sinus thrombosis can also occur [8]. The typical features of angiographic findings are the presence of segmental arterial constriction, which is often followed by post stenotic dilatation, creating a beading pattern. Occlusions can also be found on cerebral angiography based on the extent of the disease [11]. The most sensitive diagnostic criterion at this time is the presence of anti-VZV antibodies in the Cerebrospinal Fluid (CSF). The vascular biopsy and virological studies can be also used to detect HHV-3, VZV DNA, VZV antigen, and multinucleated giant cells within the walls of related blood vessels [12].

VZV vasculopathy should be suspected in patients with a history of recent VZV infection, who have neurological and thrombotic symptoms in addition to angiographic evidence of narrowing or dissecting vessels [2]. The treatment requires intravenous acyclovir therapy with or without steroid therapy. VZV vasculopathy is very rare and the diagnosis is commonly missed because the neurologic symptoms occur without dermatomal rash in case of enteric reactivation or develop days to months after the resolution of the rash; on average, 4.2 months after the rash resolves [11, 13]. In addition, other etiologies can also contribute to these similar neurological symptoms and imaging abnormalities, examples include hypertension, diabetes, or tobacco use. In this case report, we describe a patient with ongoing VZV reactivation in the enteric nervous system as well as the adrenal gland, complicated by multiple central and peripheral vasculopathies.

A 51-year-old female with a past medical history of essential hypertension and hypothyroidism presented to the emergency room with a 5-day history of abdominal pain, bilateral flank pain, increased weakness, restlessness, and extremity tremors. Eight weeks prior, she had a history of maculopapular rash on the left side of her neck, shoulder, and back, which was confirmed as varicella-zoster reactivation and was treated with acyclovir and steroids. Her Computed Tomography (CT) of the chest and abdomen revealed mild generalized esophageal wall thickening, mild hepatomegaly, and mild generalized thickening of the left adrenal gland in addition to a 1.9 × 1.9 cm nodule of the right adrenal gland (Figure 1). 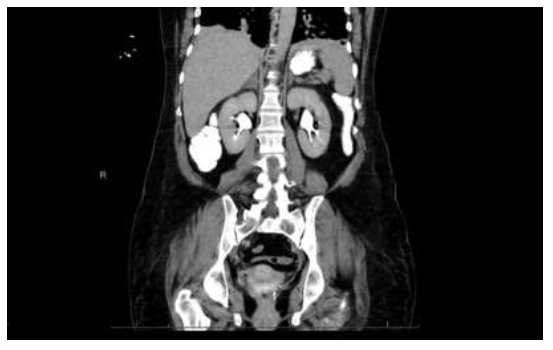 Figure 1: CT coronal view of abdomen and pelvis demonstrates a 1.9×1.9 cm nodule of the right adrenal gland. Mild generalized thickening of the left adrenal was noted.

On hospital day 3, she was intubated due to hemodynamic deterioration and acute hypoxic respiratory failure. A repeat chest CT revealed prominent endobronchial mucus plugging within the bilateral lower lobes, with left-sided ground-glass opacities. A PE was suspected due to the acute onset of hypoxemia and lower extremity Doppler Ultrasound findings of a non-occlusive 3 cm thrombus in the right common femoral vein. A CT Angiogram (CTA) was deferred due to acute kidney injury and the patient was started on heparin drip for treatment of DVT and suspected PE.

On hospital day 6, she developed acute encephalopathy, left upper and lower extremity weakness, and left homonymous hemianopia. CT head showed acute SAH in the high posterior right parietal lobe (Figure 2). CTA head revealed significant stenosis of the right distal cervical ICA with a focal area of near occlusion, in addition to occlusion of the proximal petrous segment of the right ICA. There was also a diffusely diminutive appearance of the arterial vasculature throughout, with dominant left Anterior Cerebral Artery (ACA) and diminutive right ACA. CTA neck showed an abrupt change in caliber of the right ICA, 1.5 cm distal to the bifurcation, with markedly severe narrowing of the majority portion of the extracranial right ICA throughout its course. 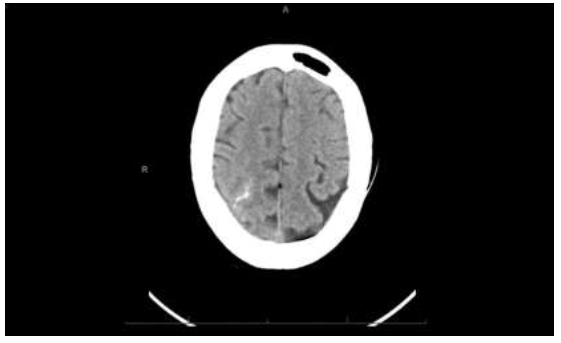 Figure 2: Non-contrast CT of the brain demonstrates an area of increased attenuation, a subarachnoid hemorrhage in the superior right parietal convexity. 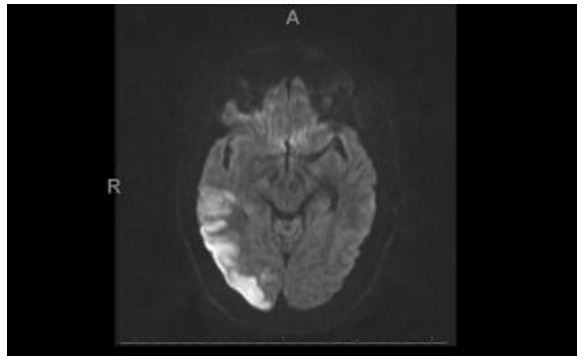 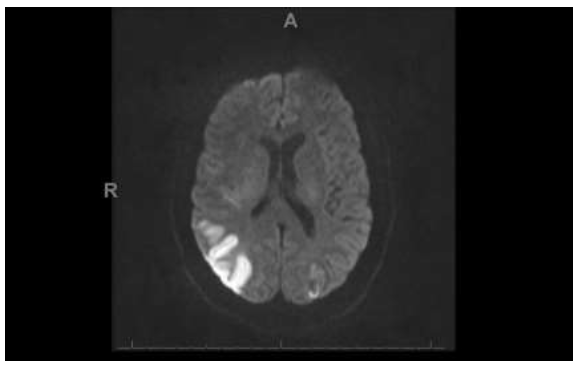 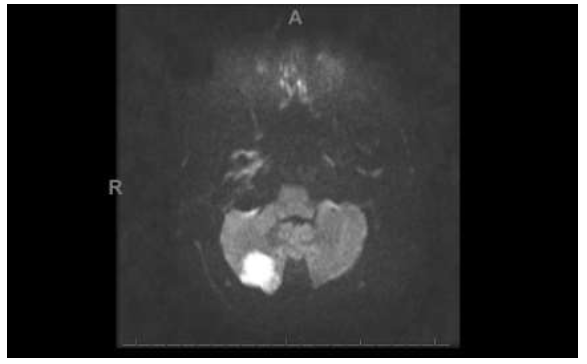 Figure 5: The Diffusion-Weighted imaging demonstrates a 1.5 cm area of restricted diffusion in the posterior aspect of the right cerebellar hemisphere consistent with acute infarction. 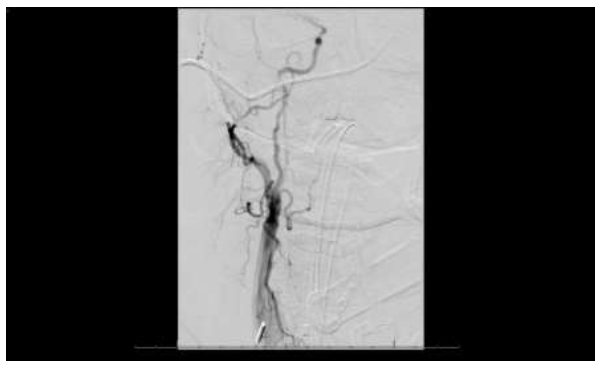 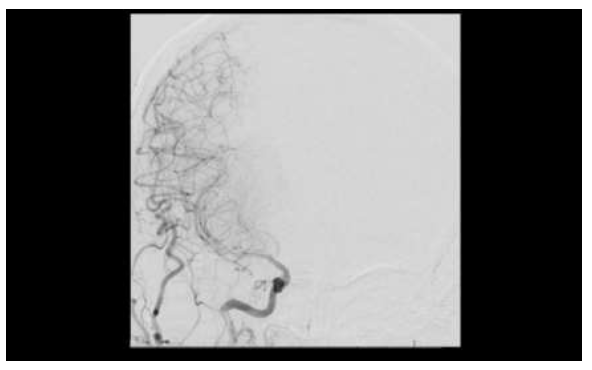 A lumbar puncture was performed, and the CSF studies showed White Blood Cell count (WBC) of 2 /mm3, Red Blood Cell count (RBC) of 7/mm3, protein 162 mg%, and glucose 64mg %. VZV Polymerase Chain Reaction (PCR) was negative, and both CSF VZV IgG and serum VZV IgG were positive. Heparin was discontinued due to SAH, and nimodipine was administered for vasospasm. Her neurologic symptoms improved significantly after 5 days of treatment and the patient was discharged to a post-acute care rehabilitation facility.

The manifestations of VZV vasculopathy can be atypical and diverse depending on the vascular territories affected. According to most case reports, VZV vasculopathy commonly affects large vessels, particularly cerebral arteries, as well as internal carotid arteries. Patients may present with ischemic/hemorrhage stroke, aneurysm, arterial dissection, venous sinus thrombosis, and peripheral thrombotic disease [14]. Concurrent involvement of both the arterial and venous vascular systems is extremely rare although identified in our patient. Brain imaging revealed multifocal ischemic stroke involving grey-white junctions, SAH, and right ICA dissection. The sudden onset of DVT and suspected PE suggest peripheral venous involvement, although a Peripherally Inserted Central Catheter (PICC) line might be a coexisting factor.

VZV is most commonly latent in sensory dorsal root ganglia; reactivation in this region can cause a typical dermatomal herpes zoster rash, which is commonly referred to as shingles rash. However, latent VZV is present not only in dorsal root ganglia but in the enteric nervous system and adrenal glands. Due to lack of cutaneous projections, enteric zoster does not manifest a dermatomal rash and instead will manifest as gastrointestinal symptoms, which makes diagnoses difficult [15, 16]. The adrenal gland is another locus of latent VZV in that the adrenal gland also contains medullary chromaffin cells of neural crest origin. Both human autopsy and animal studies have shown the presence of VZV DNA in the small intestine and adrenal glands [17-19]. About one-third of VZV vasculopathies can occur without a previous dermatomal rash [9, 11, 20], which may be related to enteric or adrenal gland zoster reactivation.

In our case, we initially suspected that the VZV vasculopathy might be related to the previous history of multi-dermatomal zoster reactivation two months ago. However, multiple GI tract symptoms and abnormalities on imaging studies lead to suspicion for enteric and adrenal gland involvement. The initial abdominal symptoms, in addition to chest and abdominal CT findings of mild esophagus wall thickness and mild hepatomegaly, were most likely signs of enteric zoster reactivation. The initial electrolyte abnormalities of severe hyponatremia and hypokalemia requiring hypertonic saline as well as sympathetic symptoms, such as tremors and restlessness were most likely due to VZV reactivation in the adrenal glands. This was supported by the CT abdomen, which showed mild generalized thickening of the left adrenal gland in addition to a 1.9x1.9 cm nodule of the right adrenal gland. Although human autopsy and animal studies have proven VZV latency in the human enteric nervous system and adrenal glands, no in vivo cases have been reported. We believe this case is the first clinical report of enteric and adrenal gland zoster reactivation with concurrent VZV vasculopathy.

From a neurologic standpoint, unifocal or multifocal lesions in both grey and white matter, particularly at grey-white matter junctions, typical angiographic features, and the presence of anti-VZV IgG antibody in the CSF and serum would further support the diagnosis of VZV vasculopathy. Based on a review of the literature, there are no clear guidelines for the treatment of this condition. Prompt recognition and antiviral medication can significantly improve neurological symptoms [6, 7, 21]. A retrospective study has shown that a low-dose oral acyclovir maintenance therapy is associated with clinical improvement and remission. Persistent VZV IgG in CSF could be associated with the risk of recurrence [21]. It is worth mentioning that we should be cautious of anticoagulant use due to potential hemorrhagic stroke, which unfortunately occurred in our patient before her final diagnosis was confirmed.