2Department of Orthopedics and Rehabilitation, University of Wisconsin School of Medicine and Public Health, WI, USA

Background: Cervical dystonia, the most common form of dystonia, is a painful and disabling movement disorder primarily of idiopathic etiology. While there is no cure, several modalities have been utilized for symptom management including medications, injections, and deep brain stimulation.

Case Report: The patient is a now 75-year-old female with a history of painful cervical dystonia. Despite several other treatment modalities including physical therapy, oral medications, and onabotulinum toxin injections, her symptoms continued to worsen. She underwent serial low volume dextrose intra-nasal irrigation and experienced decreased pain and improved cervical range of motion. She performed dextrose nasal irrigation at regular intervals with sustained improvement in her range of motion until treatment was discontinued.

Dystonia is a painful, disabling movement disorder characterized by muscle contractions. Cervical dystonia (also called spasmodic torticollis) is the most common form. U.S. prevalence is approximately 0.39% [1]. The etiology is primarily idiopathic; the work-up includes laboratory testing, brain imaging, and potentially genetic testing. There is no cure; therapy targets symptom redu-ction. The sphenopalatine ganglion (SPG, pterygopalatine or Meckel’s ganglion) lies in the pterygopalatine fossa and is associated with pain perception [2]. Studies have reported effective use of SPG blocks delivered topically or by injection to treat head and neck pain conditions [3].

Dextrose (D-glucose), a sugar solution frequently used to treat hypoglycemia, is also used as a therapeutic agent for chronic musculoskeletal pain in three emerging injection therapies: prolotherapy, perineural injection therapy and hydrodissection. Each of these is supported by positive findings in moderate or high quality randomized controlled trials (RCTs [4, 5]). Glucose has been used to treat pain in newborn patients undergoing circumcision [6]. Xylitol, a related sugar, is safe and effective when used as a nasal irrigant for sinus symptoms [7]. Anecdotally, clinicians who treat chronic pain and are familiar with these therapies have used low-concentration dextrose delivered nasally for head and neck pain conditions and demonstrated them in conference settings [8] but the technique has not been described in peer-reviewed literature. This case report documents the use of 5% dextrose nasal irrigation (D-NI) to treat adult-onset cervical dystonia refractory to non-surgical care.

This case description is derived from chart review, clinical encounters and telephone interviews between June 2017 and December 2018 at the University of Wisconsin-Madison Departments of Neurology and Family Medicine. The patient gave written informed consent for the nasal irrigation procedures described, and for publication of clinical information. She was diagnosed at our movement disorders clinic at age 48 (1994) with painful left rotational cervical dystonia with associated neck and shoulder pain. From diagnosis, symptoms progressed over four years in spite of ongoing care, then worsened further after a sledding accident at age 52. A physical therapist noted “posterior hypertrophy of the trapezius bilaterally and marked hypertrophy of the right sternocleidomastoid with… mild head tremor.” Initial studies (genetic testing, head MRI and neck MRA) did not reveal a cause. Neurologic exam was normal for cranial nerve testing, strength, and reflexes. The patient tried numerous therapies over several years. Oral medications included cyclobenzaprine, benzodiazepines, and baclofen. None were effective. Other therapies included Botulinum toxin type A and B injections, chiropractic and osteopathic manipulation, acupuncture, hypnosis, biofeedback, massage, and cognitive behavioral therapies, but each provided little relief.

Her symptoms remained relatively stable for several years. Benzodiazepines were discontinued in 2015 due to decreased effectiveness. A prescription of 5 mg oxycodone/325 mg acetaminophen after a dental procedure improved sleep initiation and she was started on 5 mg oxycodone nightly as needed. She continued to use sensory maneuvers to help mediate her torticollis but she reported nightly poor sleep and daily difficult activities of daily living (ADL) performance due to pain. The patient was seen in our family medicine clinic in June 2017 at age 72 for routine primary care; she had persistent left spasmodic torticollis with 7/10 neck and shoulder pain. Overall neck disability as assessed by the validated Neck Disability Index (NDI), [9] was 62/100, indicating moderate neck pain and disability. Cervical range of motion testing one-month prior revealed baseline head position at 35 degrees of left rotation, right rotation short of midline, and 70 degrees active left rotation. She compensated with positional maneuvers to relax the torticollis, for example placing her right hand on her right cheek and focusing her eyes to the right. The lead author was aware of D-NI for head and neck pain and provided it after obtaining written informed consent (Figure 1). She reported improvement in neck pain to 5/10 immediately after the procedure. 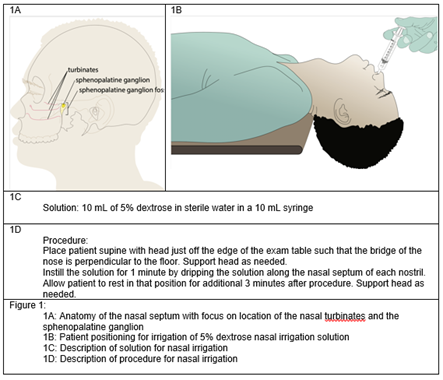 Clinic follow-up 3 days later revealed decreased subjective neck stiffness and reduced neck pain to 2/10. D-NI was repeated; the patient noted 3 consecutive nights sleep with minimal sleep latency for the first time in years, decreased neck stiffness, and elimination of her neck pain. Pain and stiffness with mild dystonia returned on day 7 and she presented the following day to clinic for repeat D-NI and again experienced 3 days of symptomatic relief. In clinic 1 week later, she reported improved pain (2/10), improved neck mobility, and improvement in overall disability by 50%. Her NDI score was 34/100. The lead author taught the patient’s spouse to administer D-NI and provided a prescription for 5% dextrose in sterile water, syringes, and 18 G needles to draw up the dextrose. The patient’s husband performed the nasal irrigation every 2-3 days at home over the next 2 months. The patient reported 50-100% decrease in pain and stiffness, and improved ability to perform ADLs and hobbies such as knitting, for duration of 24-48 hours following each irrigation. In-person evaluation at three months demonstrated baseline head position at 10 degrees of left rotation with ability to hold head in midline for 20 seconds and rotate head to the right to 20 degrees past midline, with continued 70 degrees of active left rotation with symmetric shoulder heights. She reported 3-4 irrigations per week as optimal; two times per week resulted in limited effectiveness and return of pain. She continued regular D-NI with consistent positive effect through December 2017, at which time her NDI score was 30/100.

Continuity of care then decreased. The patient spent several months abroad and was not able to continue with D-NI. When she returned to the U.S. dextrose availability was limited due to a national shortage. Phone follow-up in the summer of 2018 revealed intermittent use of D-NI at once per week or less. Barriers to use included dextrose availability and the challenge of routinization. In August of 2018, after several months of not using D-NI for several months, her NDI score was 52/100. She restarted D-NI a month later at 1-3 times per week, and reported a NDI score of 44/100. She was then lost to follow-up.

This case report describes the partial treatment of refractory cervical dystonia with D-NI. After 27 years of symptoms, the patient experienced reduced neck pain and improved function after D-NI when used at least 3 times per week. While case report data precludes assignation of causality, the duration and severity of her symptoms and her rapid symptomatic response after treatment suggests the procedure aided in her improvement. This is the first report of topical dextrose, a commonly used monosaccharide, as a therapeutic modality for cervical dystonia. D-NI has been used for at least one other pain condition, optic neuritis [10]. In that case, the protocol was similar but for the addition of sodium bicarbonate as a buffer, which balances the pH, reducing potential stinging sensation, and is used in other dextrose-related pain therapy [11]. Sodium bicar-bonate was not used in the current case due to a national shortage in the US at the time of therapy. Pain reduction after dextrose therapy is consistent with three dextrose-containing injection therapies, each supported by rando-mized clinical trial data. Prolotherapy uses injections at entheses and intra-articular spaces; and perineural injection therapy and hydrodissection use dextrose delivered superficially and to nerve sheaths respectively [5]. Sucrose, a disaccharide controls pain control in neonates [6].

The relationship between pain and the SPG is not well understood. It is the largest, most superior ganglion of sensory, sympathetic and parasympathetic nervous system and the only ganglion having access to the outside enviro-nment through the nasal mucosa. The SPG gives rise to numerous neural structures, and lies near several structures important in in pain perception. Early research [12] demonstrated the SPG had a diffuse effect on the nervous system leading to spasm in the trunk and extremities and that chemically blocking the SPG could reduce pain and successfully treat low back pain, sciatica, and angina [13, 14]. Contemporary researchers have hypothesized its involvement in numerous pain conditions, most strongly for cluster headaches though also for trigeminal neuralgia, migraines, and endoscopic sinus surgery post-operative pain [15]. SPG blockade has been reported to relieve pain from the head, face, neck and upper and lower back. Such a blockade could function by modulating pain through the sympathetic trunk and spinal nerve roots via the deep petrosal nerve ultimately reaching downstream targets [15]. The mechanism of how low concentration dextrose may be involved in analgesia at the cellular level is not known. Clinical studies suggest a biological pain-specific role for dextrose that may include direct or indirect antagonist effect on TRPV1 receptor activation or other sensorineural structures, or that dextrose may provide an energy source for ischemic C-fibers [4]. Basic science studies are needed to further elucidate the details of dextrose at the tissue and cellular levels.

Written informed consent was obtained from the patient for publication of this case report and any accompanying images.