There has been a recognizable surge in cosmetic surgery in recent years, partly influenced by social media, and the easy accessibility to such medical procedures. As with all types of surgery, the risks of complications are real, and in this specific setting, they tend to occur in a younger age group. Here, we discuss a rare complication and subsequent presentation of tension pneumocephalus, following an episode of cardiac arrest in a 58 year old female, during elective cosmetic-facial surgery. Typically, pneumocephalus develops when there are skull or facial bone fractures, and presents characteristically with leakage of cerebrospinal fluid from the ears and/or nose. The absence of the typical clinical signs and the lack of a clinical history or radiologically evidence of skull or facial bone fractions, may result in a delayed diagnosis, permanent brain injury and death. Awareness of such an unusual complication is therefore crucial when considering any surgery to the head and face (including cosmetic surgery), or following prolonged resuscitative efforts, which may well develop days after the inciting event.

Pneumocephalus was first described by Lekat in 1741, with Ectors et al coining the term tension pneumocephallus in 1962, which describes a process where there is entrapment of air/gas in the cranial cavity and ventricles, via a valve-like mechanism created by skull or facial trauma/surgery. The air/gas enters the cranial cavity but cannot then escape, resulting in entrapped air/gas in and around the brain tissue, with subsequent brain hypoxia. The incidence of pneumocephalus is variable, ranging from 1% in cases of to 82%, occurring typically after facial or skull disruption/injury, for example following cranial/otorlaryngeal surgery, traumatic head injuries, ear infections, or erosion of the skull base by a tumor [1]. While the prognosis of a tension pneumocephalus can be good, this is dependent on an early diagnosis. Characteristic clinical signs include bone fractures and leakage of cerebral spinal fluid (CSF) from the nose or ear canal, followed by radiological confirmation of a brain computed tomography (CT). Here we discuss a rare presentation of tension pneumocephalus in the absence of clinically apparent skull or facial bone manipulation/fractions, following cardiac arrest of the patient during elective cosmetic facial surgery (face-lift).

A previously well 58 years old female underwent elective cosmetic facial surgery, which did not include the manipulation of any facial bones during surgery. Intravenous propofol with subcutaneous lidocaine injection was used for sedation and analgesia. One hour into the surgery the patient went into sudden cardiac arrest with pulseless electrical activity. This was followed by rigorous Cardiopulmonary resuscitation with face mask ventilation and cardio-pulmonary massage, which continued for approximately two hours, after which signs of spontaneous circulation were detected. The patient was subsequently transferred to our emergency department (ED) and intubated. Initial assessment at ED showed blood pressure of 110/76 mmHg, temperature 31.6 degrees Celsius, heart rate of 86 beats per minute, respiratory rate of 20 breaths per minutes with Glasgow Coma Score (GCS) of 3, bilateral pupil dilatation (4/4mm) with negative light reflex. Further clinical findings included oozing from the bilateral facial surgical wounds. However, definite evidence of leakage of cerebrospinal fluid from the ears or nose was not evident. On Blood assay there was hyperglycaemia (528mg/dl), leukocytosis (19690/ul), acute renal failure (Creatinine/Bun:1.4/17.8 mg/dL), hypernatremia (151mmol/L), hypokalemia (2.36mmol/L) and mildly elevated cardiac enzyme (Troponin I: 0.523 ng/L). Arterial blood gas showed CO2 wash out with severe metabolic acidosis. An electrocardiogram revealed evidence of atrial fibrillation with ST-segment depression at the inferior wall and T wave inversion at the lateral wall. Cardiac echography suggested global hypokinesia with poor ejection fraction, while, the angiogram showed complete patency of the coronary arteries. On CT scan of the head there was evidence of diffused brain swelling and while there was fluid in the nasal sinuses, this favoured a diagnosis of mild chronic sinusitis (Figure 1), while there were no associated fractures of cranial or facial bones. Pulmonary emboli and an aortic aneurysm were excluded, and a nidus of significant infection was not identified. The patient was transferred to the intensive care unit (ICU) where inotropic and vasopressor agents were continued for three days, and subsequently tapered off. The patient remained in a persistent deep coma, during which time she developed massive diuresis, intermittent arrhythmia and sweating. As a result electroencephalography was conducted, which showed diffuse electric silence, indicating severe cortical dysfunction and confirming the clinical suspicion of brain failure, seven days after the patient was admitted. A follow-up brain CT revealed persistent severe brain swelling and gross tension pneumocephalus (Figure 2). Brain CT reviewed, independently by two radiologists, confirmed the presence of pneumocephalus without any evidence of associated bone fractures. The subsequent detailed laryngoscopic examination failed to identify any lesions, while the nasogastric tube was correctly placed. Supportive care followed and continued until the patient passed away a few weeks later. 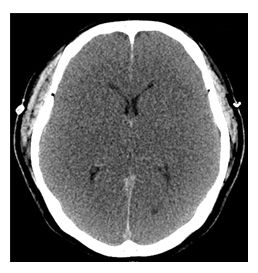 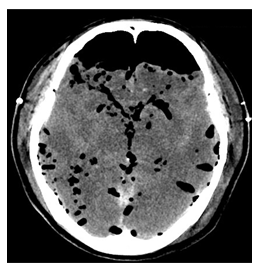 Figure 2: Diffuse intracranial collections of air in the subdural, subarachnoid and ventricular systems with effacement of and ill-defined grey-white matter interface, in keeping with pneumocephalus.

Two mechanisms have been described in the development of sterile tension pneumocephalus, the first of which is based on the “ball valve” [2], where air enters the intracranial cavity in a unidirectional manner and the second which is based on the "inverted-soda-bottle effect" theory [3] which develops as a result of low intracranial pressure secondary to prominent leakage of CSF from the cranial cavity. In addition, the accumulation of air can be acute (< 72h) or delayed (≥72h) [4]. A small amount of intracranial air can complicate 3,9-9.7% of head injuries cases, however, these are generally regarded as clinically benign and asymptomatic [1], and may appear after supratentorial craniotomy [5]. Uncommonly, this may also occur as a complication of facemask ventilation, mouth to mouth breathing during resuscitation or continuous positive pressure ventilation, due to the large positive air pressure induced within the upper airway, which may rarely result in large amounts of air leaking into the cranium [6]. Clinically, patients with tension pneumocephalus may be asymptomatic; present with non-specific symptoms such as headaches, agitation, altered levels of consciousness; or have specific neurological symptoms such as generalized seizures, changes in the pupils and limb weakness. If left untreated, cardiac arrest may subsequently occur. Clinical suspicion is raised when the clinical context and history are suggestive of such an event, when there is evidence of CSF leakage from the external ear canal and/or nose is detected and if there are fractures of the craniofacial bones, while it is confirmed by plain brain CT without contrast, which is highly sensitive and specific for making the diagnosis. Here we describe a rare case of delayed tension pneumocephalus, as evident by the absence of the typical “Mount Fuji sign” [7] on initial brain CT, however, subsequently manifesting as diffuse intracranial collections of air observed in the subdural, subarachnoid and ventricular systems after 72 Hours. While tension pneumocephalus has been described following facial surgery [8] and in particular after a facelift, this was associated with the use of microscrews. The exact pathophysiological mechanism in our case, however, remains uncertain, despite all efforts to identify the cause, as evident by the extensive laryngoscopic studies carried out of the upper airway and sinuses. Although no obvious site of air leakage could be identified, it is still possible that minor fractures or mucosal disruption to the nasal sinuses occurred during the cosmetic surgery itself, during initial resuscitative efforts with the face mask, or a combination of both, compounded by subsequent mechanical ventilation in ICU, resulting in intracranial entrant of the air, via a ball-valve effect. As timely treatment of tension pneumocephalus may help improve brain function and subsequent survival, our case serves as a remind to clinicians of this possible complication of post-facial cosmetic surgery or in the setting of prolonged resuscitation, especially in the absence of initial typical clinical signs or diagnostic radiological findings. There is no conflict of interest regarding this article.