A Case of Hemophagocytic Lymphohistiocytosis Induced by Regorafenib

Hemophagocytic lymphohistiocytosis (HLH) is a rare and severe condition of immune dysregulation characterized by severe organ damage induced by a hyperinflammatory response and uncontrolled T-cell and macrophage activation. Secondary HLH, also known as macrophage activation syndrome, commonly presents in adulthood and characterized by acquired immune dysfunction in response to infections, malignancies, or autoinflammatory/autoimmune disorders. Secondary HLH induced by regorafenib has not been yet described. Here we report a case of HLH induced by regorafenib, confirmed by clinical, laboratory and histopathological findings, with typical results on bone marrow aspiration.

Hemophagocytic lymphohistiocytosis (HLH) is a rare and severe condition of immune dysregulation characterized by severe organ damage induced by a hyperinflammatory response and uncontrolled T-cell and macrophage activation. HLH can be caused by genetic mutations affecting cytotoxic functions (familial HLH) or be secondary to infectious, rheumatologic, malignant, or metabolic conditions (acquired HLH) [1, 2]. In rare cases, HLH has been described to be induced by drugs, for example following the use of lamotrigine [3]. In this case report, we describe a HLH induced by Regorafenib. Regorafenib (Stivarga®) is an oral multikinase inhibitor with a distinct and wide-ranging profile of tyrosine kinase inhibition involved in angiogenesis (VEGFR1-3, TIE-2), oncogenesis (c-KIT, RET, RAF1, BRAF) and maintenance of the tumor microenvironment (PDGFβ-FGFR-1) [4]. It has been shown to improve overall or progression-free survival in patients with colorectal cancer and gastrointestinal stromal tumors, respectively [5, 6]. Regorafenib is also evaluated in clinical trials, as monotherapy or combination therapy (with chemotherapy or immune checkpoint inhibitors), for advanced solid tumors or myeloid malignancies. 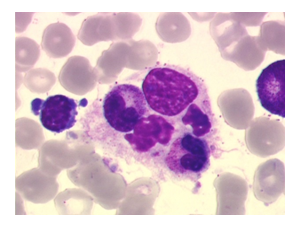 As etiological review, serological tests were negative for cytomegalovirus (CMV), Epstein-Barr virus (EBV), human immunodeficiency virus (HIV), B and C-hepatitis virus, human herpes virus 6 and 8, and Herpes simplex virus-1. Blood culture and urine analysis were also negative. Abdominal ultrasound and chest X-rays were normal. At the same time a CT scan was performed in order to exclude a disease progression. Because of these clinical and biological arguments, we concluded to the diagnosis of a hemophagocytic lymphohistiocytosis syndrome.

Regorafenib was stopped and management consisted of intravenous methylprednisolone (1.5 mg/kg) leading to a rapid regression of the rash, fever and the cytopenia once twenty-four hours. Prednisone was continued orally with a rapid decrease and was stopped after 15 days. All clinical and biological symptoms were resolved when the prednisone was stopped. Regorafenib was definitively stopped.

HLH, is a hyperinflammatory condition caused by a highly stimulated, but ineffective immune response. Primary HLH usually presents in childhood, and is associated with mutations in genes such as MUNC 13-4, perforin 1, Syntaxin-122, affecting lymphocyte cytotoxicity and immune regulation. Secondary HLH, also known as macrophage activation syndrome, commonly presents in adulthood and characterized by acquired immune dysfunction in response to infections, malignancies, or autoinflammatory/autoimmune disorders. EBV, CMV and HIV are the most frequent infections involved in HLH, while lymphoma is the most commonly associated malignancy. The clinical presentation of HLH could be non-specific. It is generally acute, with a high-grade fever, splenomegaly, lymphadenopathies, hepatomegaly. Among the laboratory abnormalities, serum ferritin level is commonly elevated (≥500 µg/L), associated with cytopenia, bone marrow hemophagocytosis and hypertriglyceridemia. Other common signs consistent with the diagnosis include edema, rash, hyponatremia, hypoalbuminemia, elevated LDH. The diagnosis of HLH is based on clinical, laboratory and histopathological findings. Diagnosis criteria were revised by the Histiocyte Society in 2004. A major obstacle in diagnosing is the overlap of symptoms with a variety of other illness; it is especially challenging to differentiate between sepsis and HLH [7, 8].

There are no specific HLH treatment guidelines based on randomized trials. The American Society of Hematology had recently published recommendations for the management of hemophagocytic lymphohistiocytosis in adults [9]. Based on HLH-94 and 2004 protocols, high-dose glucocorticoids, etoposide, methotrexate and cyclosporine are most commonly recommended treatments. In addition to supportive therapy, specific treatment is necessary. Prompt recognition is paramount, but often challenging and prognosis remains poor. Less than 50% of adults with HLH received HLH-directed therapy because of lack of awareness and missed diagnosis of this condition. High morbidity and mortality due to HLH is partially attributed to delay in diagnosis. The rarity of the syndrome, non-specific clinical and biological symptoms are among the contributing factors. However, early diagnosis and treatment are critical to avoid progressive tissue damage, organ failure and possibly death.

A variety of malignancies could be associated with HLH in adults, especially hematologic neoplasms. HLH associated with solid tumor remains rare. However, disease progression must always be excluded [9]. HLH induced by drugs are described. We report here the first case of HLH induced by regorafenib. Secondary HLH has been reported after treatment with chimeric antigen receptor (CAR) T-cells due to its immunomodulatory effects, and there are increasing reports of treatment-induced HLH in patients treated with CTLA4- and PD1/PDL1-directed checkpoint antibodies. Treatment interruption or corticosteroids have been used with meaningful responses [10].

This case suggests that HLH should be a differential diagnosis for patients treated with regorafenib presenting with fever, cytopenia and any other signs of a hyperinflammatory status, to avoid missed or delayed diagnosis.