During the course of treatment for rheumatoid arthritis, anti-DNA antibody was detected, and systemic lupus erythematosus was diagnosed, who was subsequently treated with abatacept—and remission was achieved. Rebound of elevated anti-DNA antibody and urinary abnormalities were noted with MPO-ANCA positivity. Renal biopsy revealed lupus nephritis; followed by the development of rapidly progressive glomerulonephritis, which required apheresis (double filtration plasmapheresis) therapy, although no response was achieved. However, plasma exchange therapy was highly effective. These results suggest that MPO-ANCA-positive lupus nephritis can become severe and require intensive treatment in accordance with the treatment for severe vasculitis.

Systemic lupus erythematosus (SLE) is an autoimmune disease that can cause systemic damage to organs such as the lungs, kidneys, and skin. The pathological conditions and clinical presentations vary in patients, and therefore, close management by a rheumatologist is indispensable. One of the most serious complications associated with lupus nephritis is its progression to end-stage renal failure. Under the ISN/RPS 2003 revised classification system [1], lupus nephritis is classified as types ranging from type I to type VI and effective treatment for lupus nephritis is clearly classified by "2012 ACR recommendation" [2]. Although survival rates and end-stage renal failure rates have improved, cases of treatment resistance continue to be found.

The patient was a 68-year-old female who presented with bilateral hand joint pain, onset of which was in the autumn of 2009. Although negative for anti-CCP antibody and rheumatoid factor, an increase in MMP3 levels with time was noted, and after she was diagnosed with rheumatoid arthritis in November 2009, treatment with 4 mg/w methotrexate (MTX) and 4 mg/d prednisolone (PSL) was initiated. Subsequently, MTX was increased to 6 mg/w, mizoribine (MZB) was included in her treatment regimen, and symptoms temporarily improved. Exacerbation of joint pain was noted from May 2011, requiring the patient to be admitted for further examination. Blood sample collected at the time of admission tested positive for antinuclear antibody, anti-DNA antibody, and anti-cardiolipin antibody and showed low count of white blood cells. The patient with concurrent arthritis was diagnosed with SLE based on the laboratory findings [3]. Treatment with MTX and MZB was discontinued, and the patient was started on 3 mg tacrolimus (TAC) with no improvement, and abatacept was introduced for arthritic symptoms. Remission was immediately achieved, and the patient was treated with abatacept alone until December 2016 when abatacept was discontinued and drug-free remission was achieved.

Change to positive anti-DNA antibody was recognized from September 2018, and in December 2018 revealed an increase in anti-DNA antibody from to 72 IU/mL. Urinalysis revealed 2 g proteinuria and macroscopic hematuria. The patient was admitted for the second time for further examination and treatment because SLE hyperactivity and the onset of lupus nephritis were suspected.

Renal biopsy was performed on hospital day 2 with the aim of scheduling treatment based on biopsy results. However, as of hospital day 2, serum Creatinine (Cre) increased from 1.32 to 1.85 mg/dL, treatment with PSL 50 mg (after renal biopsy on hospital day 2) was initiated at the rate of 1 mg/kg. Because serum Cre levels continued to rise (Cre 3.27 mg/dL), steroid semi-pulse therapy (mPSL 500 mg) was administered for 3 days from hospital day 6. Renal biopsy confirmed focal lupus nephritis (ISN/RPS Class III), which is considered to be a pathological condition of rapidly progressive glomerulonephritis (RPGN) based on lupus nephritis. Double filtration plasmapheresis (DFPP) and intravenous cyclophosphamide (CPA) pulse therapy were introduced on hospital day 9 (Cre 4.57 mg/dL). Despite the lack of increase in serum Cre, renal function did not improve. Blood sampling at admission had revealed positive results for MPO-anti-neutrophil cytoplasmic antibodies (ANCA) 139 U/mL and in conjunction with findings of peritubular capillary vasculitis by renal biopsy; the patient was treated for microscopic polyangiitis (MPA) with high disease activity. On hospital day 17, the reduction in blood platelet count to 55,000/μL and the introduction of rituximab for the possibility of cytopenia were correlated to a possible accompanying viral infection from the elapsed avoids; this led to the discontinuation of DFPP from hospital day 19 in favor of plasma exchange therapy (PE). Renal function gradually improved after the introduction of PE, which was administered intermittently for five times (Figure 1) and terminated on hospital day 35 when Cre reduced to 2.11 mg/dL. Hydroxychloroquine (HCQ) (200 mg/d) was initiated from hospital day 45, and 500 mg/d of mycophenolate mofetil was introduced from hospital day 56. The steroid dose was progressively reduced from hospital day 30, and the patient was discharged on hospital day 59 with favorable prognosis.

After the discharge, she continued receiving outpatient treatment, and low disease activity has been maintained without any deterioration in renal function.

A total of 10-15 glomeruli were collected. The mesangial matrix was partially visible, and imaging indicated the proliferation of mesangial cells in seven glomeruli. Additionally, segmental endocapillary proliferation was observed in three to four of the seven glomeruli that showed proliferative changes-three lesions appeared to be thrombus; glomerular fibrinoid thrombi were found in two glomeruli; and two glomeruli showed a cellular crescent. The paramesangium showed unclear periodic acid-methenamine-silver (PAM) staining, which was diffuse, global, or segmental, and did not clearly show deposition.

Mild and diffuse inflammatory cell infiltration was observed in the interstitium, with minor fibrosis in some margins. Small scattered mild atrophies were observed in some tubules with mild columns, and red blood cell fillings were observed in many partial tubular lumens. Moreover, tubulitis, proximal tubule vacuolization and possibly hemosiderin pigment were observed in some tubules; however, calcification was not observed. The vasculature showed mild–moderate wall thickening. Because partial inflammatory cell infiltration was observed in the peritubular capillaries, peritubular capillary vasculitis could not be ruled out. Immunohistochemical test did not reveal clear positive findings, including C1q, but electron microscopy showed a clear electron dense deposit in the mesangial region.

Based on the above findings, SLE was clinically diagnosed in the patient; active lesions comprised <50% of all observed glomeruli and corresponded to focal lupus nephritis [ISN/RPS Class III (A/C)] (Figure 2). 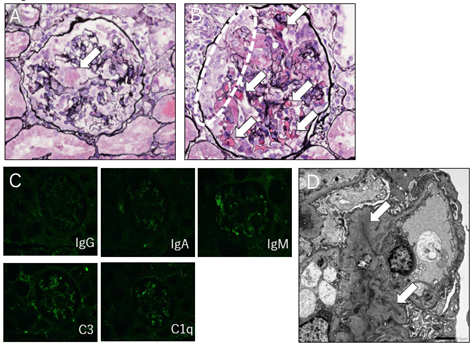 Although the patient was diagnosed with focal lupus nephritis [ISN/RPS Class III (A/C)] by renal biopsy, several findings-including slight deposition of fluorescent antibodies, MPO-ANCA-positivity, peritubular capillary vasculitis, and the fact that despite a rapid clinical course, there was no serological reduction in complement titer were not typical of lupus nephritis. Among secondary diseases that cause RPGN, MPA and granulomatosis with polyangiitis (GPA) have the "pauci-immune type," which pathologically shows no deposition of immunoglobulins or immune complexes, but in contrast, SLE generally exhibits an "immune complex type," in which extensive deposition of immunoglobulins and immune complexes is visible [4]. However, in the present case, deposition of immunoglobulins and immune complexes was weak for lupus nephritis, but did not fit the pauci-immune type, wherein fluorescent antibody is not deposited. One possible cause of such atypical findings may be the onset of high titer MPO-ANCA, despite it being a case of SLE.

Cases of MPO-ANCA-positive treatment-refractory lupus nephritis have been previously reported. Morimoto et al. reported that tacrolimus is effective against strongly positive MPO-ANCA treatment-refractory lupus nephritis [5, 6]. However, there are no reports of remission after changing the apheresis procedure from DFPP to PE as in the present case. Although DFPP is generally regarded as effective for the treatment of SLE, no clear efficacy was noted in the present case. In the present case, it is plausible that sufficient disease control could not be achieved only by removing anti-DNA antibodies and immune complexes, which is normally effective with DFPP. Considering the process of rapid improvement by switching apheresis to PE, it can be surmised that in the present case, removal of multiple inflammatory cytokines that pose a problem in highly active MPA, which are usually complicated with alveolar hemorrhage, and SLE associated with fatal pathologies, such as thrombotic microangiopathy and hemophagocytic syndrome, was critical for disease control. Additionally, rituximab, which is used for severe vasculitis, may be effective for the same reason, although it was not used in the present case because of cytomegalovirus infection.

Although MPO-ANCA is a representative disease marker for MPA, it is often detected in autoimmune diseases other than ANCA-associated vasculitis (AAV), and its significance and pathogenicity are unknown. The roles of ANCA in AAV include mobilization of various cytokines and cell adhesion factors on vascular endothelial cells, adhesion of neutrophils to endothelial cells and injury to cells by NETs release, and enhancement of C5a activity through alternative pathways [7]. The ANCA-positive rate in patients with SLE varies depending on the measurement method and is considered to be 20% by immunofluorescence or 9.3% by enzyme-linked immunosorbent assay commonly used in clinical practice [8-10]. While ANCA is associated with proliferative nephritis, it has also been associated with severity of the condition, such as in patients with ANCA-positive lupus nephritis [11]. However, as described above, manifestation of vascular inflammation and increase in severity do not necessarily occur in all ANCA-positive patients, and not all ANCA are pathogenic. Validated reports using epitope mapping have shown that only ANCA reactive with specific epitopes are considered pathogenic; however, uncertainties remain [12].

The clinical and pathological findings in the present case suggest that some cases of MPO-ANCA-positive lupus nephritis can become severe and require multidisciplinary?treatment in accordance with the treatment for severe vasculitis. While the type determination by kidney biopsy is important for initiating appropriate treatment for lupus nephritis, it may also be significant to measure MPO-ANCA.