A 59 year old man with a history of non-ischemic cardiomyopathy (NICM), severely depressed left ventricular systolic function (LVSF) and New York Heart Association (NYHA) class III heart failure symptoms presented with palpitations and chest discomfort. He had a biventricular (BiV) ICD implanted 3 years previously (St. Jude Medical, Unify© CRT-D). Pacing had been set to DDD mode with a maximum tracking rate of 125 beats-per-minute (bpm). The initial 12-lead electrocardiogram showed a regular, wide-complex tachycardia (WCT) with a left bundle branch block (LBBB) type pattern at a rate of 139 beats-per-minute (Figure 1). Interrogation of the device revealed ongoing tachycardia with a cycle length of 400 msec (Figure 2). Pacing maneuvers to diagnose the tachycardia mechanism were performed through the BiV ICD (Figures 3 and 4). What was the tachycardia mechanism?. 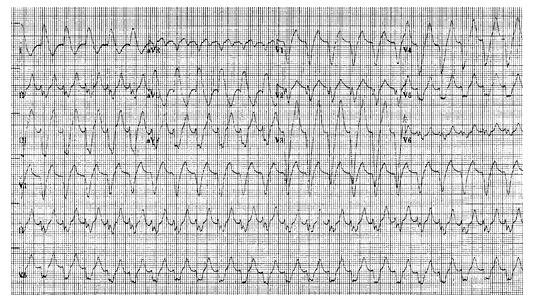 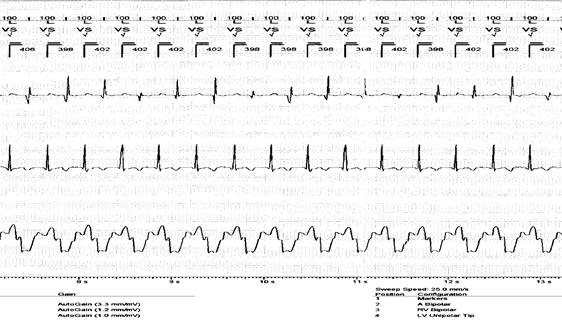 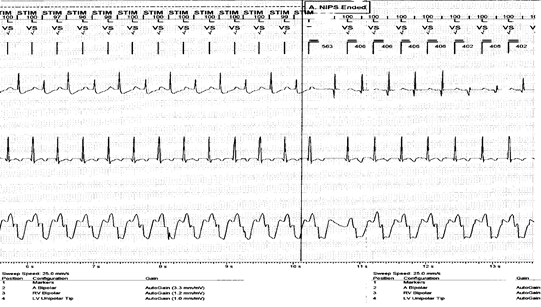 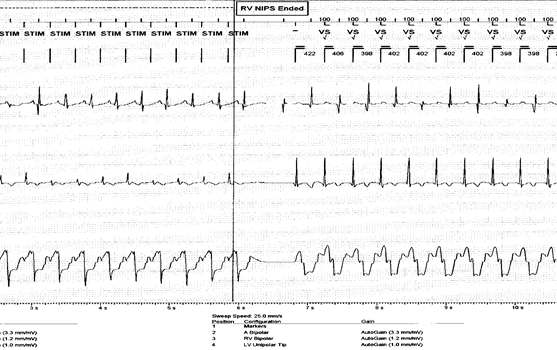 Figure 4: Entertainment via non-invasive programmed stimulation (NIPS) from the ventricle. Note the Vp-As-As-Vs response, confirming the diagnosis of atrial tachycardia (AT).

The differential diagnosis for the WCT included ventricular tachycardia (VT), supraventricular tachycardia (SVT) with aberrancy, pre-excited tachycardia, and pacemaker-mediated tachycardia (which was quickly excluded by the fact that rate of the WCT rate was faster than the programmed upper tracking rate). Several electrocardiographic features were suggestive of VT including a notched down-stroke of the S wave in lead V2 [1], pre-cordial concordance [2], and RS interval >100 msec in lead V6 [3] (Figure 1). The initial device interrogation revealed a tachycardia with a 1:1 A:V relationship (Figure 2). Since the diagnosis was initially considered most likely to be VT, atrial entrainment to confirm the diagnosis was first performed via non-invasive programmed stimulation (NIPS) which elicited a Ap-Vs-As, thus excluding the diagnosis of VT for which an Ap-Vs-Vs-As response would be expected [4] (Figure 3). Because of this, a diagnosis of SVT was made leaving 3 remaining possibilities, all of which would result in an Ap-Vs-As response to atrial entrainment: AV nodal reentrant tachycardia (AVNRT), and atrial tachycardia (AT), (either with aberrancy, or utilizing an accessory pathway as a bystander), or atrioventricular reentrant tachycardia (AVRT) – (either orthodromic with aberrancy or antidromic). Thus, ventricular entrainment via the BiV ICD system to establish the diagnosis was performed, again utilizing NIPS which elicited a Vp-As-As-Vs response (Figure 4). This was diagnostic of atrial tachycardia, excluding both AVNRT and AVRT, for which a Vp-As-Vs response would be expected [5]. Further differentiation of these 2 diagnoses may have been possible using criteria such as the post-pacing interval-minus tachycardia cycle length [6].

After the mechanism of the tachycardia was defined by device programmed stimulation, the patient was admitted to the telemetry unit for monitoring and optimization of medical therapy, including up-titration of Metoprolol to a slow-release dose of 200mg daily. After having repeated episodes of the tachycardia, he underwent an electrophysiology study one month later. A right atrial tachycardia was induced and ablated successfully. The patient has not had recurrence of sustained atrial tachycardia at 1 year follow up.

This case illustrates the utility of an indwelling cardiac pacing device to rapidly and noninvasively establish the diagnosis of tachycardia and guide an appropriate therapeutic strategy. The initial presumptive diagnosis was VT based on patient’s history and 12-lead ECG. Had atrial entrainment not been performed rapidly excluding VT, the short- and long-term therapeutic strategies might have been completely different. For example, an incorrect diagnosis of VT might have resulted in early cardioversion in the short-term, and anti-arrhythmic drug might have been chosen before ablation, or might have been empirically chosen. Once the diagnosis of an atrial tachycardia had been established, prompt and appropriate therapy of metoprolol was initiated. Had the diagnosis been AVRT or AVNRT, ablation would have been likely chosen as first-line. Lastly, the diagnosis of atrial tachycardia was useful in planning for the follow-up ablative procedure that was proven to be effective in this patient.