Introduction: Phenytoin is a widely used anticonvulsant, but is rarely mentioned as one of the drugs responsible for atypical anti-neutrophil cytoplasmic antibody (ANCA)-associated vasculitis. Therefore, we report a case of phenytoin-induced ANCA-associated vasculitis to arouse awareness.

Case Report: A 65-year-old male patient was transferred to the emergency room with alteration of a semi-coma mental status and seizure due to intracerebral hemorrhage. Phenytoin (300 mg/day) was administered for the anti-epileptic effect but it was discontinued after one month of administration due to agranulocytosis. Approximately 50 days after hospitalization, the patient showed clinical features of acute glomerulonephritis, and results from ANCA testing (p-ANCA, anti-MPO antibody) were positive. Pathologic examination revealed suspicion of drug-induced ANCA-associated vasculitis. However, we could not determine any suspected drug at the time of pathologic diagnosis. The patient underwent hemodialysis, and high-dose steroid and IV cyclophosphamide therapy was administered to control vasculitis. Renal function was gradually recovered, and phenytoin was re-administered to treat status epilepticus. Following phenytoin retreatment, pancytopenia recurred and renal function deteriorated again. Due to the aggravation of renal dysfunction after re-administration of phenytoin and the pathologic suspicion of drug-induced ANCA-associated vasculitis, phenytoin was identified as the causative agent. Phenytoin therapy was stopped, and the renal function recovered with the disappearance of p-ANCA. The cyclophosphamide therapy was discontinued, and oral prednisolone dose was gradually tapered and discontinued after 2 months.

Conclusions: We should be aware of phenytoin as a causative agent in drug-induced vasculitis to prevent severe organ damage and fatality.

A 65-year-old male patient was transferred to the emergency room with alteration of a semi-coma mental status and seizure due to intracerebral hemorrhage. The patient had an unremarkable medical history. Phenytoin (300 mg/day) was administered for the anti-epileptic effect, but it was discontinued after one month of administration due to newly developed agranulocytosis. Ten days later, the patient had complaints of generalized edema and purpura on both legs. Laboratory tests showed acute glomerulonephritis with a serum creatinine concentration of 2.36 mg/dL, and urinalysis indicated proteinuria (2+) and hematuria (3+; red blood cell count >20/HPF). The spot urine protein to creatinine ratio (UPCR) was 10,938.4 mg/g, and the spot urine albumin-creatinine ratio (UACR) was 5,500 mg/g. Antinuclear antibody testing showed a positive result with a speckled pattern (titer 1:80), and testing for atypical pattern ANCA (p-ANCA, anti-myeloperoxidase (MPO) antibody) also showed a positive result with the titer of 12.0 index in the enzyme-linked immunosorbent assay. Serum complement level was normal, and all viral serology tests showed negative results. The kidney biopsy was performed, and on histologic examination, two out of six glomeruli showed cellular crescent with fibrinoid necrosis. Compared with glomerular change, the interstitial inflammation was active and severe, and the infiltrating inflammatory cells were polymorphous, including many numbers of neutrophils and eosinophils, with lymphocytes, plasma cells, and histiocytes. Focal ill-defined granuloma was observed in the interstitium, and there was no specific immunofluorescent activity. On electron microscopy, the foot processes were focally effaced, but there was no electron dense deposit. With ANCA-positive serologic findings, the diagnosis of necrotizing glomerulonephritis, mixed type, was completed. Based on the histological finding in the interstitium, additional comments on the possibility of drug-induced ANCA-associated vasculitis were described (Figure 1). However, we could not determine any suspected drug at the time of pathologic diagnosis. 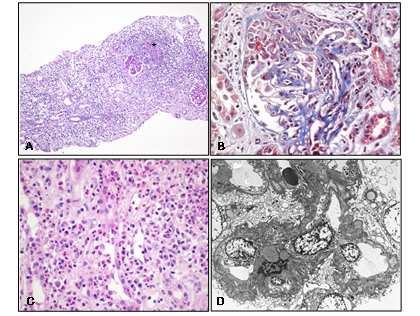 Figure 1: Histological findings of renal biopsy. A) At lower power view, near normal looking two glomeruli and actively inflammatory interstitium with focal ill-defined granuloma (★) is observed (H and E, x40). B) At high power view, another glomerulus showing cellular crescent with focal fibrinoid necrosis is observed (TRC, x400). C) A large number of PML and eosinophil infiltration are observed with lymphocyte and plasma cell infiltration in the interstitium (H&E, x400). D) On electron microscopic examination, the foot processes are focally effaced, but there is no electron dense deposit at anywhere (Uranyl acetate, x2000).

The patient was treated with high-dose methylprednisolone intravenous (IV) for three days and then oral prednisolone (1 mg/kg/day), followed by IV cyclophosphamide (500 mg/m2). Moreover, the patient underwent hemodialysis to control intractable pulmonary edema and uremic symptoms. The renal function was gradually recovered, and serum creatinine decreased to 1.43 mg/dL. After nine days of immunosuppressive treatment, the patient had another seizure, and thus was re-treated with phenytoin. Ten days after phenytoin re-administration, pancytopenia was developed again, and serum creatinine increased to 1.99 mg/dL. Because of the aggravation of renal dysfunction after re-administration of phenytoin and the pathologic suspicion of drug-induced ANCA-associated vasculitis, phenytoin was suspected as the causative agent. Phenytoin therapy was stopped. After discontinuation of phenytoin, pancytopenia was recovered, and serum creatinine levels decreased to 1.29 mg/dL. The titer of p-ANCA decreased to within the reference range (Figure 2). The cyclophosphamide therapy was discontinued, and prednisolone dose was gradually tapered and discontinued after two months. 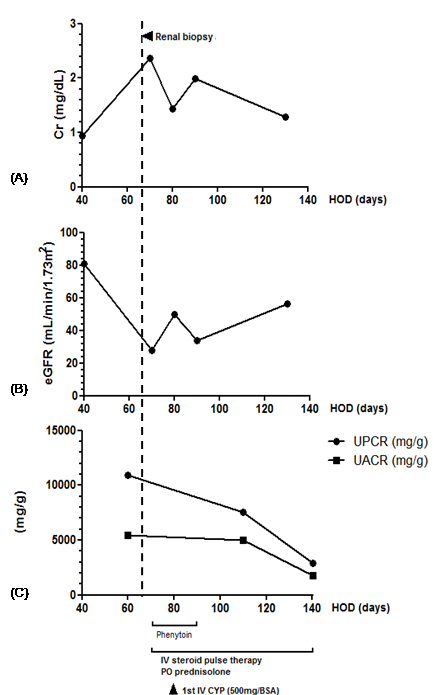 Figure 2: Clinical course of the patient. A) The change of serum creatinine concentration is shown (left y-axis).

This is a case report of a 65-old male patient with phenytoin-induced ANCA-associated vasculitis who responded well to discontinuation of phenytoin and treatment with an immunosuppressant. Drug-induced vasculitis is an uncommon type of vasculitis seen in clinical practice [4, 8]. On one hand, increasing numbers of new drugs on the market, especially biological agents, have become new causative agents associated with drug-induced vasculitis [4]. Among them, phenytoin-associated vasculitis is very rare, but its prognosis is too serious to disregard [5, 6]. In two case series with a total of 13 patients from over 20 years ago, only three patients limited to manifestations on the skin with steroids survived, but all of the rest showed mortality [5, 6]. Histologic findings revealed severe diffuse granulomatous vasculitis or fibrinoid necrosis of the vascular walls with eosinophilic infiltrate in the aforementioned case series, which has close similarity with our case. Unlike primary ANCA-associated vasculitis, drug-induced ANCA-associated vasculitis is characterized by the following; a) serum ANCA test was positive, of which the immuno-staining pattern is atypical because of its multi-antigenicity, such as mixed cytoplasmic and perinuclear fluorescence, which can be explained by the fact that ANCA is directed to one or more neutrophil cytoplasm antigens, including MPO, human leukocyte elastase, cathepsin G, and lactoferrin, and b) clinical course is temporally related to the administration of any causative drugs [8]. Clinical presentation can vary from nonspecific symptoms, such as myalgia, arthralgia and skin rash, to severe symptoms, such as multiple organ damage. The kidney is the most commonly involved organ with proteinuria, hematuria, and renal function deterioration [3, 4].

Recent advances in epigenetics, genetic predispositions, and neutrophil extracellular traps are providing new insights into the pathogenesis and identification of susceptible individuals to drug-induced vasculitis [4]. Because withdrawal of the offending agent is the primary intervention, interest and knowledge about drug-induced vasculitis are of utmost importance for earlier diagnosis and prevention of severe organ damage. In this case, we could not suspect phenytoin as the causative agent at the initial presentation although atypical p-ANCA immunostaining pattern and histologic findings suggested the possibility of drug-induced vasculitis. We were able to suspect the relation between phenytoin and vasculitis by chasing the clinical course, which declined after phenytoin re-administration. We also could confirm the connection through improvement of the patient’s clinical course following discontinuation of phenytoin treatment. This emphasizes that a high index of suspicion, careful drug history, and awareness about potential causative drugs are essential to diagnose drug-induced vasculitis earlier. There are no standard treatment guidelines for drug-induced ANCA-associated vasculitis, but steroid and immunosuppressive treatment should be considered for vasculitis that has invaded major organs [3, 4]. In this case, discontinuing phenytoin, high-dose steroid, and cyclophosphamide therapy was effective for the patient.

Because systemic vasculitis induced by phenytoin rarely occurs, this serious side effect has only been sporadically case-reported, which was not well characterized as an entity of drug-induced vasculitis. Therefore, we would like to share this case to help physicians to be more conscious about phenytoin-induced vasculitis when they prescribe phenytoin as anti-epileptic treatment.