A Dramatic Response to Immune Checkpoint Inhibitor in A Patient with A Bulky Intra Cardiac Metastasis in Renal Cell Carcinoma: A Case Report

Case Presentation: A 51-year-old man was treated by radical nephrectomy and hepatic segmentectomy in 2008 for a locally advanced clear cell renal cell (CCRC) carcinoma. Between 2009 and 2015, successive localized progressions were treated by several focal treatments, including surgery and interventional radiology, and intermittent TKIs. Because of systemic dissemination with a bulky intracardiac metastasis, the patient received anti-PD1 nivolumab with a dramatic response. In 2017, a new disease progression at the site of the nephrectomy recurrence was treated with surgery. But, subsequent to the surgery, an acute promyelocytic leukemia was diagnosed. A specific treatment was started and nivolumab was not reintroduced. In March 2018, CR of the leukemia with negative MRD was achieved. In March 2019, the dramatic efficacy on the intra cardiac metastasis and nephrectomy lodge was still maintained.

Conclusions: Cardiac metastases are considered to be rare and no standard treatment is validated. We report the first case of an IO blocker response on cardiac metastases in the context of mRCC. In addition, immunotherapy efficacy was maintained over time, even after treatment discontinuation and regardless of metastasis localization.

A major breakthrough for patients with metastatic renal cell carcinoma (mRCC) has been observed during this past decade. Currently approved targeted agents include the oral multitargeted tyrosine kinase inhibitors (TKIs) sunitinib, pazopanib, cabozantinib and axitinib [1-4]; immune checkpoint inhibitors (IO) anti-PD-1 nivolumab [5], anti-CTLA4 ipilimumab [6] and the mammalian target of rapamycine kinase inhibitors everolimus, and tesmirolimus [7]. Common sites of RCC metastases are lymph nodes, lung, liver and bone. In addition, natural history with prolonged survival has changed under treatment pressure, with the onset of most frequent brain or pancreatic metastases or unexpected presentation as in our clinical case. Although cardiac involvement via the inferior vena cava (IVC) thrombi is well-known, cardiac metastasis in RCC is a rare event with only a few cases reported worldwide and no validated treatment. Because of the high risk of sudden death, specific multi-disciplinary management is required.

In July 2008, a 51-year-old male patient with no significant medical history was diagnosed with a locally advanced clear cell renal cell (CCRC) carcinoma that was treated by radical nephrectomy and hepatic segmentectomy, due to contiguity. Eleven months later the patient developed two single lung and liver metastases, for which a systemic treatment by sunitinib was initiated. Successive localized progression was treated by several focal treatments, including portal embolization, right hepatectomy and carcinomatosis nodule resection in April 2011, lung and liver radiofrequency in March 2012, and hepatic tumorectomy in June 2012. Complete macroscopic remission observed after surgery led to discontinuation of sunitinib.

Twenty months later, in February 2014, the patient’s lung metastasis progressed and he started sunitinib again. After two years of treatment, the patient developed lung progression and a nephrectomy site recurrence that was treated by axitinib. At the time of the second month of treatment, in February 2016, lung and nephrectomy site recurrence increased significantly and a bulky intracardiac metastasis appeared, despite no symptomatic event and no contiguous veina cava involvement (Figure 1A). The patient was included in the NIVOREN study (NCT03013335) and received nivolumab at 3mg/kg, with a dramatic response after 10 months of treatment (Figure 1B).

In July 2017, the patient experienced rectal bleeding with acute anemia. The whole body CT-scan revealed disease progression at the site of the nephrectomy recurrence associated with colonic invasion due to contiguity (Figure 2A). A right colectomy and resection of local nephrectomy recurrence was urgently performed. Histologic analysis confirmed the presence of viable tumour cells, and necrosis. Nivolumab was planned to restart again. But, subsequent to the surgery, an acute promyelocytic leukemia with translocation between chromosome 15 and 17 was diagnosed. A specific treatment was started and nivolumab was not reintroduced. In March 2018, complete remission of the leukemia with negative minimal residual disease was achieved (Figure 3). After twenty-one months of nivolumab interruption, in March 2019, the dramatic efficacy on the intra cardiac metastasis (Figure 1C) and nephrectomy lodge (Figure 2B) was still maintained. 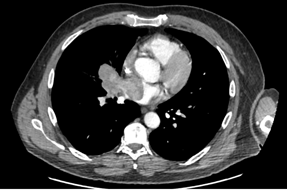 Figure 1A: occurrence of a bulky intracardiac metastasis or RCC in February 2016. 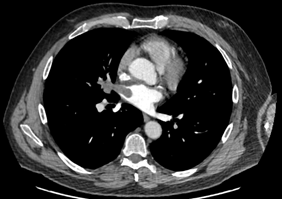 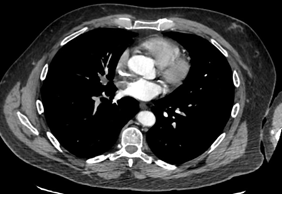 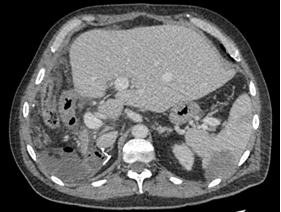 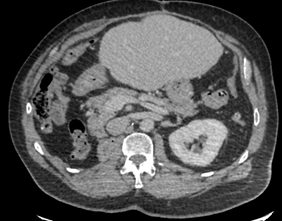 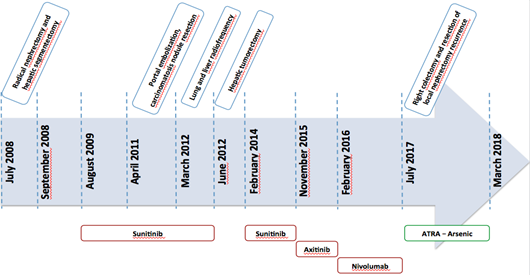 Figure 3: Timeline between initial diagnosis in July 2008 and complete remission in March 2018.

Cardiac metastases from RCC are considered to be rare. Currently, two series of autopsies have shown an incidence ranging from 1 to 7% [8-9]. The extension of mRCC to the heart is usually associated with inferior vena cava (IVC) involvement, occurring in 4 to 10% of cases especially in advanced disease [10]. At present radical surgery represents the only chance of long-term survival for patients with RCC and tumour thrombus extension into the vena cava, with a median survival of 19.8 months for patients who underwent surgery compared to 6.9 months for patients who did not [11]. Only limited data has so far been reported as to the efficacy of TKIs, alone or combined with surgery, in the context of IVC thrombus extension. In a small French retrospective serie of 14 patients, neoadjuvant TKIs (with either sunitinib or sorafenib) failed to demonstrate a significant impact on surgical management of RCC with IVC involvement [12], with respectively 12 cases (85%) of stable thrombi and one case (7%) of thrombus progression. In addition, a multi-institutional review of 25 patients treated with TKIs before surgery showed a minimal cytoreductive effect on RCC tumor thrombi [13], with no clear clinical relevance. Only one case (4%) of tumour thrombus regression potentially affected the surgical approach.

Despite the frequency of renal tumors with IVC and atrial thrombi, little is known about cardiac metastases from RCC with only a limited number of cases reported in the literature. Cardiac metastases from RCC seem to occur through two mechanisms, including the venous hematogenous pathway and lymphatic pathway [14]. In a recent systematic review of reported clinical cases from 1973 to 2015, the analysis of 39 RCC patients with cardiac metastases without IVC involvement highlighted the poor outcomes [15]. With regard to specific medical management, 30.8% (12/39) of patients received systemic therapy, of whom 82% received VEGF targeted agents. Out of these 12 patients, partial responses were documented in five patients (12.8%), two of whom received TKI sunitinib, and stable disease was reported in one patient treated with sunitinib. Karakiewicz et al. reported a neoadjuvant setting using sunitinib to downstage an atrial thombus [16]. No case of systemic treatment with IO blocker has been reported.

To our knowledge, we report the first case of an IO blocker response on cardiac metastases in the context of metastatic RCC. In addition, immunotherapy efficacy was maintained over time, even after treatment discontinuation and regardless of metastasis localization. Targeted therapies and systemic treatments including immune checkpoint blockers of mRCC have never been assessed in the context of cardiac metastases without IVC involvement and further studies and observations are warranted to understand the mechanism of action and specific aspects of this entity.

In summary, this case illustrates the major role of immune checkpoint blocker efficacy on an uncommon metastasis with a durable response, even in the case of treatment discontinuation.

Availibility of Data and Material

The datasets generated and/or analysed during the current study are not publicly available due to french legislation on data from public hospital but are available from the corresponding author on reasonable request.