Case report: A 13 year premenarchal female was transferred to our unit for acute abdomen and MR findings of left renal agenesis, blind hemivagina distended by ematic material, complete uterus duplication , dilated tuba and left ovarian mass with torsion. A diagnostic laparoscopy was performed during which detorsion of the ovarian tubal complex was performed with resection of ovarian cyst.

Summery and Conclusion: This is a rare syndrome and ovarian torsion is never reported as complication

Herlyn-Werner-Wunderlich syndrome is a rare urogenital anomaly consisted of renal agenesia, uterovaginal duplication and ipsilateral blind hemivagina. Usually it presents some months after menarche with pelvic pain, acute abdomen, intermenstrual bleeding. This symptoms and signs are due to salpingitis process or ematocolpo. Herlyn-Werner-Wunderlich (HWW) syndrome is a very rare congenital anomaly of the urogenital tract involving Müllerian ducts and Wolffian structures. The association of obstructed hemivagina and uterus didelphys was first reported in 1922. In 1971 and later in 1976 htere was the final triad association [1]. The incidence of HWW syndrome seems to be approximately 1 / 2,000 to 1 / 28,000, and 40% of these patients had associated renal agenesis [1-4]. We describe a case of a young girl with the classic HWW triad with associated ovarian torsion detected during acute abdominal pain.

A 13 year old girl, with 5 months irregular menstruation, was transferred to our unit for acute abdominal pain and vomiting with an MR (MAGNETIC RESONANCE) findings of left renal agenesis, blind hemivagina distended by ematic material, complete uterus duplication, dilated tuba and left ovarian mass with torsion. A diagnostic laparoscopy was performed during which detorsion of tubo-ovarian complex was performed and the ovarian cyst and inflamed tissue covering the ovary were resected. She underwnet also the vaginal septal resection.The histological analysis distinguished cystic tissue without neoplasia.Post-operative time was good and at present she is followed by gynecologists (Figure 1-3). 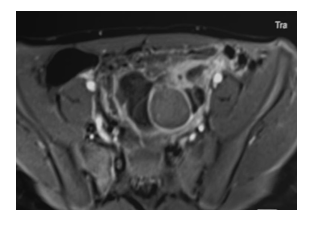 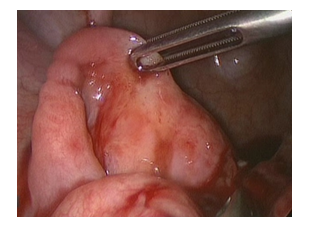 After the first reported paper about this syndrome, in medical Literature are present 133 manuscript with 276 cases since 1979. Among cases of HWW syndrome, it is usually discovered at puberty with non-specific symptoms, like increasing pelvic pain, dysmenorrhea and palpable mass due to the associated haematocolpos or hematometra, which result from retained, longstanding menstrual flow in the obstructed vagina.In Literature there are few report about rare association such as acute urine retention, urine incontinence, cancer, pregnancy, infertility or trauma [2-7]. Ultrasound and MRI are the most widely used diagnostic tools. However, MRI is considered to be more sensitive for imaging soft-tissue anatomy and it is the imaging modality of choice for the diagnosis and classification as it provides details about uterine morphology, including contour and intrauterine cavity shape and continuity with each vaginal lumen, and nature of the fluids in these cavities. It can also identify associated pathologies such as endometriosis, pelvic inflammation and adhesions, as well as renal abnormalities [3-8].

Even if the resection of the vaginal septum is the treatment of choice of obstructed hemivagina, the use of laparoscopy in cases of acute abdominal pain as been reported also to have confirmation of pelvic malformation. To our knowledge this is the first case reported with ovarian torsion as first symptoms. In our case laparoscopy was necessary for the ovarian torsion, but it was also useful for the ovarian cyst.

HWWS is a rare disorder that is relatively unknown by medical professionals and its associated dysmenorrhea is often misdiagnosed as other, more common causes of dysmenorrhea in teenagers. Prompt and accurate diagnosis of female reproductive tract disorders, including HWW syndrome is necessary to prevent complications. Early recognition of this relatively rare syndrome, especially for its rare complication as ovarian torsion, would lead to offer the immediate treatment to preserve future fertility. As suggested for young female, tubo-ovarian complex should be preserved after detorsion.

I have no conflict of interest or founding.