A Sleeping Giant - A Case Report of Echinococcosis

Echinococcosis is a parasitary disease produced by Echinococcus spp. It is endemic in some European regions such as Portugal. We present the case of a patient who was admitted for de-novo ascites. In the course of the investigation, a bulky hepatic hydatid cyst was diagnosed. The cyst was in the inactive phase of the disease, calcified and it bore no symptoms. The ascites was due to heart failure and resolved with appropriate treatment. The relevance of the case relates to the exuberance of the cyst and the interesting images obtained.

The authors present the clinical case of an independent 90 years-old man with medical history of hypertensive and ischemic cardiopathy with heart failure; colon cancer in 2008 with complete remission and MGUS IgG/k. The patient was admitted in the medical infirmary with de novo ascites. During the course of clinical investigation some results were prominent – mild eosinophilia, hyperbilirubinemia with conjugated bilirubin elevation. The abdomen radiography showed a nodular image on the right hypochondrium (Figure 1), which was, then reviwed by computed tomography (CT scan). The CT scan revealed a 9.5 cm multiseptated cyst in the right lobe with calcified walls suggestive of hidatid cyst (Figure 2). Echinococcus granulosus serology was negative. The case was discussed in a multidisciplinary reunion and a conservative approach was adopted as the cyst was calcified. The patient was medicated for 21 days with albendazole wih resolution of eosinophilia. The etiology of ascites was associated with heart failure and resolved with diuretics. 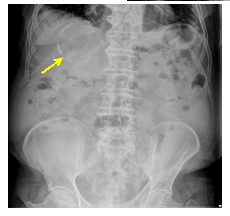 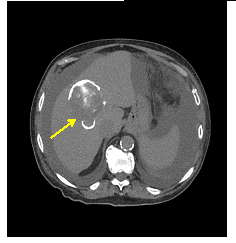 Figure 2: Abdomen CT scan, horizontal cut, yellow arrow shows hydatid cyst on the right lobe of the liver – the contrast enhances the round lesion compatible with a ringlike pattern of calcification. 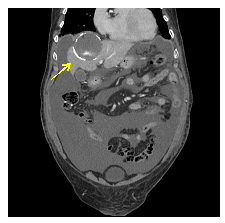 Hepatic hydatid cyst is a small spectrum of the disease produced by Echinococcus parasites. There are four species of Echinococcus that can produce disease in humans - E. granulosus, E. multilocularis, the most common; E. vogeli and E. oligarthrus, extremely rare. E. granulosus is responsible for the hepatic disease, whereas E. multilocularis is accountable for the pulmonary hydatid cyst. A definite host (usually the dog) transmits the parasite to the human (fecal-oral transmission), and, once in the blood stream it can reach and accommodate in several different organs where a cyst will be produced.

The clinical course will depend on the affected tissue due to mass effect (e.g., cough, dispnea, hemoptysis if it affects the lung; abdominal pain, nausea and vomiting in the case of hepatic cyst). The host immune response creates a fibrous capsule that evolves the cyst, and, in time becomes calcified. The major associated complication is cyst rupture that can lead to sepsis or anaphylactic shock by spreading of the cyst continent. The right lobe is the most frequently involved portion of the liver. The natural evolution of the disease is the calcification of the entire cyst, with death of the parasite. A classification system has been developed to adjust the best therapeutic option. The classification is based on the cyst ultrasound characteristics.

The diagnosis is made by image technique – ultrasound, CT or magnetic resonance – and the lesions can vary from pure cyst to completely calcified lesions. Calcification is seen in X-rays in 20-30% of hydatid cysts, shown as a ring-like hyoptransparent lesion. The serology for the Echinococcus is useful for diagnosis and to survey treatment response.

Surgical removal and anti-parasite medication is the definite treatment. The drug of choice is albendazole. The second options are mebendazole and praziquantel. Albendazol is given in a 400 mg dose two times per day. If the cyst is completely solidified it is thought to be inactive and surveillance is the best option in absence of symptoms.

Hydatid cyst is an increasingly less frequent form of disease due to the awareness of animal vaccination in urban as well as rural environments. Nevertheless, it is important to remember the existence of the disease so that we can adequately treat our patients. In this clinical case, the diagnosis of hepatic cyst hydatidosis was incidental for it bared no associated symptoms nor was implied in the process of ascites. Even so, we wanted to share the interesting images as well as to highlight some aspects of the disease.