Trigeminal neuralgia is a chronic pain syndrome that affects the trigeminal nerve. The condition was first described as paroxysmal excruciating, unilateral facial pain by John Fothergill in 1973 [1]. Facial pain is an ill-understood disorder, which may include the mouth and face. The issue of facial pain was reviewed thoroughly by NIH in 1996, and it was concluded that major problem arises due to the ambiguous diagnostic classification and treatment hence new diagnostic criteria to categorize facial pain has been introduced. Artificial variance in the clinical signs and symptoms lead the patient to consult with multiple specialists including dentist, neurologist, otorhinolaryngologist, psychiatrist with no or little collaborations. These patients are treated with different drugs before reaching the final diagnosis. Trigeminal neuralgia is broadly classified into two major subtypes as typical and atypical trigeminal neuralgia [2]. The former is described as repetitive attacks of sharp, severe, excruciating pain with pain-free intervals while the latter is characterized by dull burning facial pain. The exact underlying pathophysiology of the disease is still unknown but the symptoms are due to the loss of myelin sheath surrounding the trigeminal nerve secondary to vascular compression, multiple sclerosis, stroke, trauma, and intracranial hypertension [1]. Facial pain is the main feature of the trigeminal neuralgia but it could be the symptoms of multiple sinogenic and non-sinogenic disorders, it is important to distinguish sinogenic pain caused due to sinusitis from non-sinogenic facial pain caused by other etiologies such as trigeminal neuralgia, migraine and idiopathic intracranial hypertension to avoid imprecise treatment at early stages and for a better prognosis.

A 56-years-old mildly obese female presented with a history of right-sided facial pain and redness from three years. The pain was severe and sharp and involved her cheek, jaw, teeth, gums, lips, forehead and periorbital region. Attacks of pain were spontaneous in the beginning but progressively increased in frequency and severity with time. The patient also gave a history of postnasal dripping, facial fullness, headache, sneezing and purulent nasal discharge. The patient denied a history of facial or head trauma, dental caries, herpes zoster infection, giant cell arteritis, and stroke. Other medical and surgical history was unremarkable. On examination she was afebrile (98.6F), her blood pressure was 120/75 mmHg, her pulse was 88bpm. Head and neck examination revealed no lymphadenopathy and reflex test for trigeminal neuralgia was completely normal. No abnormality was detected on neurological examination and facial sensations, masseter bulk, and strength, corneal reflex were normal. Sinus palpation performed revealed slight tenderness over frontal and maxillary sinuses. Oropharyngeal erythema and purulent secretions were noted in the oral cavity examination. However, anterior rhinoscopy did not show any polyps, nasal mass or turbinate hypertrophy. The examination of the abdomen, lungs were completely normal. Laboratory investigations including complete blood count (CBC), liver function tests (LFT), erythrocyte sedimentation rate (ESR), and C reactive protein were normal. Furthermore, serological assays for herpes simplex virus, human immunodeficiency virus were negative. Computerized tomography (CT) scan revealed mucosal thickening, bone changes, air-fluid level confirming the diagnosis of chronic sinusitis. The patient was prescribed antibiotics repeatedly to relieve the symptoms but her condition did not improve. Functional endoscopic sinus surgery was performed. Multiple follow-ups in two months revealed persistent facial pain. Repeat CT scan didn’t show any significant changes. Contrast-enhanced MRI was performed to rule out other causes of facial pain and pressure and it showed idiopathic intracranial hypertension with compression of the right trigeminal nerve in Meckel’s cave causing trigeminal neuralgia. 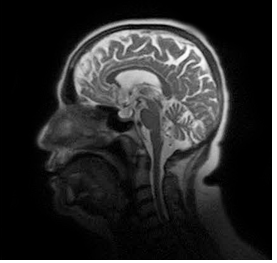 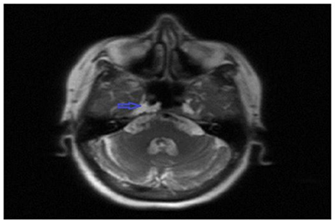 She was prescribed high dose gabapentin and her condition improved significantly. Treatment of neuropathic facial pain should always be considered when facial pain is resistance to medical and surgical therapy.

Trigeminal neuralgia, also known as “tic douloureux” is a nerve disorder of the face. Trigeminal neuralgia affects the trigeminal nerve, one of the most widely spread nerves in the face causing abrupt, searing facial pain, especially in the lower jaw, around the nose, ears, eyes or lips with a prevalence rate of 0.015% in the general population [5]. Furthermore, the prevalence of this disorder is more common in advanced age and rarely involving patients younger than 40 years of age. It most commonly involves the right side of the face as compared to the left side [6, 7]. Studies conducted by Fromm et al shows that the emergence of symptoms with trigeminal neuralgia has not always followed a consistent pattern and some patients reported pre trigeminal neuralgia syndrome emerging gradually with different the symptoms [8]. These symptoms included unwavering sinus pain or toothache lasting for variable periods while aggravating on eating and drinking. Therefore, patients suffering from trigeminal neuralgia do seek dental and otolaryngologist advice first before approaching a neurologist. The facial pain caused due to trigeminal neuralgia as an underlying pathology has been identified as the most frequent type of facial pain over recent years [9]. The pain of trigeminal neuralgia is not only limited to 1 of 3 divisions of the trigeminal nerve but it commonly involves mandibular and maxillary division more than the ophthalmic division as stated in Maarbjerg et al. study [10]. The episodes of pain are severe with the paroxysmal pattern, and lasting less than 20 seconds. During the attack, patients usually exhibit grimace, wince or aversive head movements as an attempt to escape the pain giving the impression of tics, therefore, the term “tic douloureux” is often used to describe trigeminal neuralgia.

The treatment for trigeminal neuralgia is burdensome since the recurrence rate after medical and surgical therapy is unreasonably high. Conventionally, the first drug used for the treatment of trigeminal neuralgia was phenytoin with reported positive effects but recently the first-line drugs approved by EFNS guidelines have been changed to carbamazepine and oxcarbazepine as both these drugs are effective in controlling the intensity and frequency of attacks [13]. However, it is not uncommon to present with recurrent pain after surgical and medical therapy of this disorder and various treatment modalities have been tested. According to Hu et al., the safety and efficacy of botulinum toxin type A have been established in patients before surgery or patients reluctant to surgical management [14]. A wide range of surgical interventions is also available to cure the pain of trigeminal neuralgia which includes microvascular decompression, radiofrequency thermocoagulation, gamma knife radiosurgery, percutaneous balloon compression, and glycerol rhizotomy. Gamma knife radiosurgery is a successful treatment modality, but microvascular decompression still stands out as it provides a long-term pain-free status [15-18]. In our study, the patient was treated as a case of chronic sinusitis for facial pain through medical and surgical interventions. Failure of the correct diagnosis and treatment resulted in a poor quality of life, prolonged duration of the treatment, and persistence of pain. Hence, the case highlights the importance of excluding non-sinogenic etiology for facial pain first before linking it to the sinogenic origin.

The diagnosis of facial pain due to trigeminal neuralgia is often challenging because a wide range of facial neuralgias follows a similar pattern. Differentiating sinogenic pain from non-sinogenic pain is a strenuous task as most of the patients referred to an otolaryngologist with a hypothetical diagnosis of rhinosinusitis as a cause of their facial pain and frequently ends with a confirmed diagnosis of some other non-sinogenic etiology as a cause of discomfort. It delays the diagnosis and these patients are commonly mistreated. Early diagnosis with appropriate imaging modalities is cost-effective, improves the patient’s quality of life and prevents unnecessary intervention.

This manuscript is original research, has not been previously published and has not been submitted for publication elsewhere while under consideration. Authors declare no conflict of interest with this manuscript. The authors have no relevant affiliations or financial involvement with any organization or entity with a financial interest in or financial conflict with the subject matter or materials discussed in the manuscript. This includes employment, consultancies, honoraria, stock ownership or options, expert testimony, grants or patents received or pending, or royalties.