An Occlusive Syndrome with Dabigatran Overdose

Purpose: The aim of this case report is to describe the management of a severe dabigatran overdose in the context of an intestinal obstruction.

Clinical Description: Here we report the case of a 75-year-old female patient treated with dabigatran etexilate (150 mg, twice daily), requiring emergency surgery in the context of small bowel occlusion. On admission, the patient presented a severe dabigatran overdose without acute renal insufficiency. The first coagulation test showed a dabigatran concentration of 2,361 ng/ml. Before surgery, three sessions of intermittent hemodialysis (IHD) were performed without ultrafiltration, with a duration of 4 to 8 hours in order to decrease blood concentrations of dabigatran. The surgical procedure, performed by exploratory laparotomy, revealed an occlusion of the small intestine flange. During surgery, no abnormal bleeding occurred.

Conclusion: We hypothesized that the occlusive syndrome had probably increased bioavailability of dabigatran leading to overdose. This report confirms efficiency and indication of HDI during dabigatran overdose before emergent surgery.

Nowadays, 13% of patients with atrial fibrillation were treated by Non-vitamin K antagonist Oral Anticoagulant (NOAC) in Europe [1]. Major bleedings occurred from 0.6% to 3.3% of patients treated with dabigatran [2]. After hospital discharge, 11.8% needed long term facility before return at home [2]. The crude mortality 30 days after the onset of major bleeding was 10% [2]. Until 2016, absence of antidote for dabigatran reversal was a major issue for patients treated by dabigatran in case of major bleeding or emergency surgery. In 2013, Working group on Perioperative Hemostasis proposed a strategy based on the analysis of specific dosage of dabigatran when the specific assays are available or on routine haemostasis tests [3]. Therefore, dabigatran is the only NOAC that can be dialyzed [4]. Except case series, no specific guidelines of renal replacement therapy (RRT) has been defined in this context and no prospective studies showing effectiveness before an urgent surgical procedure has been published [5]. In 2016, arrival of a specific antidote of dabigatran (Idarucizumab, Praxbind®) modified hemostatic management in case of emergent surgery or major bleedings [6]. Nowadays, all dabigatran overdose reported occurred in case of acute kidney injury (AKI) [5]. Here, we reported a case of a massive dabigatran overdose (2,361 ng/ml) which occurred in context of intestinal occlusion without AKI.

A 75-year-old female patient, 50 kg, treated by Dabigatran (150 mg, twice daily) and Flecaïnide acetate for atrial fibrillation with a CHADS VASC score of 3, was admitted in the emergency department for an occlusive syndrome lasting for 5 days. Her past medical history included atrial fibrillation, chronic kidney disease with an estimated Glomerular Filtration Rate (eGFR) of 51 ml/min/1.73m2, meniere disease, age-related macular disease, stroke, vesicular calculi, left breast cancer (treated by lumpectomy, axillary lymph node resection and radiotherapy) and appendectomy. An abdominopelvic CT scan confirmed the presence of an occlusive syndrome of the small bowel, without sign of ischemia. The results of her laboratory investigations showed a creatinine of 66 µmol/l (eGFR=51 ml/min). The first dosage of dabigatran showed an overdose with concentration of 2,361 ng/ml. Coagulation test reported a prothrombin time (PT) of 28% and an activated Partial Thromboplastin Time (aPTT) ratio of 1.6. These tests were performed 16 hours after the last delivered dose of dabigatran. Being a deferrable surgery and given the significant risk of perioperative bleeding complications, it was decided to postpone the surgery until a dabigatran dosage close to 30 ng/ml was reached. No specific antidote was available at that time. In order to decrease blood dabigatran’s level, the patient underwent several hemodialysis sessions.

Three sessions of intermittent hemodialysis (IHD) were performed without ultrafiltration, with a duration of 4 to 8 hours (two sessions IHD 4h and one session 8h) at a flow rate from 5 to 6 ml/kg/min (or 250 to 300 ml/min). The patient received six fresh frozen plasma (FFP) associated with 2,000 IU (40 IU/kg) of non activated prothrombin complex concentrates (PCC, octaplex®, Octapharma). Iterative measurements of dabigatran were made as well as regular dosage of haemostasis parameters (as shown in Figure 1 and Table 1). At day 2, the patient presented an alteration of her clinical state with the occurrence of a septic shock. She was treated accordingly to the international recommendations [7]. Therefore, emergency surgery was decided despite the potential risk of bleeding complications. Before surgery, the concentration of dabigatran was 127 ng/ml, leading to the administration of non-activated PCC at the dose of 1,000 IU (20 IU/kg) despite no clinical bleeding. 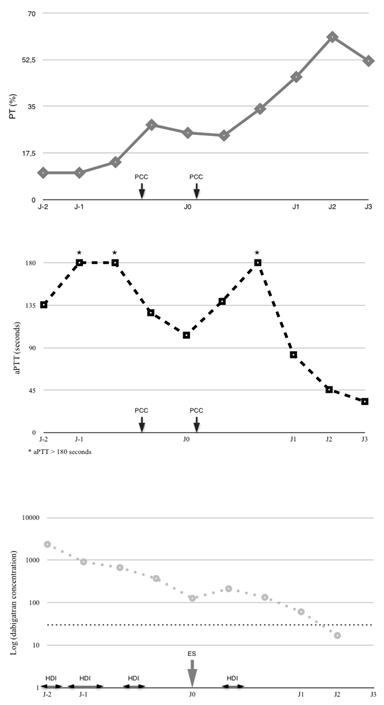 The surgical procedure, performed by exploratory laparotomy, revealed an occlusion of the small intestine flange with ischemic suffering, but no necrosis, therefore bowel resection was not performed. No sign of peritonitis was found. During surgery, no abnormal bleeding occurred.

After surgery, a rebound of dabigatran level was observed from 127 to 213 ng/ml. Another hemodialysis session of 4 hours was performed with an output of 6 ml/kg. It allowed to reduce dabigatran concentration to a level of 16.9 ng/ml. Then, clinical evolution became favorable and the patient left ICU at day five after surgery.

3.1 How this dabigatran overdose can be explained?

Renal function is the principal determinant of dabigatran plasma concentration but this relationship is not linear. Liesenfeld and al. demonstrated that decreasing creatinine clearance from 100 ml/min to 80 ml/min and from 50 to 30 ml/min respectively increased dabigatran concentration by 11% and 50% [11]. All dabigatran overdose and dabigatran-associated bleeding case series reported an acute renal insufficiency as the main risk factor [5]. These results are reinforced by large randomized controlled trials which compared dabigatran and warfarin. In a pooled analysis from 5 large randomized controlled trial, Majeed and al. reported more major bleedings for patients with a significantly lower estimated glomerular filtration rate (mean eGFR=53 ml/min/1.73m2) and receiving dabigatran [2]. Recently, the Heart Rhythm Association underlined that estimated dabigatran half-lives increases respectively up to 17 hours and 19 hours respectively for patients with eGFR ranged from 50 to 80 ml/min/1.73m2 and 30 to 50 ml/min/1.73m2 [9]. FDA approved the use of dabigatran (150 mg, twice daily) for patients with eGFR > 30 ml/min/1.73m2 [12]. However this can not explain the Dabigatran overdose observed in our case report as the first dabigatran dosage revealed a massive overdose (up to 25-time normal range) without the presence of an acute kidney injury. On ICU admission, baseline eGFR was calculated at 51 ml/min/1.73m2, which was her usual creatinine clearance. As for intentional intoxication (up to 11,25 g of dabigatran, corresponding on 75 pills), ones reported in literature a plasmatic concentration less elevated (970 ng/ml) than those measured in our case [13]. We hypothesized that progressive intestinal accumulation of dabigatran during the occlusive syndrome had probably increased its bioavailability leading to overdose. Moreover, the inflammation of intestinal walls may have increased dabigatran absorption. In pharmacokinetics and pharmacodynamics studies, an inceased dabigatran frequency of administration increased the dabigatran plasmatic concentration [14]. Therefore, intestinal absorption of dabigatran does not saturate. To our knowledge, no previous report describes a potential link between intestinal occlusion and severe dabigatran overdose.

3.2 Use of renal dialysis during dabigatran overdose

Hemodialysis and broadly renal filtration is suggested by French experts in case of dabigatran overdose [3]. Case reports in literature mentioned a preference for hemodialysis (HDI) than hemofiltration (CVVH, continuous veno venous hemofiltration). In our case, hemodialysis was rapidly effective with a 2/3 decrease of dabigatran concentration, after one session, in less than 24 hours (2361 ng/ml to 914 ng/ml). This was more effective than previous reports on the subject [15, 16]. This different kinetics can be explained by the hemodialyser’s membrane used in our case and also by length of sessions [11].

A solution to optimize dabigatran elimination in this situation might be to increase the length of the sessions rather than blood flow rate. Indeed, the doubling of blood flow rate from 200 ml/min to 400 ml/min have only a small impact on clearance of dabigatran in terminal renal insufficiency (increase in clearance of 30% lead to a reduction in plasma concentration of 8%) [17].

We also observed a substantial rebound after HDI sessions as dabigatran concentration increased from 127 ng/ml to 213 ng/ml, just after the surgery. This rebound was reported in several observations [15, 17]. The use of CVVH in addition to HDI with patients presenting a rebound effect has been suggested. Recently, Chai-Adisaksopha et al. published a systematic review about hemodialysis for dabigatran removal which include 22 studies [18]. Before renal replacement therapy (RRT), the median dabigatran concentration measurement was 315 ng/ml. After RRT, the plasma dabigatran concentrations were reduced by 33 to 99%. A median concentration rebound of 33,5% was observed (18-82%), occurred 20 minutes to 12 hours after RRT [18].

3.3 Can we antagonize dabigatran?

In our case, hemostasis tests cannot well predict the risk of a hemorrhagic event. Currently, it is proposed in case of surgical emergency to measure serum concentrations of dabigatran and a concentration below 30 ng/ml is considered to be safe. However, in our case report, despite a concentration well above 30 ng/ml, no significant bleeding occurred during surgery [3]. Thus, the occurrence of bleeding complications is not strictly related to dabigatran blood levels. This report strikes the fact that no standard hemostasis test is currently sensitive enough to judge the effectiveness of a PCC administration in this context.

Since 2016, arrival of a specific antidote to dabigatran (aDabi-Fab idarucizumab) may change our practices in the future [19]. In 2017, Pollack et al. demonstrated that idarucizumab reversed rapidly and safely effect of dabigatran in case of uncontrolled bleeding or emergency surgery [20]. One dose of Idarucizumab (5 g) costs 1,500 euros and this therapeutic are not available in all institutions. Then, efficacy and cost-effectiveness of Idarucizumab were never compared to less expansive therapies (like dialysis and CCP). Actually, French institutions approve use of Idarucizumab (PRAXBINDÒ, Boehringer Ingelheim) in two situations: (i) an emergent surgery which can’t delayed more than eight hours, (ii) potential fatal bleeding or occurring in critical area/organs (intracranial bleeding). Updated guidelines recently published recommended the administration of Idarucizumab in case of urgent invasive procedures (with very high risk of hemorrhage or high risk of bleeding if procedure could not be proceed) and severe bleeding (with life threatening and/or functional consequences) [6].

In conclusion, this report describes a severe dabigatran overdose in context of small bowel obstruction. It also confirms the efficiency and indication of HDI during dabigatran overdose. It also points out that the use of PCCs and the FEIBA® remains poorly evaluated in a clinical setting. The choice to defer urgent action to antagonize or accelerate the renal elimination of these drugs in the absence of evidence of bleeding is a difficult decision for which we lack data guide our clinical practice. Idarucizumab is now available and may have changed the care in this particular case.

Here we report the case of a patient treated with dabigatran etexilate, requiring emergency surgery in the context of an intestinal obstruction. She presented a dabigatran overdose (2,361 ng/ml) without acute kidney injury. It required several sessions of intermittent hemodialysis. We hypothesized that occlusive syndrome had probably increased bioavailability of dabigatran leading to the overdose.