An Unusual Cause of Thoracic Pain in a Child

Citation: van Berkel MM, Mérelle ME, Gorter RR, Oomen MW. An Unusual Cause of Thoracic Pain in a Child. Archives of Clinical and Medical Case Reports 3 (2019): 368-371.

In adults, late presentation of traumatic diaphragmatic hernia is well known. In children it is rarely reported. We report the case of a fourteen-year-old boy that presented on the emergency department of our hospital with progressive pain at the right hemi thorax. Only with a thorough medical history, a relationship between his complaints and a car accident nine years ago could be made. This resulted in the right diagnosis. At first presentation after thoracic and/or abdominal trauma, there must be awareness of the possibility of diaphragmatic rupture, although the prevalence is low. There is a high chance of missing diagnosis by overshadowing complaints and diagnostic difficulties. The hernia can be discovered years after trauma. Management is primarily surgical.

A fourteen-year-old boy complained of lancinating pain at the right hemi thorax. The pain exacerbated after a meal. The chest X- ray ordered by the general practitioner showed no signs of pneumonia, pneumothorax or lesions of the ribs (see figure 1A). The elevated position of the liver was interpreted as an elevated hemi diaphragm, whereby a diaphragmatic paralysis was suspected. The patient was referred to our outpatient clinic. For three days prior to this appointment he experienced mild dyspnea and progressive pain. He had a cold and the pain exacerbated with coughing. On physical examination there was decreased air-entry at the base of the right lung and bowel sounds were heard over the right hemi thorax. Examination of the abdomen was normal. A new chest X-ray showed several bowel loops in the right hemi thorax and a right elevated hemi diaphragm. In retrospect, there were already bowel loops seen in the thorax on the first chest X-ray (see Figure 1A and 1B). With a more detailed history of the patient, it turned out that the patient was hospitalized in July 2009 after a car accident in Turkey. He had cerebral contusion with right-sided hemiparesis, and several fractures of ribs and lumbar spine. A chest-X-ray, ultrasound of the abdomen and computerized tomography directly after trauma showed no aberrations of the diaphragm. His fractures were surgically repositioned. Since a year he was snoring over the night and had several apneas during sleep. He had no eating difficulties, or history of bowel obstruction.

The patient was referred to the pediatric surgeon. He underwent a thoracoscopy. All liver segments appeared to be in the thorax. During the procedure, the rupture of the diaphragm seemed too small to reposition all liver segments to the abdomen, so there they switched to thoracotomy. The diaphragm was closed with mersilene sutures. A Goretex patch was placed over the rupture to prevent dehiscence. After surgery he developed increased liver enzymes due to stowing of the liver during surgery. In addition, by prolonged oppression, his right lung did not expand in total due to lung hypoplasia (Figure 1C). He experienced systemic inflammatory response syndrome (SIRS), treated with diuretics. Six days after surgery he left the hospital and started with revalidation therapy. 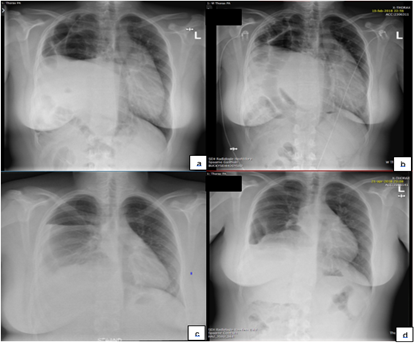 Traumatic diaphragmatic hernia is mostly caused by blunt or penetrating traumas [2, 6], usually motor vehicle accidents [3, 5, 6]. It is well known that the diagnosis of a traumatic hernia can be frequently missed at first presentation. Because symptoms are phage, they are usually not immediately related by the patient to the earlier experienced accident [6,7]. A study by Walchalk et al. in adults found that 30-50% of diaphragmatic hernia was missed at first presentation [8]. Only 25-50% is diagnosed on the first chest X-ray. Another 25% is detected on following X-rays [2]. Because the liver can cover the right side of the diaphragm following the diaphragmatic contours a hernia can be difficult to detect. [6] Moreover, the quality of the radiograph and the upright position of the patient can make it also difficult [8]. Computerized tomography is a better imaging technique to examine the diaphragm. It has a reported diagnostic sensitivity of 14-82% and a specificity of 87 % [9]. Most delayed hernias are right-sided, because on the left side no viscera protect the diaphragm [4]. In addition, the liver can cover the eruption in the diaphragm preventing herniation [4-6, 8].

Complaints suggestive for the diagnosis of a diaphragmatic hernia are most commonly respiratory distress and intermittent postprandial pain [5]. The intermittent character of complaints can be explained by difference in pressure between the intrathoracic space and the abdomen. Increase in abdominal pressure could result in a more intrathoracic position of abdominal viscera [5]. There is a possibility of strangulation of these abdominal organs, with the possibility of causing bowel obstruction, presenting as more continuous pain and blood loss with defecation [5, 10].

The management of posttraumatic diaphragmatic hernia is primary surgical [8]. Right-sided ruptures necessitate a transthoracic approach because of the possibility of intra-abdominal adhesions and fibrosis after trauma. Additionally, the position of the liver impede a transabdominal approach [6]. If there is a possibility of visceral lesions, or the hernia is left-sided, diaphragmatic ruptures are usually approached through the abdomen [4, 8]. However, the best surgical method is not yet determined. We prefer a thoracoscopic approach for herniation on both sides as the increased thoracoscopic pressure is beneficial for the reduction of organs to the abdomen. In addition, the condition of the replaced organs can be monitored closely.

It is important to ask for a detailed medical history in children with intermittent or postprandial pain or mild dyspnea together with thoracic pain to find the right diagnosis. Physicians must be aware of the possibility of diaphragmatic rupture after penetrating or blunt trauma, even when trauma happened a long time ago. Treatment is surgical with reposition of the abdominal organs beneath the diaphragm.

A written consent for publication was obtained from the parent and the patient.

The authors report no conflicts of interest. All authors attest that they meet the current ICMJE criteria for Authorship.