Angioleiomyoma in the Facies Inferior Linguae: A Rare Case and a Literature Review

Angioleiomyoma rarely occurs in the oral cavity, and it is extremely rare for this tumor to occur in the facies inferior linguae. We describe an exceptional angioleiomyoma that presented in the right facies inferior linguae in an obese 51-year-old female with hepatopathy. MRI showed high signal on T2-weighted image and the clear visualization of muscle and iso-signal on T1-weighted image. We excised the tumor under general anesthesia as the clinical diagnosis of benign tongue tumor. The tumor was covered by a capsule, and the split surface was yellowish white. Hematoxylin-eosin staining revealed that the wide, spindle-shaped cells with eosinophilic cytoplasm had a bundle-like and complex array, and slit-like blood vessels with branching were scattered. The smooth muscle of the blood vessel wall was observed to have grown. Immunohistochemical staining was positive for αSMA, HHF-35 and caldesmon, somewhat positive for desmin, and negative for CD31, CD34, S100 and Ki-67. The tumor was finally diagnosed as angioleiomyoma. We review the literature’s case reports of angioleiomyoma of the tongue. Chronic estrogen metabolism abnormality due to liver dysfunction may have been the cause of this tumor. This case suggests that MRI imaging and an immunohistochemical analysis are useful for the diagnosis of this tumor.

Leiomyoma is a non-epithelial benign neoplasm originating from smooth muscle that frequently occurs in the uterus, gastrointestinal tract, or skin, but is rare in the oral region, where the smooth muscle tissue is poor. The first oral leiomyoma was reported by Blanc in 1884 [1], and most of the cases reported to date are angioleiomyomas (ALs). ALs are scattered on the palate, buccal mucosa and lips, and they are rarely reported on the tongue [2]. When an AL occurs on the tongue, it is often found in the lingual margin, with few reports of it occurring in the facies inferior linguae. In terms of clinical symptoms, it is very difficult to differentiate AL from other mesenchymal tumors; the diagnosis is based mainly on the findings of a histopathological examination. We report a case of AL in the facies inferior linguae, and we provide a review of the relevant literature including their clinical and immunohistochemical features.

A 51-year-old Japanese female was referred to Kanazawa University Hospital’s Department of Oral and Maxillofacial Surgery for the evaluation of a solitary mass in her right facies inferior linguae (Figure 1).

Figure 1:  Preoperative appearance of the lesion showing diffuse swelling in the facies inferior linguae of the tongue. The overlying mucosal surface of the mass was normal.

She had been aware of a mass for 4 years, but had not experienced any symptoms. She was not taking any medication and did not smoke or consume alcohol. Her physique was somewhat obese, and she had been shown to have hepatopathy and had high AST, ALT, and γGTP levels on blood examination. During the clinical examination, we observed a mobile, well-circumscribed, indolent and palpable hard-elastic mass measuring approx. 1.0 ´ 1.0 cm in the right facies inferior linguae. The covering mucosa was normal. Contrast-enhanced MRI showed a 10-mm-dia. mass inside the right facies inferior linguae, and the T2-weighted image showed a high signal intensity. The T1-weighted image revealed a clear bordered mass that showed a signal equal to muscle (Figure 2). 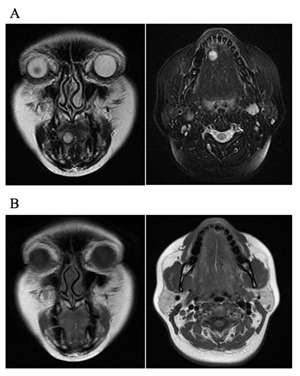 The clinical diagnosis was a benign tumor in the facies inferior linguae, and an excisional biopsy was performed under general anesthesia. An incision was made in the mucous membrane just above the lesion, and a mass covered by a capsule was confirmed (Figure 3). 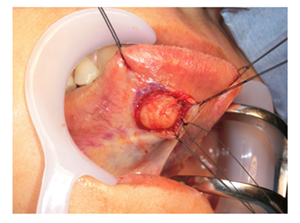 After blunt dissection, no adhesion with surrounding tissues was observed, and the lesion was easily dissected. The lesion was excised as a mass. As a result of the pathological diagnosis during the surgery, malignant findings were not recognized because the tumor consisted mainly of spindle-shaped cells. The tumor was solid, and the cut surface was yellowish white (Figure 4).

Hematoxvlin-eosin (H-E) staining revealed that the spindle-shaped cells with eosinophilic cytoplasm and a wide width had a bundle-like and complex array, and slit-like blood vessels with branching were scattered. In addition, the smooth muscle of the blood vessel wall was observed to have grown. Immunohistochemical staining was positive for αSMA, HHF-35 and caldesmon, somewhat positive for desmin, and negative for CD31, CD34, S100; the Ki-67 positive rate was <5%. Based on these histopathological findings, the tumor was finally diagnosed as AL.

AL is a benign neoplasm composed mainly of a proliferation of smooth muscle cells in blood vessels, circumvallate papillae and heterotopic smooth muscle, and it presents as a well-defined elastic hard mass. Hachisuga et al. examined 562 cases of AL and reported that most of the cases (60%–70%) occurred in the lower limbs, especially in the venules of the lower leg. The upper limbs accounted for 22% and the trunk for 3%, and the occurrence of this tumor in the oral region — where smooth muscle tissues were scarcely observed except in the vessel wall — was only 2.7% [3]. Brooks et al. reported that the incidence of AL in the oral region was only 0.065%, and the most frequent site of development was the lip (48.6%), followed by the palate (21.1%), buccal mucosa (9.2%), and tongue (9.2%); and the tongue is a rare development site in the oral region [2]. Moreover, in the cases reported so far, the tumors were more likely to occur in the lingual apex and the lingual margin, and we found only one case that occurred in the facies inferior linguae [4], indicating that this site is extremely rare.

ALs generally occur between the third and fifth decades of life and are said to be more common in females [5]. In the reported cases of AL in the oral region, although the age of onset ranges from 1 month to 84 years old, the incidence is generally high in between fourth and sixth decades of life [6]. Unlike the extraoral localization, intraoral AL has a slight predilection for males as reported by several authors, with a male-to-female ratio of 1.95:1 [7]/ As shown in Table 1, ALs of the tongue were found in a wide age range (from 12 months to 51 years old), and most of the patients were males.?Similar to the report by Brooks et al. [2], our present patient differed from the typical case of AL of the tongue as the lesion occurred in a middle-aged female.

Table 1: Clinicopathological features of the present and reported cases of AL in the tongue.

As subjective symptoms of AL, spontaneous pain and tenderness have often been observed in the limbs, but the pain was rarely observed in the oral region. It was reported that a small proportion of individuals with oral ALs (7.8%) were aware of the pain [8], but the present case was not painful. In addition, since this tumor has few subjective symptoms and shows a gradual increases in size, the duration of symptoms is relatively long (often from several years to 14 years in the oral AL cases reported to date) [9, 10], the maximum reported size was 5 ´ 8 cm [11], but among only the tongue cases, 3.5 ´ 3.5 cm was the largest lesion, and our patient’s lesion was the smallest. We speculate that her lesion could be excised at a small state because the duration of symptoms was relatively short.

The suspected causes of AL are thought to be standing for a long period, hepatic dysfunction, venous congestion due to high estrogen levels, smoking, and mechanical irritation, but no clear cause is known. In our patient’s case, the AL occurred on the lower surface of the tongue where it was unlikely to receive mechanical stimulation; she had no smoking habit, and blood tests showed high levels of AST, ALT, and GTP. In addition, liver dysfunction was observed for >10 years. In light of these findings, we speculate that a chronic estrogen metabolism abnormality due to the patient’s liver dysfunction was the cause of this AL.

It is difficult to distinguish ALs from hemangiomas, fibrous tumors, lipomas, and schwannomas by clinical findings. Imaging examinations have not been useful for pre-operative diagnosis. Liu et al. reported that enhanced computed tomography (ECT) and Doppler ultrasonography were not useful for the diagnostic imaging examination of AL [15]. On the other hand, with magnetic resonance imaging (MRI), ALs show a high signal on T2-weighted images, and thus fibrous nodules with low signal intensity on T1- and T2-weighted images or lipomas with high signal intensity on T1-weighted images can be distinguished [17]. Therefore, in our patient’s case, the differential diagnosis was possible to some extent by MRI.

However, it is not possible to make a definitive diagnosis by an image diagnosis alone, and eventually a histological diagnosis (especially an immunohistochemical analysis) provides a definitive diagnosis. In previous reports, the staining of αSMA, desmin, CD34, and S-100 protein was very useful as an aid in the histopathological diagnosis of AL [16, 18]. It is important to differentiate AL from other types of spindle cell tumors including leiomyoma (CD34− and S-100−), myofibroma (desmin−, CD34− and S-100−/+) and myopericytoma (desmin–, CD34– and S-100–) [18]. Moreover, it is particularly important to distinguish AL from malignant mesenchymal tumors [19].

ALs are composed mainly of mature smooth muscle cells, whereas leiomyosarcomas are composed mainly of undifferentiated mesenchymal cells or fibroblast-like cells and myofibroblast-like cells [20]. Benign and malignant smooth muscle tumors can be distinguished by confirming the proliferative activity [21]. In our patient’s case, αSMA, a smooth muscle cell cytoskeletal protein, i.e., HHF-35 (which is a marker of muscle differentiation), and caldesmon (which is involved in smooth muscle contraction) were positive; desmin, (a type of intermediate filament and a myocyte cytoskeletal protein) was focally positive, and S-100 and CD34 were negative. These immunostainings excluded schwannoma and fibrous tumor. Our patient’s Ki-67 rate (showing cell-proliferative activity) was <1.5%, and malignant tumors were excluded, leading to the diagnosis of AL.

In accord with the literature, surgical resection along the tumor capsule is the most effective treatment for ALs in the head and neck regions [3, 22, 23]. In the present case as well, complete resection including the tumor capsule was possible. A recurrence of AL caused primarily by incomplete resection of the lesion has been reported in several cases [24-28]. The sites of recurrence were on the outer skin of the nose and the larynx, and the recurrence after resection was observed in the shortest period of 1 year and the longest period of 8 years. Therefore, strict follow-up is necessary in future cases.

We have reported a rare case of AL in the facies inferior linguae. Although the clinical findings of this case were not sufficient to make the correct diagnosis, MRI imaging findings and detailed histopathological analysis provided the means to identify the lesion entity.

We would like to thank Dr. Hiroko Ikeda for providing pathological information and images.

There are no conflicts of interest to declare