Appendicitis: How It has Changed Over the Last Few Decades

2Professor in the Department of Surgery, Chief of the Division of Pediatric Surgery, UT Southwestern Medical Center, Dallas, Texas, USA

For as long as medicine has been around, appendicitis has been considered to be caused by a fecalith obstructing the appendiceal lumen. However, over the years it has come to be noticed by us that a fecalith was not always present and eventually were able to document that it was present in approximately 50% of patients [1]. In the other patients, appendicitis was secondary to appendiceal lymphoid hyperplasia leading to ischemic necrosis of the appendix, especially the appendiceal tip, and subsequent purulent appendicitis [1]. Our first encounter with this type of appendicitis was in a case where the imaging findings were not clearly those of purulent appendicitis but the patient had enough concerning clinical findings to be taken to surgery and Dr. Dai Chung, the surgeon at that time, obtained a photograph of the appendix and came to me and said “Look - this is what we call a pink appendix” (Figure 1). The appendix was grossly swollen, but the serosa was intact. However, it was markedly injected. There was no purulent exudate and no purple (ischemic/vascular) insult to the appendix. In addition, the head of the appendix was slightly enlarged and prominent. We did not notice this finding initially but now have come to realize that it is commonly seen with the pink appendix, and is dealt with later. At that time, we did not know what we were looking at but as it turned out we were looking at an enlarged, inflamed appendix secondary to viral induced lymphoid hyperplasia. This should not have been surprising for the normal appendix has lymphoid tissue in its makeup and for the most part behaves as do lymph nodes throughout the body. In other words it responds to infection, including viral infection and the reactive hyperplastic lymphoid tissue results in a swollen appendix, the “pink appendix” of viral appendicitis. 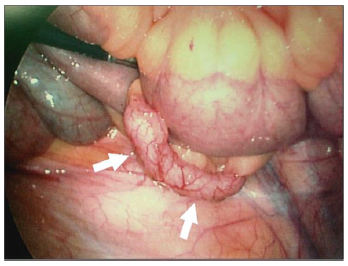 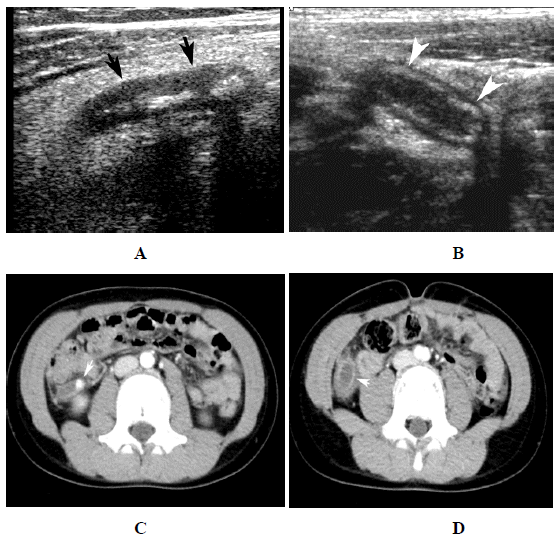 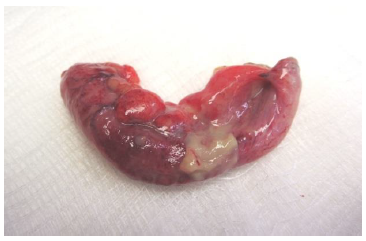 Figure 4: Purulent appendicitis: gross specimen. Note the swollen appendix with exudate over the surface of its midpoint. It is dark red and somewhat purple. All of this reflects hemorrhage and purulent exudate in a grossly inflamed appendix.

In terms of the gross and micro pathology of the pink appendix, it is swollen and circumferentially round. It does not have any serosal bleeding, necrosis, or exudate and in very mild forms the wall is nearly white while with more pronounced involvement it becomes variably pink from serosal vascular injection (Figure 5A and B). It is the serosal vascular injection which leads to the appendix being pink and for the most part these appendices do not need to be removed. On gross histologic examination, they demonstrate lymphoid tissue in the form of a variably thick peripheral intra-appendiceal purple ring (Figure 5C). These appendices usually measures up to 6mm in diameter and it is at this point that the appendix becomes full of lymphoid tissue (Figure 6A) and squeezes the appendiceal lumen to a fine line on ultrasonic graphic longitudinal imaging and a small central dot on cross-sectional imaging (Figure 6B and C). The ultrasound spectrum of findings from the normal appendix to an early pink appendix and then a full blown pink appendix is demonstrated in (Figure 6D).

Figure 5: Pink appendix: gross specimens. A. Note the relatively thin and mild pink appendix. It is almost white but slightly pink. B. A more advanced case demonstrates more pronounced serosal vascular congestion and mild prominence of the appendiceal tip but no signs of hemorrhage, necrosis, or exudate. C. Low powered cross section of pink appendix. Note the inner purple layer which consists of lymphoid tissue. The round intact germinal centers are readily visualized. 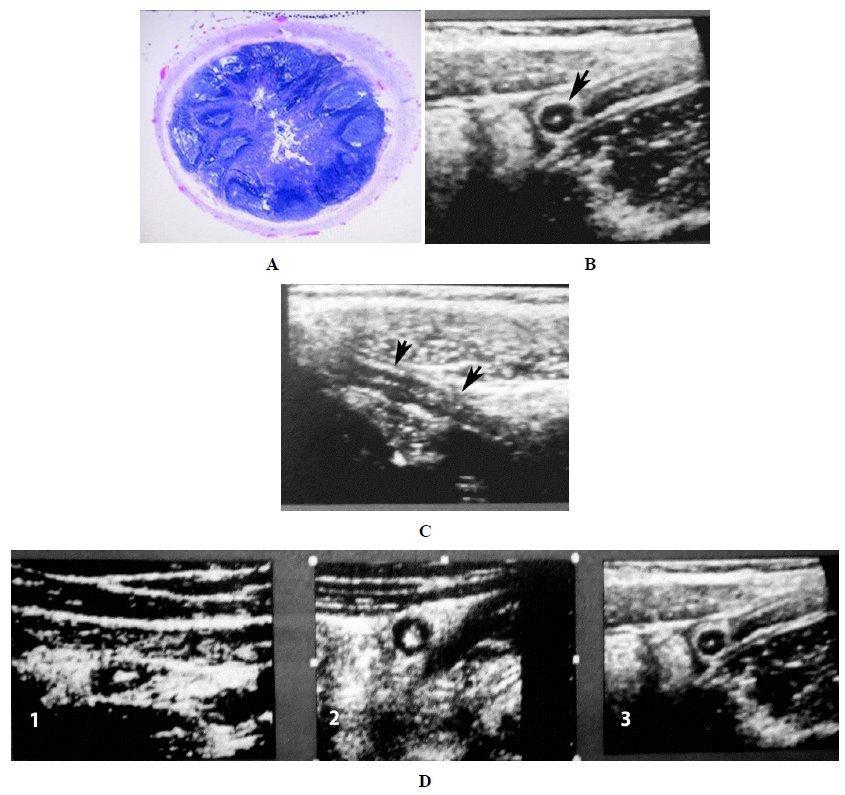 Figure 6: Pink appendix: Uncomplicated. A. Cross-section of a pink appendix shows vascular congestion of the serosal surface and numerous lymphocytic germinal centers filling the lumen of the appendix. There is no hemorrhage. B. Ultrasound cross section. Note the hypodense round appendix (arrows) with a central white dot representing the compressed lumen. There is no edema around the appendix. C. Same patient, longitudinal view demonstrated the same hypodense appendix (arrows) with a central irregular line running through it, again the compressed lumen. D. Sequence of normal to pink appendix: [1] Normal appendix is oval and measures no more than 4mm in diameter. The echogenic lumen is oval. [2] Early lymphoid hyperplasia makes the appendix more round. The lumen is still sizable but becoming round [3]. Full stage pink appendix shows lymphoid tissue filling the appendix with a central echogenic dot representing the compressed lumen. Figure 6B and D reproduced with permission from reference article number 14.

On CT examination, the pink appendix also is round and shows a slightly thickened/hyperintense wall (Figure 7). The center is hypodense and lucent and at first, this hypodense center was thought to be fluid but once we became familiar with the ultrasound findings it was clear that the hypodense center represented lymphoid tissue. This is not a surprise as lymphoid tissue is predominantly fluid and these appendices generally do not need to be removed. However, they can go on to purulent appendicitis and this problem is not rare. Purulent appendicitis can develop in the mid appendix but most often is the tip that is involved. In these patients, in the early stages the tip of the pink appendix is variably swollen and fuzzy because there is now more inflammation present (Figure 8). The diameter is more than 6 mm and all of this occurs because of compromised blood flow to the tip of the appendix which in terms of blood supply is most vulnerable. What happens in these cases is that as the lymphoid tissue fills the appendix the constricting serosa leads to a “compartment syndrome” which then squeezes the blood vessels and causes decreased flow. Since the tip is most vulnerable, it is usually the first part of the appendix to suffer from this problem. 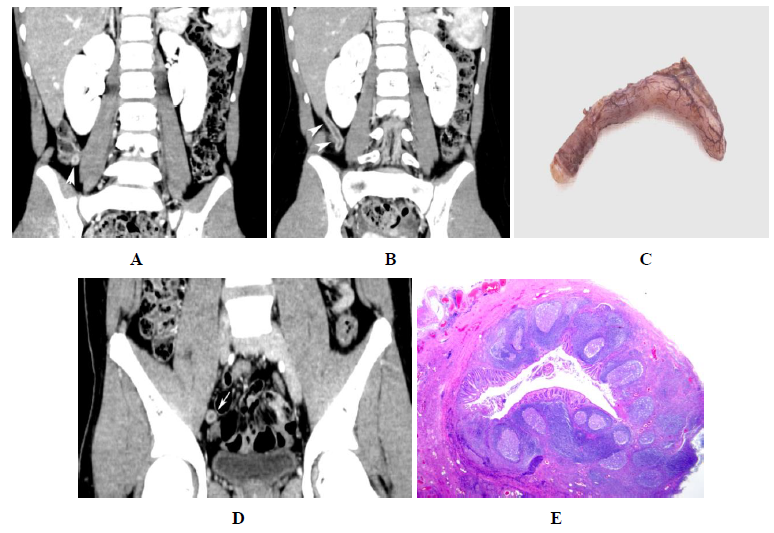 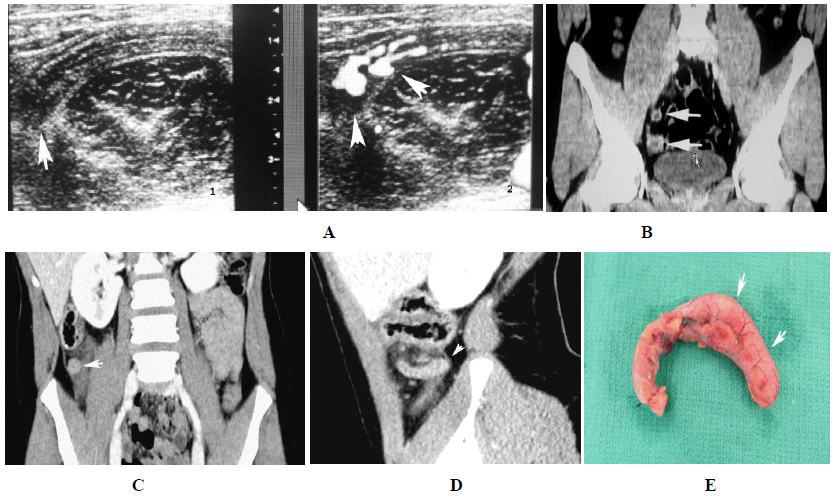 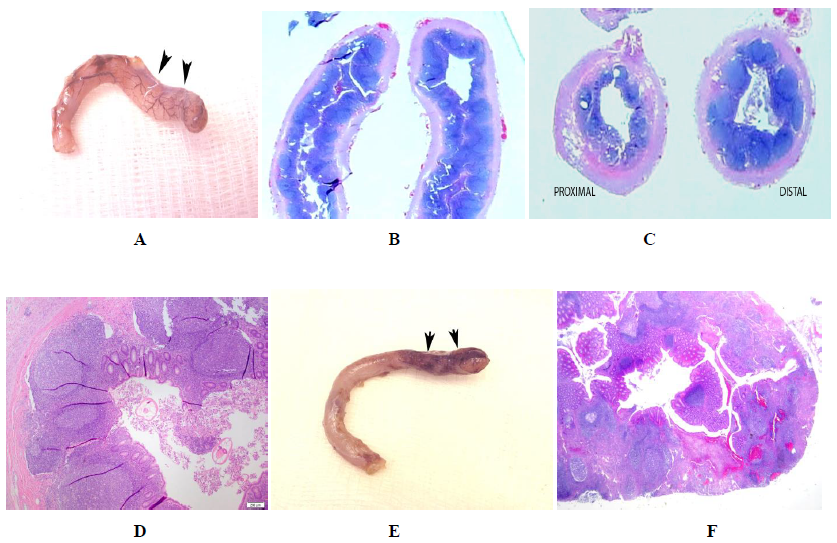 Figure 9: Pink appendix with purulent tip: Histologic features. A. Note that the tip of this pink appendix is swollen (arrows) B. Longitudinal gross pathologic slide of the appendiceal tip demonstrates an abundance of lymphoid tissue with relatively intact germinal centers. C. Same patient. Proximally [proximal] there is very little lymphoid tissue. Distally distal through the swollen part of the appendix there is abundant lymphoid tissue. D. Microscopic evaluation of the same patient demonstrates a number of germinal centers which are still relatively intact but beginning to disorganize. E. Another appendix with a definite purulent tip (arrows). Note that the remainder of the appendix is a normal pink appendix. F. Low power microscopic examination of the tip demonstrates disorganized, destroyed germinal centers and hemorrhage.

Finally, there are those cases where a fecalith is present along with lymphoid hyperplasia. What happens in these cases is that the fecalith likely has been there for months or maybe years and then all of the sudden lymphoid hyperplasia arrives on the scene and forms a collar around the fecalith. There does not have to be a lot of lymphoid tissue to form an obstructing collar. This then totally occludes the appendiceal lumen and purulent appendicitis results (Figure 10). 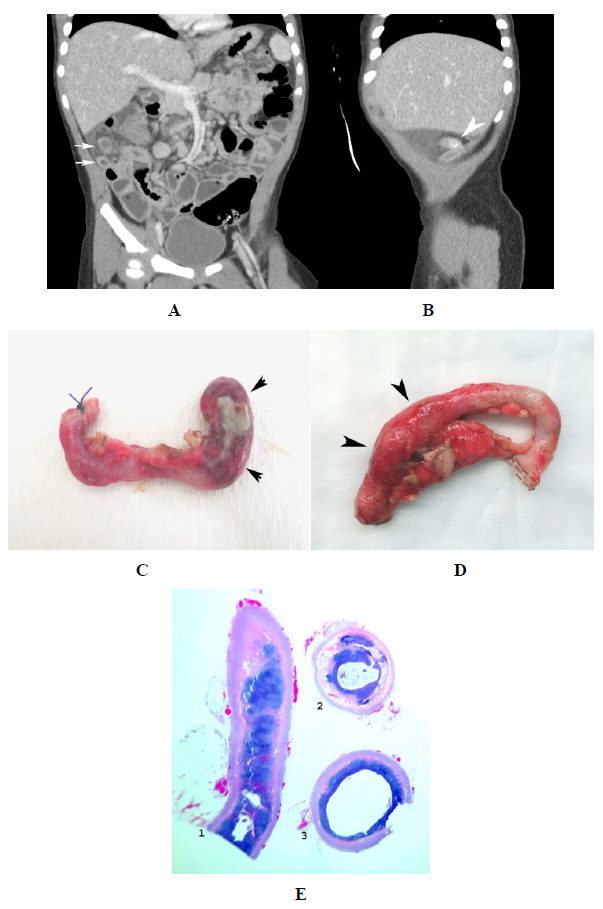 Figure 10: Pink appendix with fecalith. A. Note that the tip of the appendix (upper arrow) is swollen, indistinct and has surrounding edema. The lower arrow points to the more proximal appendix which looks more like a normal pink appendix. B. Same patient demonstrating a fecalith (arrow) in the middle of the appendix. C. Gross appendiceal study demonstrates the tip of the appendix (arrows) which was distal to the location of the fecalith to show typical purulent appendicitis with exudate. D. Another patient with similar findings on gross histologic examination of the appendix. The distal half is swollen (arrow heads) and the proximal half appears more like a normal pink appendix. E. Gross pathology: [1] longitudinal section through the appendiceal tip demonstrates serosal injection, abundance of lymphoid tissue with destruction and disorganization of the germinal centers and hemorrhage [2]. Proximal appendix. Note that there is very little lymphoid tissue [3]. Center of the appendix where the fecalith was present. Note the thin collar of purple lymhiod tissue. It is this collar which surrounded the fecalith and led to appendiceal lumen obstruction.

In summary, if the pink appendix measures 6mm or less and has a clear sharp edge it most likely will settle down and not need removal. However, once this appendix measures more than 6 mm and the edge of the appendix becomes fuzzy one needs to consider possible surgery and obtain a surgical consultation. The reason for this is while some if these patients may have their symptoms regress and recover spontaneously, others will go on to purulent appendicitis of the tip.

None of the authors have anything to claim.