Are We Treating Our Patients Right? A Case of Disseminated Herpes Zoster

Varicella-zoster virus infection is a common health problem worldwide, especially affecting the elderly and is responsible for great morbidity. We expose the clinical case of an 89 year old woman who was diagnosed with herpes zoster infection but was only treated with painkillers. The patient was admitted to the hospital, with severe neuropathic pain and a disseminated rash. Though antiviral therapy was started, the patient clinical status was complicated with encephalitis. With this clinical case we wish to emphasize the importance of clinical recognition of herpes zoster infection in order to promptly start antiviral treatment. We also want to enlighten the role of herpes zoster vaccination to reduce the health complications associated to the disease.

Varicella-zoster virus is responsible for two different diseases: varicella, a primary infection characterised by a centripetus vesicular rash, common in children; and herpes zoster, also known as shingles, which results from reactivation of latent virus in sensory ganglia, characterised by a painful vesicular rash, which follows one or several dermatomal distribution areas. Herpes zoster is a common infection in the elderly and immunocompromised patients. A quarter of the population is at risk of developing herpes zoster during their lifetime, and two thirds of people with the disease are aged 50 years or older. The most frequent complication is post-herpetic neuralgia, which may last for months or years, and, rarely, it can be associated to polyneuropathy, encephalopathy/ aseptic meningitis (the latter, with great morbidity and mortality) [1-5].

The authors report the case of an independent 89-year old woman with history of treated Hodgkin lymphoma (in remission since 2000), hypertension, dyslipidaemia and obesity, who was admitted to the Emergency Department (ED) with severe pain on the left abdominal quadrants. In addition, she described a vesicular rash that in a 7-day period had rapidly spread throughout the entire abdomen, pubic area and thighs. The patient had previously sought medical care, having received supportive treatment with painkillers (Table 1). On examination, she was alert, haemodynamically stable, febrile (38.5ºC) and showed a generalised vesicular rash, which spared the oral/genital mucosae, as well as the palms and soles. Some lesions were already in crust on the upper torso, head and limbs (Figure 1 and 2). 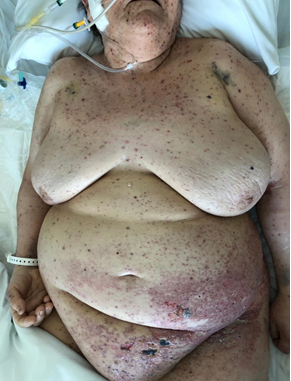 Figure 1: Showed a generalised vesicular rash, which spared the oral/genital mucosae, as well as the palms and soles. 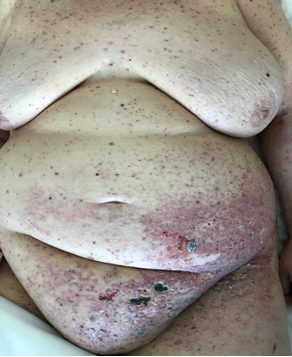 Figure 2: Lesions were already in crust on the upper torso, head and limbs.

A diagnosis of disseminated Herpes Zoster infection was made (later confirmed by detection of the viral DNA on the vesicular fluid by polymerase chain reaction) and the patient was started on intravenous acyclovir. During the first days of treatment, the patient’s status deteriorated, and she became obnubilated, didn’t follow commands, had diminished blink to threat reflex on the right side and had positive babinsky sign bilaterally. A brain computed tomography was performed without any relevant findings; in addition, she performed an electroencephalogram, which was suggestive of moderate-to-severe encephalopathy. Although a lumbar puncture was not performed due to the high risk of microbial dissemination, a presumptive diagnosis of Herpes Zoster encephalitis was established, and the patient was treated with pulses of methylprednisolone, however without clinical improvement. The patient eventually died of sepsis with multiple organ failure.

This case is extremely relevant as it describes a rare complication of herpes zoster infection: meningoencephalitis is estimated to occur in only 0.1 to 0.2% of infected patients and is associated with high morbidity and mortality. In addition, this report reiterates the role of antiviral therapy, which may have a decisive role in the clinical course of the disease and should be offered to every patient in the first 72 hours of disease or if the rash is progressing. Our patient started acyclovir only seven days after the first symptoms, probably at a stage where viral replication was very high. Finally, the authors would like to emphasize the role of vaccination against HZV, especially in the elderly community, to prevent the occurrence/recurrence of this infection and its more severe manifestations.

There are currently two vaccines available against herpes zoster infection. One – Zostavax® – is a live attenuated (ZVL), monovalent vaccine that is given in one dosis and has a 5 year effectiveness. Shingrix®, a recombinant vaccine (RZV), is the other option. It is administered in two dosis 2 to 6 months apart. Altough both options are effective, the TZV is the preferred one, since it has greater efficacy as well as an extended protection (four to nine years). Both vaccines are safe and generally well tolerated with myalgia, fatigue and fever being the most frequent side effects. The route of administration is subcutaneous; nevertheless intramuscular route is safe and effective. A previus episode of herpes zoster infection is not a contraindication to vaccination but it should have a one year gap period. ZVL is contraindicated in immunosuppressed patients for it is a live attenuated vaccine (e.g. patients under chemotherapy or immunosuppressive agents).

The Centres for Disease Control and Prevention recommends public vaccination to every immunocompetent adults above 50 years old whereas in Europe no general guidelines have been adopted. The introduction and implementation of universal vaccination in many European countries and other parts of the world have had a significant impact on incidence, hospitalizations and mortality rates, demonstrating the effectiveness of this strategy.