Multiple myeloma is characterized by a malignant proliferation of bone marrow plasma cells leading to the production of monoclonal paraproteins in the blood and urine. This pathology occurs more often in men with an average of 65 years old and very rarely in younger patients. We present here a case of a 26 years-old male diagnosed with multiple myeloma. He presented with acute renal impairment (DRA) as the first sign of multiple myeloma. Laboratory data showed the presence of monoclonal proliferation of immunoglobulins with increased serum level of light chains and 34% presence of plasma cells in myelograms. Renal biopsy confirmed the diagnosis of acute renal injury from light chain deposition. The patient started treatment with chemotherapy and immunosuppression that was accompanied by clinical improvement and stabilization of renal function. By presenting this clinical case, we want to show that multiple myeloma can be the cause of acute alteration of renal function in a very young patient.

Multiple myeloma is a hematologic neoplasm originating from plasma cells that are normal bone marrow populations. Plasma cells are part of the white blood cells that build the immune system. Under normal conditions plasma cells produce various antibodies that fight infections while in myeloma, plasma cells proliferate and produce increased amounts of of a specific antibody known as paraprotein that has no function. Multiple myeloma is the second most common cause of hematologic neoplasms after lymphoma [1]. The incidence of multiple myeloma is 5: 100 000. The average age of diagnosis is approximately 65-70 years and only 37% of patients diagnosed are under 65 years [2]. Multiple myeloma is a very rare pathology in individuals under 30 years of age and only a few cases have been described in the literature [3]. Since the incidence of multiple myeloma is very low under 30 years (0.3%) [4], the characteristics and prognosis of these patients are not very well known and the literature review is based only in the clinical presentation of cases or in studies with limited number of patients.

What causes multiple myeloma are still unknown but it is thought to be a combination of genetic and environmental factors. The physiopathology of renal damage in multiple myeloma is heterogeneous however in most cases it is associated with immunoglobulins, and especially with the deposition of light strands giving various damage to the kidneys, but mainly tubule-intersticial type [5]. In total 20% of patients with multiple myeloma have renal involvement at the time of diagnosis and 40% will develop renal disease during the course of pathology. Rarelly in literature are described cases of patients with multiple myeloma in the third decade of life and accompanied by renal involvement.

A 26 years-old young male, presented in the internal medicine emergency of the ‘’Mother Teresa University Hospital Center ". After a detailed medical history was taken, his complaints were: low back pain for two months, weight loss, vomiting, chest and abdominal pain, several days of temperature with the highest value measured 38.9ºC without a history of previous illnesses. The patient referred for physical exhaustion 5 days ago. The patient was nonsmoker, non-alcoholic. In the physical examination the patient presented normal vital signs, body temperature 38.2ºC and blood pressure values 160/70 mmHg. The skin and mucous membranes were pale. The respiratory examination showed broncho-vesicular respiration. The patient was hospitalized in the Nephrology Service for acute impairment of renal function. Routine investigations revealed normal blood counts, Table 1 showes the results of biochemical examinations.

Proteinuria was 2.5 g% in the 24-hour urine examination in 1.7 L volume. In the ultrasound examination the urinary tract was normal. Both kidneys with normal position, regular contours and dimensions 12.2 × 4.8 × 1.7 cm, clear cortico-medullary differentiation, without hydronephrosis or calcifications. The patient began treatment with IV fluids and antibiotic therapy due to dehydration and temperature persistence. For the time being, the absence of a response to therapy, induced further examinations. Radiological examination of the cranium revealed the presence of focal lesions in the frontal and occipital part (Figure 1) and also CT scan thoraco-abdominal confirmed osteolytic lesions throughout the osteoarticular system. Protein immunoelectrophoresis revealed a monoclonal peak of light chains, serum immunoglobulin values are presented in Table 2 and in the myelogram examination the presence in 34% of plasma cells was observed. 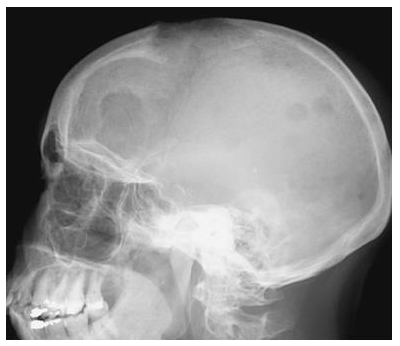 Figure 1: Osteolytic lesions of the cranium.

The patient was completed with percutaneous renal biopsy which confirmed myeloma cast nephropathy (MCN). Examination with the light optical microscope showed the presence in eosinophil tubes surrounded by mononuclear cells and in immunofluorescence showed amplification of the staining of kappa and lambda strings on the tubular basement membrane. The patient was diagnosed with multiple myeloma with light chain and cast myeloma nephropathy and was transferred in the Hematology Service to start chemotherapy treatment. The patient had a very good outcome to chemotherapy and renal function values began to normalize in the fourth cycle of treatment without the need to initiate renal replacement therapy. In the follow up, 2 months later, the patient resulted with serum creatinine 1.3 mg/dl and eGFR: 89 ml/min.

Multiple myeloma is a monoclonal proliferation of plasma cells and is most often presented with hypercalcemia, anemia, altered renal function and bone lesions, characteristics that have diagnostic value for multiple myeloma [7, 8]. This pathology most often affects men with an average of 65 years old [9, 10] and only in 2% of cases patients under 40 years. Rare cases of multiple myeloma diagnosed in patients in the third decade of life are described in the literature [11, 12]. The clinical case presented in this study is a 26-year-old boy who presents for the first time in an emergency with vomiting, fever for several days, anorexia, weight loss and decreased renal function in routine biochemical examinations. Based on the imaging data of the urinary tract and the evaluation of renal function performed 9 months ago (urea 25 mg / dl and creatinine 0.8 mg / dl) the patient was hospitalized for acute renal function impairment of unclear nature. Differential diagnosis of DRA due to prerenal and postrenal causes was also important to evaluate in this patient. Prerenal causes were ruled out based on the patient's euvolemic status, vital signs, and biochemical examinations performed. Also, the absence of obstruction or hydronephrosis on urinary tract ultrasound ruled out a postrenal cause of decreased renal function, in this circumstance the presence of a renal pathology was assumed as a cause of DVR. The diagnosis of multiple myeloma was challenging, despite the presence of anemia, hypercalcemia, lumbar pain and alteration of renal function, because on the other hand the lack of increased serum protein levels and albumin and the young age of the patient. Differential diagnoses were considered: tubular injury from the use of nonsteroidal anti-inflammatory drugs and antibiotics as well as rhabdomyolysis due to referral by the patient for physical exertion before hospitalization. However, creatinine kinase limit values ruled out the diagnosis of rhabdomyolysis. In this patient a thoraco-abdominal CT scan was performed to rule out a concomitant malignant pathology. The presence of osteolytic lesions on CT, the increase in the level of kappa and lambda strings on immune-electrophoresis as well as the presence in 34% of plasma cells on myelograms further confirmed the diagnosis of multiple myeloma with light strings associated with MCN due to acute renal damage in this patient.

This case presentation is important because it shows that although the diagnosis of multiple myeloma at a young age is very rare, we should keep a high level of clinical suspicion, in any patient presented with acute alteration of renal function of unknown etiology. Protein immune-electrophoresis should be in the diagnostic protocols of patients with DRA accompanied by other diagnostic tests necessary for the diagnosis of multiple myeloma.

Acute renal impairment is a complication of multiple myeloma and in any patient regardless of age, the diagnosis of multiple myeloma should be considered as a possible etiological cause when medical history, physical examination, laboratory testing and radiologic exams are in favor of the diagnosis. Timely diagnosis and immediate initiation of therapy is very important in order to treat and improve the survival of these patients with poor prognosis. Studies have not shown a difference in survival rates related to patient’s age at the time of diagnosis of the disease; however patients at a younger age have less treatment-related morbidity and consequently have a better outlook and survival rates.