Calcaneal inferior spurs are bony outgrowth that can arise from multiple sites. Compressive and traction forces are theorized to be the etiology behind their genesis. Blunt trauma to the plantar aspect of the foot can lead to calcaneal inferior spur fracture. We present a case of a 38-years-old male presenting inability to bear weight on his left foot with point tenderness after falling from a 3-meters height. Radiographic examination revealed fracture of calcaneal inferior spur, from which the patient was conservatively treated successfully. Fracture inferior calcaneal spur is a rare cause of heel pain. The reviewed literature showed how both conservative and surgical managements are used, the former more frequently.

The calcaneus is the largest tarsal bone in the foot, where it handles weight-bearing when in an upright position. It contains six surfaces through which articulation with the talus and cuboid bones is provided along with multiple ligamentous and muscles attachments [1]. This sentinel position of the calcaneus makes it vulnerable to different kinds of pathologies: arthritic, neurologic, systemic, and most importantly traumatic [2].

Calcaneal bone spurs, or enthesophytes, are bony outgrowths that arise from the calcaneal tuberosity in relation to the attachment of the Achilles tendon and/or plantar fascia. Although the pathophysiology is poorly understood, studies in the literature postulate a positive relationship to increasing age, athletic activity, obesity, and osteoarthritis as well as possible genetic control [3, 4]. Association of calcaneal spurs to heel pain is a point of debate: Menz et al. [5] observe 4.6 times increased likelihood to find a calcaneal spur when a patient presents with heel pain. On the other hand, Osborne et al. [6] report 46% of the asymptomatic population to have calcaneal spurs.

We report a 38 years old male who presented to our emergency department after falling from 3-meters height and landed on his feet. He also reported hitting his head after landing. He complained of a scalp laceration, a painful left heel, and an inability to bear weight on it. On physical examination, there was point tenderness at the plantar aspect of the calcaneum without superficial changes of inflammation. Range of motion, as well as neurovascular assessment, were preserved. The patient's past medical history was only positive for diabetes mellitus which was controlled with Metformin. The scalp laceration was managed by glue after being cleaned, and a lateral radiograph of the ankle joint was performed. It showed a mildly displaced fracture of an inferior calcaneal spur (Figure 1). This initial radiograph was reported as normal. Hence, the orthopaedic surgeon applied a back slap and discharged the patient on non-steroidal anti-inflammatory drugs and no weight-bearing instructions, with a follow-up appointment at the outpatient clinic in two weeks.

After two weeks, the patient had another lateral radiograph of the ankle that showed similar findings to the previous radiograph (Figure 2). As the patient denied tenderness or significant impact on his activity, the decision to continue conservative management was mutually agreed upon. 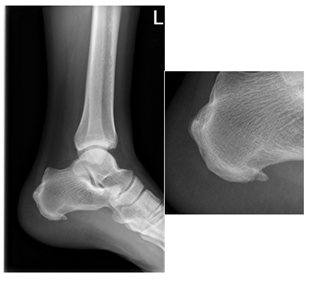 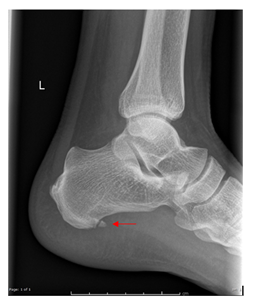 Calcaneal inferior spurs are an entity that is commonly seen in the population. They most commonly arise from the medial aspect of the plantar calcaneal tuberosity. Abreu et al. report that inferior spurs arise from insertions sites of the abductor digiti minimi, flexor digitorum brevis; between these muscles and the plantar fascia; or within the plantar fascia itself (least common) [7]. Although relation to these muscles’ insertions might suggest traction forces to be the culprit, multiple studies have downplayed the rule of traction. Instead, compressive forces admixed with above mentioned positively associated factors are thought to be the main pathophysiology of inferior spurs [8].

Fracture of inferior spurs is a rare cause of heel pain. Few case reports of similar presentation [2, 9-13] are present in the available English language literature. While reviewing these reports, a common theme of blunt trauma applied to the sole (slipping and landing on feet, fall from height, sudden forceful stomping of the foot while attempting to run) can be postulated to be the main factor. As for management, only Subasi et al. [13] have approached their case surgically and excised the fractured spur. The remaining reports, as well as our case, adopted a conservative approach that included: short casts, reduction of physical activity and weight-bearing, employing RICE (rest, ice, compression, and elevation) therapy, and non-steroidal anti-inflammatory drugs. Additionally, others [2, 9] have added local steroid and plasma injections, and extracorporeal shock wave therapy to their management. The importance of such fracture rises from how easily it can be missed as a cause of manageable heel pain such as in our case. Careful assessment of calcaneal spurs in patients presenting with heel pain after blunt trauma to the plantar aspect of the foot will ensure prompt identification, management, and prevention of possible complications (non-union).