Objectives: Sarcomas are the most common primary, cardiac malignant tumours but are, nevertheless, rare (0.001-0.03% of all tumours [1-4]. Intimal sarcomas characterised by Murine Double Minute 2 (MDM2) gene amplification originate from large vessels, but from the heart only very rarely. The prognosis of primary cardiac sarcomas is very poor; no evidence-based management guidelines are available. Surgery is the first-line treatment but is not possible in over 50% of cases. Radiotherapy ensures efficient local control and is indicated as neoadjuvant, adjuvant, and palliative treatment.

Materials and Methods: We report the case of a 59-year-old female with a metastatic, cardiac intimal sarcoma identified after symptomatic metastasis to the lower limbs. Imaging revealed a hypermetabolic cardiac mass emerging from the left atrium. Adductor muscle biopsy identified an intimal sarcoma metastasis exhibiting MDM2 gene amplification; the primary site was cardiac. We first prescribed anthracycline chemotherapy and irradiation of the cardiac mass. She received 50 Gy into the planned target volume including the atrial mass (2 Gy per day 5 days per week) delivered via three-dimensional external-beam radiotherapy.

Results: The irradiated cardiac mass did not grow during follow-up, rather, stabilising and then gradually decreasing in size, associated with reduced hypermetabolism. Seven months after radiotherapy ceased, she achieved a complete cardiac response, but the metastatic lesions progressed. Her general condition improved. The heart failure signs disappeared and her symptoms became less serious.

Conclusion: Radiotherapy should be favoured for patients with cardiac or intimal sarcomas featuring MDM2 amplification. The tumour seems to be radiosensitive, although anthracycline may also have been helpful. Radiotherapy is a valuable tool and could reduce mortality caused by local heart failure.

Sarcomas are the most common, primary, cardiac malignant tumours and have a very poor prognosis (9 to 27 months); the median survival is less than 1 year. Intimal sarcomas constitute most cardiac sarcomas (42% in a recent study; 2). Molecular diagnosis reveals Murine Double Minute 2 (MDM2) gene amplification [5]. Intimal sarcomas are mesenchymal tumours of large vessels, but rarely the heart. Radiation is part of the treatment strategy but guidelines are lacking. We report the case of a patient who developed a cardiac intimal sarcoma at the metastatic stage of disease. To the best of our knowledge, this is the first case exhibiting a complete response after chest irradiation.

We present the case of a 59-year-old female with a metastatic intimal sarcoma of cardiac origin. She complained of lower limb neuropathy with paresthesia, associated with palpable masses of both adductors and buttocks 3 months in duration. Her general condition was poor (performance status 2); she exhibited chronic shortness of breath during effort, and thoracic oppression. Magnetic resonance imaging (MRI) revealed three contrast-enhanced intramuscular masses in the gluteus (35 × 37 mm) and both adductors (28 × 38 and 64 × 84 mm). Histology was performed on ultrasound-guided, adductor biopsy tissue. The tumour cells were anisomorphic and exhibited hyperchromatic nuclei. Immunohistochemistry was strongly positive for vimentin, Wilms tumour protein 1, cluster of differentiation 34, and cytokeratin; patchily positive for myogenin, S-100 protein, CD68, and D2-40; and negative for smooth muscle actin, desmin, cytokeratin, and epithelial membrane antigen Ki67.: 60 %. The CGH-array revealed the CDK4/MDM2 amplification q1 (chromosome 9 23.1-24.1), no alpha platelet-derived growth factor amplification, and no epidermal growth factor receptor gain. We thus diagnosed an intimal sarcoma metastasis. Staging via positron emission tomography (PET) identified multiple contrast-enhanced, hypermetabolic muscular lesions with photopenic centres in the thighs, and the scapular and left paravertebral muscles. PET also revealed an intracardiac mass in the left atrium; this appeared to be the most metabolically active lesion but lacked a photopenic centre, in line with a primary cardiac origin of disease (Figure 1). Heart failure signs included bilateral pleural effusions. Cardiac MRI (Figure 2) revealed a mass 4.8 × 2.9 × 3.3 cm in dimensions emerging from the lower wall of the left atrium into the mitral valve. Transthoracic ultrasound (Figure 3) revealed a normal left ventricular ejection fraction (64%) but significant pulmonary arterial hypertension (PASP=72 mmHg), and an ectatic left atrium (77 mL/m²) with a polylobular mass. The patient was not a candidate for surgery. Anthracycline (doxorubicin 60 mg/m2) was prescribed, as was decompressive radiotherapy for the heart mass; doxorubicin was suspended during thoracic radiotherapy. She received 50 Gy to the cardiac mass (2 Gy/day on 5 days/week; 25 fractions). Two months after radiation therapy concluded, clinical improvement was evident and ultrasonography revealed cardiac stability. Cardiac MRI and PET revealed that the size and intensity of the cardiac mass had decreased, in contrast to progression of the metastatic lesions. A PET scan taken 7 months after radiation therapy was completed revealed complete disappearance of the cardiac mass hyperfixation, in parallel with the development of new hyperfixation areas and increases in the sizes and intensities of the other metastases. She received palliative radiotherapy of 30 Gy (3 Gy per day for 10 days) to the right thigh and lumbar region because of compression of the sciatic nerve. Clinically, her limb masses stabilised and mobilisation seemed easier. After an episode of confusion, brain MRI revealed a deep right capsulothalamic metastasis. Whole-brain radiation therapy (20 Gy over five sessions) was delivered. At 13 months after diagnosis, she died of septic shock.

One month after the earlier cardiac irradiation, the heart failure signs decreased, as did the dyspnea and chest tightness. Her general state improved. On imaging (Figure 4), the irradiated cardiac mass did not progress during follow-up, being initially stable, followed by gradual decreases in size and hypermetabolic status. At 7 months after radiotherapy concluded, the cardiac tumour exhibited a complete response. The metastatic lesions progressed to the end of follow-up. Radiotherapy was well tolerated. Six weeks after such therapy ceased, imaging revealed a left, lobar pulmonary hyperfixation compatible with radiation pneumopathy (grade 1 on the CTCAE V4 scale). No cardiac toxicity was noted. 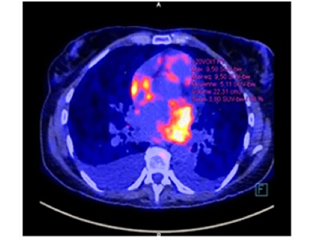 Figure 1: Positron emission tomograph taken at the time of diagnosis. 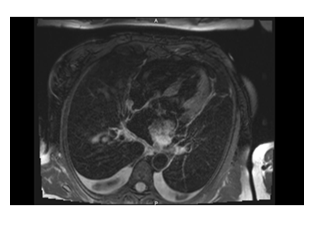 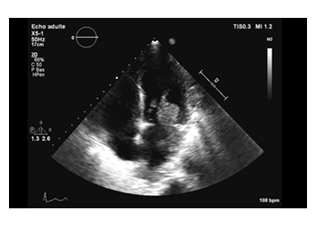 Figure 3: Transthoracic echocardiograph taken at the time of diagnosis. 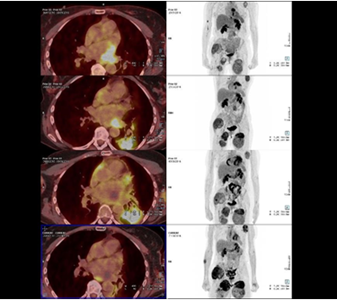 Figure 4: Positron emission tomographic findings at diagnosis; and 2, 4, and 7 months after radiotherapy concluded.

The patient was diagnosed and followed-up at the Dupuytren University Hospital Centre in Limoges, France. Because of the risk and the poor prognosis, the cardiac mass was not biopsied. Adductor biopsy tissue was examined in the University Hospital Centre of Bordeaux (the regional reference centre), confirming a metastasis of an intimal sarcoma. MDM2 amplification was confirmed via fluorescence in-situ hybridisation. Three-dimensional conformal external-beam radiotherapy was delivered by a Clinac 2300 linear accelerator (energy beams of 18 MV). An anterior and a posterior beam (1 Gy each) were employed (Figure 5). The prescribed dose of 50 Gy was delivered to the planned target volume (PTV) (the atrial mass with a margin of 1 cm) at 2 Gy per day on 5 days per week (25 fractions). The PTV received more than 95% of the prescribed dose. Organ-at-risk dose-constraints were respected (Figure 6). 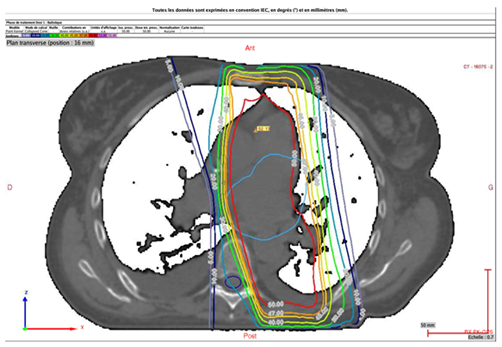 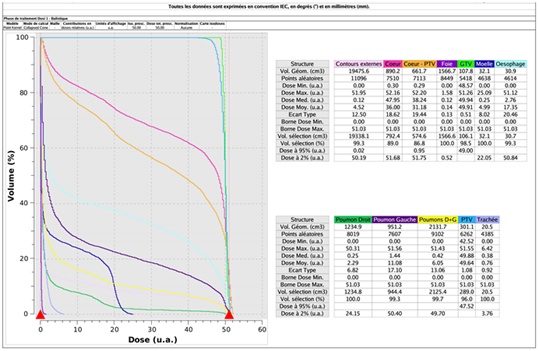 Primary cardiac sarcomas represent only 0.001-0.03% of all tumours (1-2). Intimal sarcomas constitute most left-heart malignancies. Histological diagnosis requires a positive MDM2 test, recommended as part of every cardiac tumour workup [5]. MDM2 amplification is also evaluated when analysing undifferentiated spindle cell sarcomas. MDM2 amplification is not specific for intimal sarcoma, being evident in several sarcoma subtypes. The term “intimal” may seem inappropriate when applied to a heart tumour, but describes an undifferentiated sarcoma with MDM2 amplification [6]. MDM2 may be a useful treatment target or may impart radiosensitivity.

Very few intimal sarcomas developing from heart tissue have been described. No evidence-based management guideline is available. The standard therapy is surgical resection. However, the prognosis is very poor even after surgery; resection is not possible in almost 50% of cases given the proximity to vital structures or the inability of patients to afford cardiac transplantation. Historically, sarcomas are poorly radiosensitive. An in vitro study showed that the radiosensitivity of sarcomatous cells was as poor as those of adenocarcinoma lines [7]; radiosensitivity varied by histological subtype. Radiotherapy (combined or not with surgery) improves progression-free survival in patients with cardiac sarcomas of all subtypes, significantly reducing the risk of local recurrence (particularly of high-grade sarcomas or intermediate-grade tumours if resection is incomplete). Neoadjuvant radiotherapy can complement surgery. The most common dose worldwide is 50 Gy at 1.8 or 2 Gy/fraction, with a possible overprint to 66 Gy for positive margins. Hypofractionated schemes are used for palliative purposes. Intensity-modulated radiotherapy spares the surrounding tissues, especially in the thoracic region. We prescribed decompressive radiotherapy for a palliative purpose. In terms of toxicity, PET revealed acute radiation pneumonitis 2 months after irradiation ceased. Risk organ dose-constraints were respected, the lung V20 Gy was 24% and the middle dose about 11 Gy (Figure 6). The literature (including several meta-analyses) considers that the risk of radiation pneumopathy is significant if the V20 Gy is >30% and the middle dose >20 Gy [8]. Pneumopathy developed in the cardiac mass field wherein the left lung received 30 to 50 Gy (Figure 6). We found that radiotherapy effectively treated the cardiac sarcoma of an inoperable case; our aim was not curative being, rather, palliative. Intimal sarcomas, and sarcomas evidencing MDM2 amplification, appear to be radiosensitive. Radiotherapy is less indicated for intracardiac tumours because of associated toxicity. Radiotherapy should be optimised to treat cardiac sarcomas effectively and safely. The effects of radiation can be amplified by radiation sensitisers. Anthracycline (a radiosensitising agent) may have enhanced radiotherapeutic effectiveness but also had the potential to increase cardiac toxicity. The emerging development of nanoparticles that amplify tumour responses to radiation, but not those of healthy tissues, is interesting [9]. Adaptive radiotherapy, intensity-modulated radiation therapy, and proton therapy may all benefit from such advances. Proton therapy has sometimes been used to treat cardiac sarcomas, such as intimal sarcomas of the large vessels, with encouraging results. Dosimetry studies have shown that proton therapy enhances the protection of healthy structures [10].

To the best of our knowledge, this is the first described case of an intimal cardiac sarcoma patient who achieved a complete response after thoracic irradiation. The irradiated location (only) responded fully within 7 months. and this was associated with improvement in general status and functional capacities. Radiotherapy may efficiently treat cardiac intimal sarcomas or sarcomas exhibiting MDM2 amplification. Such tumours seem to be radiosensitive, although chemotherapy may also have been helpful. Radiotherapy deserves to be optimised, as this decreases mortality caused by local failure and alleviates symptoms.

The patient kindly provided her informed consent at the time of hospital admission to the publication of personal data.

This research was not funded by any specific grant from funding agencies in the public, commercial, or not-for-profit sectors.

We thank Textcheck for their assistance with editing the language of this manuscript. The English in this document has been checked by at least two professional editors, both native speakers of English. For a certificate, please see: http://www.textcheck.com/certificate/OMcukf