Cervicogenic headache (CGH) is a type of secondary headache where the symptoms originate from a dysfunction in the cervical spine. Mechanical cervical spine pathologies and dysfunction in the neck muscles may lead to CGH. This report presents a case of a female with fluctuating headache related to cervical disorders. Her headache was concurrently eliminated with resolution of the cervical disorder following spinal adjustment in combination with extension-compression traction. The efficacious response was attained over a year after completion of treatment. Strategies to release the strain of the supporting cervical extensors can be beneficial for alleviating CGH.

According to the International Classification of Headache Disorders 3rd edition (ICDH-3) [1], cervicogenic headache (CGH) is defined as a secondary headache caused by a disorder of the cervical spine and its component bony, disc and/or soft tissue elements, usually but not invariably accompanied by neck pain. Although the exact pathophysiology of CGH is unknown, it is likely that pain is generated by structures innervated by the upper three spinal nerves [2]. The convergence of nociceptive pathways may refer pain signals from the neck to the trigeminal sensory receptive fields of the face and head. Mechanical cervical spine pathologies and dysfunction in the neck muscles may lead to CGH [2]. Upper cervical spine mobility restriction (hypomobility), cervical pain, and muscle tightness are clinical findings associated with CGH during physical examination [3]. The evidence of a cervical pathology is an obligatory requirement for a definite diagnosis [1]. Treatment strategies include medications, anesthetic injections, physical therapy and occasionally surgical interventions. Medications alone are often ineffective or provide only modest benefit for this condition. The results of most of the randomized controlled trials [4-7] indicate manipulation/mobilization or corrective exercises as promising interventions.

A 37-year old female was referred to chiropractic therapy by her neurologist with episodes of pains in the head and neck and numbness in the right lateral forearm, which had been ongoing for 3 years. The patient could not recall a specific incident which caused the pain. She described her symptoms as an aching pressure on the back of her neck that extended into the right occipital, temporal and frontal regions. The most intense headache was rated as 7/10 and neck pain was rated 5/10 on the numeric pain rating scale (NPRS). The pain occurred as often as several times a week and could last for hours. She was employed as an investment banker, which required her to work at a computer most of the day. She attributed these symptoms to long periods of working at her desk. Nonpharmaceutical approaches such as psychotherapy for reducing stress and acupuncture for ameliorating pain had been tried, which did not change the symptoms. Her medication included non-steroidal anti-inflammatories, tricyclic antidepressants, and sleep aids over the past 3 years.

At the initial phase of care, the treatment sessions included spinal manipulation and thermal ultrasound therapy to restore the mechanical functioning of the cervical spine, and normalize the muscular functioning of the neck. Treatment was given three times a week for 3 months. Her paraesthesia disappeared and pains were reduced to 3/10 on NPRS at 3 months from the beginning of the treatment. The goal of her second phase of treatment was to normalize the head position. An extension-compression traction (BioPhysics® technique) was applied twice a week for further 3 months. The chiropractic therapy goals had been met following a 6-month treatment. Her head posture was corrected and cervical curvature was restored. The patient displayed normal ROM of the neck without any provocation of pain. She no longer had headaches as well. One year after treatment completion (Figure 1B) the patient remained pain-free and was completely off her medications. 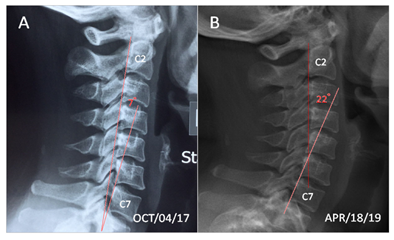 Figure 1: A. Initial cervical radiograph exhibited lower cervical spondylosis, osteophyte formation at C5 and C6, and straightening of the normal cervical lordosis; B. Upon re-assessment, the cervical curvature returned to a concave curve. Magnitude of cervical lordosis at C2–7 remained stable over one year after the completion of treatment.

The prevalence of cervicogenic headache in the general population is estimated to be 4.1%, but is as high as 20% of patients with chronic headache [3, 8]. The most general cause of cervicogenic headache (CGH) is the alteration of structure in the neck due to bad posture [8]. It is noted that CGHs can often be related to forward neck and head posture, which is accompanied by a high muscular tone of the supporting extensors to keep the head from gravity [9, 10]. Such unstable state causes overstrain of the cervical muscles, and induces headache and neck pain [11]. Office workers of being sedentary for prolonged periods are liable to adopt forward head posture and thus generating neck strain, sprain and pain. Moreover, forward head posture is commonly found in people spending long periods on computers, mobile phones and game consoles. A study conducted in 369 subjects of different occupations, researchers observed that straightening of the normal cervical lordosis is the commonest alteration in individuals with forward head posture, which predisposes them to various neck pains and even to compression of cervical nerve roots [12].

Pharmacotherapy is often the first approach for treating most primary headaches, such as migraine, tension-type headache, etc. For patients with secondary headaches, such as CGH, often do not respond sufficiently to medications [9, 11]. A multifaceted approach, including transcutaneous electrical nerve stimulation, radiofrequency neurolysis, manipulative therapy, mechanical traction and therapeutic exercise is recommended to address individual impairments in CGH patients [9, 10]. Clinical results from randomized controlled trials [4-7] and retrospective cohort chart review [13] suggest that physical, manual and corrective modes of therapy can lead to an effective, evidence-based relief of headache in CGH patients. However, due to heterogeneity in treatment regimens these results should be interpreted cautiously [3, 8]. Our patient had headaches related to strain of posterior cervical muscles in the clinical setting of cervical hypolordosis. This pattern of cervicogenic headache appeared to be a well-defined condition that could be treated conservatively and effectively by manual regimens. The limitation of the current report is that it is just a single case. Further research regarding the manual approaches to alleviating cervicogenic headache and reversing anterior head posture is needed to clarify these issues.

No conflicts of interest to declare.