4Graduate School of Science and Engineering for Research, University of Toyama, Toyama 930-8555, Japan

Metabolic syndrome is defined as a disease state complicated by multiple metabolic diseases such as hyperlipidemia, hypertension, and diabetes. Even when each individual component disease is mild, the risk of metabolic syndrome is high. Over the past decade, different organizations have been proposed various diagnostic criteria. The use of traditional Chinese medicine for the treatment of metabolic syndrome is becoming increasingly popular due to its wide availability. In this paper, we report a case of metabolic syndrome improved when a 64-year-old woman with hypertension, hypercholesterolemia, and obesity administered 7.5 g of Kangen-karyu extract per day. After 6 months, serum lipid levels were improved. The abdominal circumference, body weight, and blood pressure were decreased following administration. At that time, the physical and subjective symptoms had partially disappeared. On tongue diagnosis, there was a notable improvement in vessels below the tongue. Herein, we present evidence supporting the use of Kangen-karyu extract against metabolic syndrome.

Metabolic syndrome is a complex disorder defined by characteristic atherogenic dyslipidemia, hypertension, insulin resistance with or without hyperglycemia, a prothrombotic state, and a proinflammatory state. Cardiovascular disease is the most common clinical sequela of metabolic syndrome. The syndrome is also associated with a greatly increased risk of type 2 diabetes mellitus, which in turn increases the cardiovascular risk. Its main components are dyslipidemia (high triglycerides and low-density lipoproteins, and low high-density lipoproteins), elevation of arterial blood pressure, and dysregulated glucose homeostasis, while abdominal obesity and insulin resistance are gaining attention as key symptoms of the syndrome [1, 2].

Therapy for metabolic syndrome is multifaceted, as is the syndrome itself. Effective preventive approaches include lifestyle modification, mainly weight loss, diet, and exercise, and the treatment comprises the appropriate use of pharmacological agents to reduce the particular risk factors [3]. Traditional Chinese medicine has also been used for a long time in the treatment of metabolic syndrome. A disease is the result of disbalance in Yin and Yang or the five elements from cold, fever, emotions, or other influences. The main goal in the treatment of disease is to restore the balance, and replenish Qi or blood [4, 5].

Up to now, many traditional Chinese herbs have been tested for treatment of metabolic syndrome. We have been conducted pre-clinical animal experiments to investigate the effectiveness of multi-target treatment of traditional Chinese medicine for various human diseases. In our previous studies, Kangen-karyu (Guan-Yuan-Ke-Li in Chinese; a crude drug consisting of Salviae Miltiorrhizae Radix, Cnidii Rhizoma, Paeoniae Radix, Carthami Flos, Aucklandiae Radix, and Cyperi Rhizoma), a traditional Chinese prescription modified from Kan-shin No. 2 (Guan-xin No. 2 in Chinese) [6], showed beneficial improvement effects on the signs of high-fructose diet-induced metabolic syndrome, such as hyperglycemia, hyperlipidemia, and hypertension, through the reduction of triglyceride and cholesterol levels by the regulation of hepatic sterol regulatory element-binding protein-1 (SREBP-1) expression, and also exhibited protective effects against high-cholesterol diet-induced hypercholesterolemia in rats [7, 8]. We also reported the beneficial effect of Kangen-karyu on dyslipidemia in a mouse model of type 2 diabetes [9]. As Kangen-karyu has been clinically used as a treatment for cardiovascular disease, including angina pectoris and cerebrovascular diseases [10, 11], the results of our previous study provide important evidence that this prescription ameliorates metabolic syndrome.

On the basis of these findings, we administered Kangen-karyu to a patient with metabolic syndrome, and evaluated its treatment-based usefulness.

This study was conducted in accordance with the ethical guidelines of epidemiological studies set by the Japanese Ministry of Education, Culture, Sports, Science and Technology and Ministry of Health, Labour, and Welfare. Ethical approval was obtained from the Clinical Research Ethics Committees of Shinseikai Toyama Hospital (Toyama, Japan). Written informed consent was obtained from the patient at the time of enrollment for the collection of clinical information and biosamples for archival and research purposes. A 64-year-old woman with hypertension and hypercholesterolemia was previously diagnosed with metabolic syndrome at Shinseikai Toyama Hospital. From November 2013, the patient subsequently modified her lifestyle and continued to receive existing treatments: antihypertensive agents (amlodin: 5 mg/day, micardis: 20 mg/day), but had not received hypolipidemia agents. On March 19, 2019, she presented to our hospital, seeking to recover her functional level with herbal medicine. Kangen-karyu extract (7.5 g/day) was administered three times a day until September 25, 2019.

Table 1: Physical characteristics on administration of Kangen-karyu for 6 months.

Table 2: Laboratory data on administration of Kangen-karyu for 6 months.

Assessment of physical and subjective symptoms involved completing a series of questionaries at the beginning and end of the study. The symptom checklist included the following symptoms: dizziness and palpitation, stiff shoulder and headache, chilliness of the limbs and fatigability, mental stress, sleeping disorder, tension of the stomach and abdomen, pain, tingling of the waist and body, dark circles around eyes and lip symptoms, stains on face, aza skin, and tongue symptoms. The change in each symptom was assessed with a 3-point rating scale: “marked improvement” was 5 points, “improvement” was 4 points, and “slight improvement” was 2 points. The assessment of global improvement rating for subjective symptoms is simply related to adding points.

Tongue diagnosis was evaluated by traditional Chinese medicine doctors who collected the information with a digital camera. The researchers checked tongue characteristics, such as the coat color, coat weight, coat surface, tongue action, and vessels below the tongue. 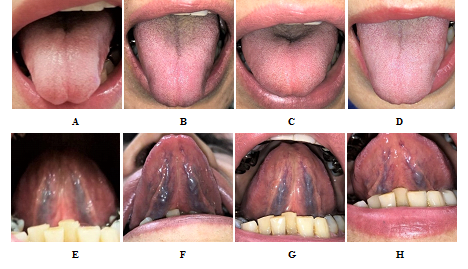 Metabolic syndrome is one of the syndromes known as underlying lifestyle-related diseases. The number of obese patients continues to increase, and visceral fat accumulation has been reported as the most important risk factor for the development of metabolic syndrome. Visceral fat accumulation induces insulin resistance, abnormal glucose metabolism, abnormal lipid metabolism and hypertension, and even if these individual diseases are mild, the presence of more than one of them in the same individual may induce the development of metabolic syndrome, leading to arteriosclerosis or ischemic cardiovascular diseases [12-14]. In the treatment of metabolic syndrome, traditional Chinese medicine is an outstanding example of alternative and complementary medicine with a long history, differentiated theory system, and variety of herbal remedies [4].

We chose Kangen-karyu for the following reasons. Firstly, it has been clinically used as a treatment for cardiovascular diseases [10, 11]. Secondly, Kangen-karyu has received much attention as a source of new therapeutic agents based on pre-clinical animal experiments related to various human diseases [7, 8, 15-20]. To add to these findings, we reported evidence supporting its preventive and/or therapeutic potential against metabolic syndrome in a rat model [8]. The administration of Kangen-karyu significantly improved high-fructose diet-induced metabolic syndrome such as hyperglycemia, hyperlipidemia, and hypertension, through the reductions of high triglyceride and cholesterol contents with the modulation of hepatic SREBP-1 and the nuclear factor-kappa B signaling pathway. The results of our previous study suggest that Kangen-karyu may play a protective role against metabolic syndrome.

In traditional Chinese medicine, tongue diagnosis plays a key role in the meridians and conditions of organs. The characteristic of the tongue reflects the organ status and Qi-blood imbalance. Traditional Chinese medicine practitioners observe the tongue appearance such as the tongue body color or tongue coating to determine the pathogenic factors. The color reflects the condition of the Yin organs, blood, and nutritive Qi. Tongue coating is observed from the tip to root and reflects the hot or cold aspects of the body [5, 21]. The tongue provides a geographic map of organ systems; characteristics of the tongue in each of these areas provide information critical to the traditional Chinese medicine diagnosis [21]. In the present case, there was no difference in the tongue color on comparing patients with and without Kangen-karyu administration. Most notably, however, vessels below the tongue were recovered by Kangen-karyu administration for 6 months to near-normal levels.

Metabolic syndrome is a hypercoagulable state associated with a markedly increased risk of vascular complications. In the theory of traditional Chinese medicine, these vascular complications are classified as blood stasis [22]. Diagnosis of the tongue plays an important role in traditional Chinese medicine; a bluish tongue, petechiae, and engorged sublingual collateral vessels are manifestations of blood stasis. In our case, vessels below the tongue were significantly improved by the administration of Kangen-karyu, whereas the tongue coating was mildly affected. Kangen-karyu, classified as a blood stasis-improving drug, has been clinically used as a treatment for cardiovascular diseases such as angina pectoris and cerebrovascular diseases [11]. The results reported herein identified the therapeutic usefulness of Kangen-karyu to treat blood stasis.