A healthy 20-year-old woman intended to the emergency department because of a 2-months clinical course of progressive asthenia and dyspnea, associated with left neck pain that is unresponsive to the instituted analgesia. No other positive findings were issued in the anamnesis. At physical examination it was worth mentioning sinus tachycardia, tachypnea and auscultatory silence throughout the left hemithorax, without respiratory failure. Chest radiography (Figure 1) revealed opacity of the entire left pulmonary hemithorax, with significant contralateral mediastinal deviation. Analytical studies revealed: hypochromic microcytic anemia, increased lactate dehydrogenase (LDH) and increased C-reactive protein. Thoraco-abdomino-pelvic computed tomography (CT) (Figure 2) showed a solid mass (78 × 94 × 121 mm) apparently centered in the anterior mediastinum and with supra-clavicular extension, with lobulated contours and without cleavage plans with the pericardium, the aortic cross or the thoracic operative, as well as, a total left lung atelectasis and pleural effusion in the entire left hemithorax, with signs of compression and contralateral mediastinal deviation. Thoracentesis was performed with drainage of 1000 mL of milky-looking pleural fluid whose analysis was compatible with chylothorax (amicrobial, pH 7.5, 935 leukocytes/µL with 29% polymorphonuclear cells and a clear predominance of lymphocytes, 5.3 g/dL proteins, 684 mg/dL triglycerides, 123 mg/dL cholesterol, normal glucose and LDH).

Patient was admitted at a cancer service and the diagnosis of classic Hodgkin's lymphoma of the nodular sclerosis subtype (stage II-B) was established. The staging 18-F-fluoro-2-deoxyglucose (18F-FDG) positron emission computed tomography (PET/CT) (Figure 3A) showed abnormal 18F-FDG uptake in the anterior mediastinum and in the left superior and posterior cervical, supra-clavicular and axillary ganglia bilaterally, and in the upper trachea, as well as in the left pleura. First line chemotherapy with ABVD (Adriamycin-Bleomycin-Vinblastine-Dacarbazine) was performed without relevant adverse drug events. After the 2nd cycle of chemotherapy, the PET/CT revealed a complete remission (Figure 3B).

Chylothorax is a rare but serious condition caused by obstruction or disruption of the lymphatic branches draining the lower body and gastrointestinal tract. Chylothorax is characterized by the presence of lymphatic fluid with triglycerides and chylomicrons in the pleural cavity [1]. Etiologically, it can be divided into traumatic or non-traumatic, and this separation is of pathophysiological importance, since the treatment should be individualized aiming at the underlying cause of the condition. Traumatic chylothoraxes’ represent the majority of cases, with most arising as postoperative complications of surgery; the most common cause of non-traumatic chylothoraxes’ is cancer [1]. The images presented aim to exemplify one possible presentation of Hodgkin's lymphoma: indolent, without serious clinical repercussions, even though the extensive pleural effusion and the large associated mediastinal mass. It also reinforces the importance of the differential diagnosis of pleural effusion, recalling the hypothesis of chylothorax as an underlying cause. Furthermore, it highlights the role of 18F-FDG-PET/CT as a functional imaging modality that has become a standard tool in the management of Hodgkin lymphoma [2]. 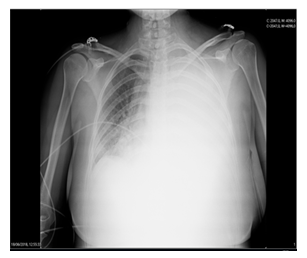 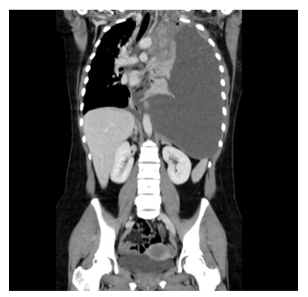 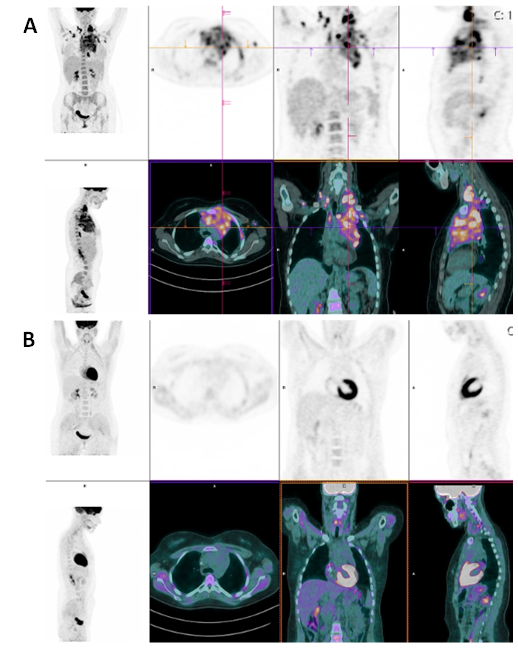 Figure 3: PET/CT scan before starting chemotherapy (A) shows an heterogeneous increased uptake of 18F-FDG in a large mass of the anterior mediastinum, in left superior and posterior cervical lymphadenopathies, in right paratraqueal and in supraclavicular and axillary bilaterally lymph nodes, as well as in the left pleura. After 2 cycles of ABVD chemotherapy (B) hypermetabolic changes of 18F-FDG are not apparent suggesting complete remission of the disease.

I declare on behalf of all authors that we do not have financial interests related to the work described in this paper.

Communication with the Media and Embargo

We do not have plans for publicizing this paper.