The association of endometriosis with ovarian cancer has been a rare but well-documented phenomenon since 1925, when Sampson first described clear cell carcinoma arising from endometriosis. Here, we report the case of a woman who underwent staging including total abdominal hysterectomy and bilateral salpingo-oophorectomy with the excision of an abdominal wall mass at the site of her cesarean section scar. Although the abdominal wall mass and lymph node was proven to be clear cell carcinoma, the patient’s ovaries were free of carcinoma. This case provides important etiological evidence because it is a clear example of endometriosis that has transitioned to clear cell carcinoma. We report this case for review.

The patient was 50 years old, married, and T2 P0 A4 L2 at presentation. She had a prior history of the following operations: cesarean section in 1992 and excision of a soft tissue mass that was identified as endometriosis in 2003. She had a family history of hypertension and diabetes mellitus.

The patient transferred to our institution with metastatic clear cell carcinoma that had been pathologically proven by ultrasonography-guided bilateral inguinal lymph node biopsy. She had undergone a cesarean section in 1992 and had had a soft tissue mass excised in 2003. The mass was diagnosed as endometriosis in 2003. She was admitted, and a baseline study was performed. There were no abnormal finding in complete blood count, urinalysis, chemical analysis, electrolyte analysis, chest radiography, and electrocardiography. Of the tumor markers, cancer antigen (CA) 125 was slightly elevated (45.4 U/mL, reference range 0–35 U/mL), while CA 19-9 and carcinoembryonic antigen were within normal ranges. 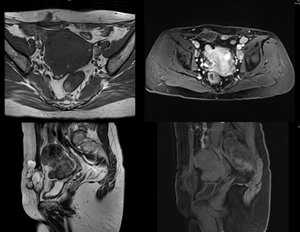 Positron emission tomography-computed tomography showed a lobulated contour of the uterus with multiple myomas. Multiple enlarged lymph nodes were suggestive of malignant lymph nodes. They involved the right internal iliac, left external iliac, and bilateral inguinal areas. There was a soft tissue mass with a cystic portion in the right anterior abdominal wall (Figure 2). The mass was suspected to be a malignancy. 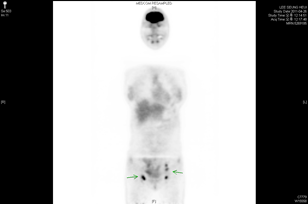 At the time of the operation, a subcutaneous mass (approximately 5 × 3 cm) was observed on the right side of the cesarean section site. The mass was excised and sent to the pathology department. Evaluation indicated clear cell carcinoma. After entering the abdominal cavity, the uterus was normal in size and multiple myomas were noted. Both ovaries and fallopian tubes were normal in gross appearance. Metastatic clear cell carcinoma was proven by inguinal lymph node biopsy.

Accordingly, ovarian clear cell carcinoma was suspected and we decided to perform a staging laparotomy, including total abdominal hysterectomy, bilateral salpingo-oophorectomy, bilateral pelvic lymph node dissection, total omentectomy, incidental appendectomy, and paraaortic lymphadenectomy. Severe utero-rectosigmoidal adhesion was present and a mass-like lesion (2 × 2 cm) was noted in the colon. Low anterior resection was performed by the department of general surgery. A mesh was applied to the right abdominal wall to cover a fascial defect due to the abdominal wall mass excision.

On pathologic examination, both ovaries were free of carcinoma. Only an endometriotic cyst and endometriosis were noted. Nonetheless, metastasis was observed in 3 of 14 regional lymph nodes. Soft tissue from the abdominal mass excision was proven to be clear cell adenocarcinoma associated with endometriosis. Endometriosis was noted at the site of the lower anterior resection. Adenomyosis in the deep myometrium, leiomyoma, and a left paratubal cyst were also noted (Figure 3). 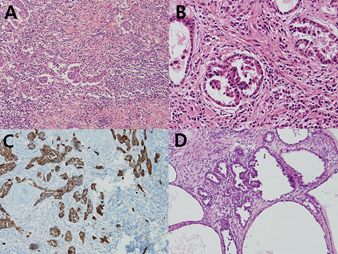 The patient was discharged five days after surgery. She received adjuvant chemotherapy with paclitaxel and carboplatin. Because of postoperative wound dehiscence, the patient received continuous dressing, debridement, and coverage with rectus muscle flap transposition, performed by the plastic surgery department. After the sixth cycle of postoperative adjuvant chemotherapy, a positron emission tomography-computed tomography scan was performed. The bilateral inguinal lymph nodes had decreased in size. However, we observed persistent 18F-fluorodeoxyglucose (FDG) uptake, which was suggestive of a residual viable lesion. Further, we observed an enlarged left iliac lymph node with intense FDG uptake, suggestive of malignant lymph node status. Palliative tomotherapy was performed on the left iliac, bilateral, and inguinal lymph nodes.

The association of endometriosis with ovarian cancer has been a rare but well-documented phenomenon since 1925, when Sampson established the first histopathological criteria. To demonstrate that endometriosis has transformed into malignancy, several criteria have been recommended [2]. The natural history of ovarian cancer, its pathogenesis, and the origin of precursor cells are poorly understood. Recently, a novel theory of ovarian carcinoma progression has been proposed [3]. According to this model, surface epithelial tumors can be clinicopathologically and genetically divided into 2 categories that correspond to pathways of tumorigenesis. The transformation of endometriosis to cancer can be classified as follows: transformation to ovarian clear cell carcinoma at the ovary, to extragonadal clear cell carcinoma, or to other extragonadal carcinoma. Studying 222 malignant tumors originating from endometriosis, Irvin and Perkey found 169 ovarian and 53 extragonadal cases [4]. The most common site of transformation is the ovary, but extragonadal transformation has been observed at the rectovaginal septum, pelvic peritoneum, uterine ligament, vagina, and colorectal serosa [5].

Because of its rarity, there is no standard treatment strategy for clear cell carcinoma of the abdominal wall. Complete surgical excision with normal margins has a 0–15% tumor recurrence rate in the first year. In our case, the tumor was localized and resectable according to the preoperative evaluation. Complete surgical excision was important to remove the tumor, diagnose clear cell carcinoma, and prevent recurrence. The 5-year survival rate of patients with malignant transformation of endometriosis in the abdominal wall varies from 10% to 100%, depending on the histologic type and disease localization [9]. Because the malignant transformation of endometriosis is rare, the optimal treatment remains unknown. Treatment with chemotherapy, radiotherapy, and progestin therapy have been proposed, but their efficacies remain unclear [10, 11].

In summary, we have described clinical scenarios of abdominal wall clear cell carcinoma with surgical and adjuvant chemotherapy treatment. We have reported the rare case of a patient who had clear cell carcinoma at a cesarean section scar site, but whose ovaries were free of cancer.