Colpocephaly in a 62-Year-Old Woman: A Case Report

Colpocephaly is the disproportionate dilation of the occipital horns of the lateral ventricles and commonly diagnosed in infancy, but very rare in adults. We report a case of a 62-year old known hypertensive woman with a predominantly left sided colpocephaly which was incidentally diagnosed during a Computed Tomography (CT) Scan examination at the Cape Coast Teaching Hospital after admission with a history of palpitation, chest pains, and generalized bodily pains. She was found to be slightly confused with all other examination findings being normal except a blood pressure of 170/101 mmHg. A provisional diagnosis of acute confusional state secondary to uncontrolled hypertension was made, to rule out electrolyte imbalance and cerebrovascular accident, the investigation of which revealed this case of colpocephaly in an adult. Colpocephaly in adults is rare and often asymptomatic, therefore may be misdiagnosed as normal pressure hydrocephalus and an awareness of this will help prevent unnecessary diagnostic and therapeutic interventions.

Colpocephaly is a term used to describe the disproportionate dilation of the occipital horns associated with normal frontal horns [1]. This abnormality was first recognized by Benda in 1940 in a mentally retarded patient on neuropathological examination and described this abnormality as vesiculocephaly [2]. The term colpocephaly was suggested by Yakovlev and Wadsworth in 1946 after identifying this same patient as a case of fused lip schizencephaly [3]. There are various symptoms of colpocephaly and its effects on patients depend on the degree of severity [4]. Clinically, in the early phase of life, the patient may have delayed neuropsychomotor development, muscular spasms, seizures, visual and motor disorders [5]. Most cases of colpocephaly reported in scientific journals are typically cases discovered in infancy. Since the first report of colpocephaly in adults by Wunderlich et al in 1996, a total of ten cases have been reported so far in literature; the most recent ones reported by Srivastava and Parker et al in 2018 and 2019 respectively [6]. To add to scarcely available literature or reports on colpocephaly in adults, we report a peculiar case of a 62-year old woman with predominantly left sided colpocephaly.

A 62-year-old female farmer who had been apparently well until she suddenly felt unwell and was brought to the emergency room of the Cape Coast Teaching Hospital (CCTH) because of complaints of chest pains, palpitations and generalized bodily pains of two days duration. She was a known hypertensive who had not been taking her medications for six weeks prior to her admission. Physical examinations revealed a normal respiratory system, gastro-intestinal system and musculoskeletal system. Her blood pressure was 170/101 mmHg and a pulse of 96 beats per minute was recorded. The heart sounds were normal. The Central Nervous System (CNS) revealed a conscious patient without any neurological deficits but was confused with a Glasgow Coma Scale (GCS) of 14/15 (Eye Opening Response (E) - 4/4, Motor Response (M) - 6/6 and a Verbal Response (V) – 4/5).

A provisional diagnosis of acute confusional state secondary to uncontrolled hypertension was made, to rule out electrolyte imbalance and cerebrovascular accident. The patient was admitted for a head CT Scan and other investigations including Chest X-ray, Electrocardiography (ECG), Liver Function Test, Kidney Function Test, Blood Sugar, Hepatitis B and C, Malaria and Full Blood Count to confirm the provisional diagnoses. She was put on bed rest and on her routine anti-hypertensive medication. Her GCS became normal (15/15) and a blood pressure of 130/70 mmHg was recorded just a day after the admission.

The CT scan of the head done on admission revealed this case of adult asymmetrical colpocephaly and essentially normal brain parenchyma as shown in [Figure 1] below and the presence of a normal corpus callosum shown with the white arrow on [Figure 2] below. All the other investigations were unremarkable. The patient was discharged three days after admission on her anti-hypertensive medication. A written informed consent was obtained from the patient after her discharge from the hospital, for her case to be written for publication with assurance of anonymity and confidentiality. The patient is currently well and going about her usual activities. She has been enrolled into the hypertensive clinic of the CCTH. 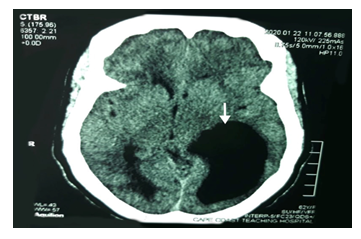 Figure 1 : 62-year-old woman who presented with palpitations, chest pains and generalized bodily pains, with a provisional diagnoses of acute confusional state secondary to uncontrolled hypertension. A non-contrast axial CT Scan of the head done, shows dilatation of the occipital horns of the lateral ventricles more prominent on the left side consistent with colpocephaly (white arrow). The brain parenchyma was unremarkable. 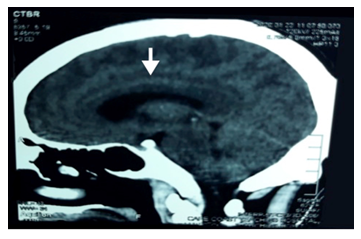 Figure 2: 62-year-old woman who presented with palpitations, chest pains and generalized bodily pains, with a provisional diagnoses of acute confusional state secondary to uncontrolled hypertension. A non-contrast sagittal CT Scan of the head done shows the presence of the corpus callosum (white arrow).

A colpocephaly in a 62-year old woman is reported and the need for physicians to be aware of it because of its asymptomatic nature and not to be misdiagnosed as NPH. To the best of our knowledge, this is the very first case of this condition we are seeing in our region emphasizing the rarity of the condition in adults. Colpocephaly with or without agenesis of the corpus callosum is a rare disorder that is usually diagnosed within the initial years of life. This case report on colpocephaly in a female adult as well as the previous ones reported adds to the awareness of this type of disorder and a good understanding of these abnormalities will help prevent unnecessary diagnostic and therapeutic interventions.

The authors certify that they have obtained all appropriate patient consent. Ethical clearance was not required for this report, as anonymity and confidentiality was assured hence no identifying detail was included.

All authors made substantial contribution to conception, design, implementation, drafting, revising and approving the manuscript for publication.

The authors are grateful for the patient for consenting to make this report possible.

No funding obtained for this report.