Primary ovarian sarcomas are very rare tumours and are characterized by poor prognosis. Surgical treatment is mainly based on epithelial ovarian cancer debulking approaches, while chemotherapy is based on data extrapolation from studies in sarcomas of other primary sites. Trabectedin has been established as a standard of care for the treatment of soft-tissue sarcomas in the 2nd line setting. So far, no data from randomized clinical trials support specific maximum number of cycles of trabectedin for any gynaecological sarcoma. Moreover, limited evidence in the literature supports the feasibility and safety of trabectedin administration in haemodialyzed patients.

This report presents the case of a 48-year old female diagnosed with metastatic high-grade undifferentiated sarcoma of the right ovary. She underwent primary surgery followed by 1st line chemotherapy with doxorubicin plus ifosfamide, and had a partial response after cycle 3. However, treatment tolerance was very poor with grade 3 and 4 hematologic and non-hematologic toxicities, including the development of chronic kidney failure that required permanent haemodialysis. Treatment was changed to trabectedin, leading to a complete response that is ongoing and lasts for over 2 years. Our case supports safety of long-term trabectedin administration in a hemodialyzed patient with the achievement of durable complete disease response on the metastatic setting.

Primary ovarian sarcomas are very rare malignant solid tumors of mesenchymal histology, characterized by limited response to platinum-based chemotherapy and lower progression-free and overall survival compared to epithelial ovarian cancers [1]. Based on the latest WHO classification they are divided in:

Other primary ovarian sarcomas, like leiomyosarcomas and rhabodmyosarcomas can be classified either as their primary uterine counterparts or as abdominal Soft Tissue Sarcoma (STS) [3].

The most frequent ovarian sarcoma is mixed mullerian tumor/ carcinosarcoma accounting for 1-4% of primary ovarian cancer with an incidence of 0.19/ 100,000 women [4]. Prognosis is poorer than epithelial ovarian cancer with a median survival of 18 months [5]. Reports of patients surviving over 46 months underline the importance of optimal debulking followed by ifosfamide/ cisplatin or platinum-based chemotherapy [6]. Other ovarian sarcoma types are considered very rare, accounting for approximately 1% of primary ovarian cancer [7] and include angiosarcoma, rhabdomyosarcoma, endometrial stromal sarcoma and fibrosarcoma.

Trabectedin is an antineoplastic agent that was initially extracted from the marine tunicate species Esteinascidia turbinata. Its mechanism of action involves direct interference with the minor DNA groove, induction of apoptosis and inhibition of the expression of FUS-CHOP, EWS-CHOP and other transcriptional factors that act as oncogene products and immunomodulatory and anti-inflammatory activity [8-10]. Currently, trabectedin is used as 2nd line therapy and beyond for advanced STS. Initial approval was granted in 2007 in Europe, for administration in advanced STS patients progressing on/ or being ineligible for anthracycline and ifosfamide therapy. Phase 2 clinical trial results showed a median duration of survival of 9.2 months and comparable PFS to standard chemotherapy regimens in pretreated patients [11]. Subsequently, approval was granted in the USA in 2015 for patients with advanced pretreated L-STS, including uterine LMS.

A 48year-old female was admitted in the A & E department with abdominal pain reflecting to the right iliac and inguinal region. Lab workup indicated acute kidney injury and abdominal & pelvic imaging with ultrasonography, CT and MRI revealed a 9cm pelvic mass, causing right ureter obstruction and a LN block encasing right iliac vessels and para-aortic LNs (Figure 1). Medical history included recurrent vaginal bleeding for which she had three dilatation and curretage procedures (all negative for malignancy) within ten years and eventually a TAH that was performed ten months before present diagnosis. 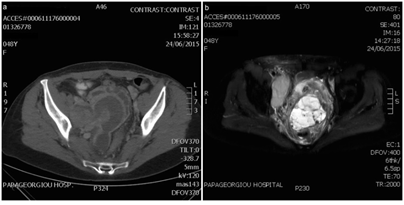 Renal function gradually deteriorated to grade 4 chronic renal failure, two weeks after cycle 3 (Cr=5.25 mg/dL, CrCl=11.16 mL/min/1.73 m2). The patient required long hospitalization due to complications including urinary tract infection. Obstructive renal disease was excluded and she was started on regular hemodialysis. Colimycin and tigecycline were administered for a multi-drug resistant strain of Pseudomonas aeruginosa in the urine. At that time, a right kidney biopsy indicated infectious pyelonephritis.

Treatment with doxorubucin/ ifosfamide was permanently discontinued and was replaced with iv. trabectedin 1.5 mg/2 d1 q3w, with d1 given at the same day with hemodialysis. First CT restaging after 3 cycles revealed thoracic and abdominal PR (Figure 3) that was maintained in the subsequent scans. However, new lung nodules of 5mm appeared in the RML and RLL at the CT restaging after cycle 14 (11 months of treatment) (Figure 3). Considering the small volume of progressive disease and the patient’s excellent performance status, treatment continuation was decided, leading to gradual partial remission and finally to complete thoracic disease remission and no evidence of abdominal disease after cycle 25 (Figure 3). The patient has so far received 47 cycles of trabectedin for 3 years and remains disease-free by conventional imaging for over one year, while completing 3 years on hemodialysis. Treatment has been overall well tolerated with mild hematological toxicity managed with a 25% dose reduction plus filgrastim-48mU, S:1 × 1 for 5 days after recurrent uncomplicated grade 3 neutropenia.

Real-life data of trabectedin in STS treatment are indicative of similar or even better outcomes than the original clinical trials that led to drug approval in terms of PFS and OS. These findings vary in efficacy with ORR of 37.8%, maximum DCR of 81.8%, median PFS of 11.6 months and OS of 22.3 months. Regarding safety, the most frequently reported grade 3/4 side effects are neutropenia and liver toxicity and toxicity-related treatment discontinuation rates reach 18% [14]. Buonnadonna et al. evaluated trabectedin treatment outcomes and toxicity in 218 patients from 41 centers in Europe mainly diagnosed with leiomyosarcomas, liposarcomas and synovial sarcomas. ORR was 26.6%, median PFS was 5.9 months, and median OS was 21.3 months. Most common grade 3/4 adverse effects were febrile neutropenia (2.3%), neutropenia (1.4%), nausea (1.4%), and pneumonia (1.4%). Approximately half of the patients received at least 7 cycles [15].

The present report is the first supporting the safety and effectiveness of long-term Trabectedin administration as 2nd line treatment for ovarian sarcoma in a hemodialyzed patient. Patient has received so far 47 cycles of Trabectedin and has been on hemodialysis for 3 years, having achieved an ongoing CR that lasts for over one year. Duration of treatment exceeds those in previous case reports and case series (Table 1, refs 16-21), and also the ones that have been reported in the prospective study of Buonadonna et al. (longest time on treatment 44.2 months, and maximum number of cycles 44, for which data on sarcoma location and histology is not reported).

Lack of data on trabectedin administration in hemodialyzed patients is noteworthy. Thariat et al. [22] present an interesting case of an individualized pharmacokinetic study in a single hemodialyzed patient treated with trabectedin for a retroperitoneal myxoid liposarcoma that recurred following immunosuppressive therapy for kidney transplantation. Cmax and AUC were higher, while clearance, terminal half-life, and volume of distribution were lower in the patient compared to mean values of normal kidney function patients. The patient was reportedly on 5th month of treatment before presenting with disease progression. This is the only report in the literature supporting the feasibility and safety of trabectedin administration during hemodialysis for end-stage kidney disease.

Similarly, Moe et al. [23] report the case of a patient on peritoneal dialysis receiving treatment with trabectedin after end-stage kidney disease caused by ifosfamide therapy for a metastatic high-grade spindle-cell sarcoma. Trabectedin was not detectable in the peritoneal dialysates and no serious adverse effects were observed. The patient received 6 cycles before presenting with disease progression. In both cases, low dialysis clearance, as well as the absence of detectable trabectedin in the dialysate samples, implies that trabectedin is not efficiently cleared either by hemodialysis, or by peritoneal dialysis.

The present case indicates that durable complete responses can be achieved with trabectedin therapy in such patients. In this regard, more pharmacokinetic studies are needed, as cancer incidence and recurrence are high in end-stage kidney disease patients and trabectedin appears to be an attractive option for sarcoma treatment in this group.