Objective: The present study aimed to evaluate the potential benefits of ultrasonographic (USG) assessment in the diagnostic workup of children suspected of having celiac disease and its correlation with tissue transglutaminase (TTG) antibody assay.

Materials and methods: A retro-prospective study, consisting 30 children with biopsy proven celiac disease diagnosis, was conducted. The tissue transglutaminase (tTG) assay was done on all the children, and further the children were subclassified based on the tTG titer values. The transabdominal sonography using convex (3-5 MHz) and linear (7-12 MHz) ultrasound probes was carried on the subjects, assessing the bowel lumen dimeter, bowel wall thickness, abnormal rugal folds count, presence of perihepatic fluid, fatty hepatic changes and mesenteric lymphadenopathy. Routine abdominal sonography was also carried out to complete the detailed evaluation of the abdomen. The sonographic bowel findings and the different classes of the tTG titers were correlated.

Conclusion: Ultrasound is the most widely used first imaging tool in the evaluation of abdominal ailments. Multiple small bowel abnormalities are found in the celiac patients, which may vary according to the study population’s demographic and clinical features. More than half of the children with celiac disease showed small bowel abnormalities, and small bowel thickening, if present, may vary with the anti-tTg titer level. Multicentric and large size sample studies are required to accurately assess the association of serological antibodies titers with the bowel wall abnormality.

Celiac disease is an autoimmune entity affecting the small intestine. The genetically predisposed subjects mount immune-inflammatory reactions towards the dietary gluten and related proteins- withdrawal of the gluten diet aids in diagnostic as well as therapeutic purposes of the celiac disease. The European medical centers have excellently reported the prevalence of the celiac disease, including the “silent celiacs” ranging from 1:80 to 1:300 children [1, 2]. The recent literature from the non-European countries has also reported the presence of similar genetic make-up like that of the western population, suggesting the possibility of development of celiac disease when exposed to the gluten proteins. The prevalence of celiac disease from the developing countries is underestimated due to the non-availability of the diagnostic facilities and under-equipped health care system. The genetic basis of the disease is linked to the gene loci HLA DR3-DQ2 and DR4-DQ8 and high frequency of intrafamilial occurrence of the celiac disease [3]. In the past, celiac disease was considered on infants and young children presenting with chronic diarrhea, malabsorption, and failure to thrive, a where-as recent trend in the celiac disease presentation has changed with the inclusion of milder and non-gastrointestinal manifestations between 10-40year of age, by the availability of advanced diagnostics techniques like serological assays and endoscopy [4]. Screening with the serological assay of tissue transglutaminase (tTG) to be offered to the symptomatic children and the high-risk group people regardless of symptoms, on gluten diet and these high-risk groups include European population, Down's syndrome, 1st and 2nd-degree relatives of celiac disease subjects, IgA deficiency, autoimmune thyroiditis, Turner's syndrome and William's disease subjects [5]. The probable diagnosis of celiac disease is considered when children with classic symptoms, test positive for tTG-IgA antibody assay and with endoscopic and duodenal biopsy findings of celiac disease, with exposure to gluten diet. Resolution of the mucosal findings and normal serum tTG- IgA antibody assay on withdrawal of gluten diet confirms the diagnosis [6].

The early recognition of the celiac disease and withdrawal of the gluten diet offers a child to be immune to the malnutrition and its consequences and secondary malignancy [5]. In the evaluation algorithm for the celiac disease, the radiological investigations, including the sonography, computed tomography (CT), and magnetic resonance imaging (MRI), are not employed as diagnostic modalities, rather these are utilized for monitoring the complications of the celiac disease [7, 8]. In the radiology literature, the barium enema features of the celiac disease have been well documented and the same features are extrapolated to the findings of the other modalities [9, 10]. In the literature, various findings of the bowel and abdomen abnormalities (including the bowel dilatation, bowel wall thickening, peristalsis, decreased rugal folds, abdominal free fluid and raised hepatic echotexture) were described on ultrasonological evaluation of the celiac diseases, which are non-specific to the disease entity parse, but when present cautioning the further evaluation abnormality with serological assays to detect the celiac disease early. The present study was attempted to find the diagnostic performance of the several ultrasound signs with the tTG-IgA titer levels in the biopsy-proven cases of celiac disease.

The present study aimed to evaluate the potential benefits of ultrasonographic (USG) assessment in the diagnostic workup of children suspected (biopsy proven) of having celiac disease and its correlation with tissue transglutaminase (tTG) antibody assay.

A retro-prospective, descriptive study was conducted on the biopsy-proven celiac disease children, in the Radiology section of the Department of Pediatric Gastroenterology. For the study purpose, thirty (n=30) children, with positive tTG-IgA (IgA antibody against tissue transglutaminase) assay and biopsy-proven celiac disease (all are Marshal grade III), were recruited. Informed consent was obtained from the respective guardians of the children, and the ethical clearance from the Institute's Ethical Committee, PGIMER, Chandigarh was obtained.

The tTG level more than 20 U/ mL were considered positive, and these positive subjects were further subclassified into the 3 subclasses based on the level of IgA antibody titer which is described below [11]:

All the children underwent endoscopy guided biopsy of the duodenum for the diagnostic purpose, endoscopy findings, and modified Marsh grading for the biopsy specimen were documented and descriptions of the same findings are enlisted below [12]. 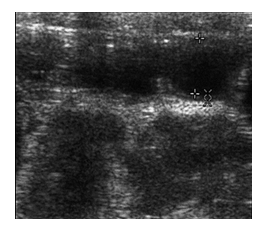 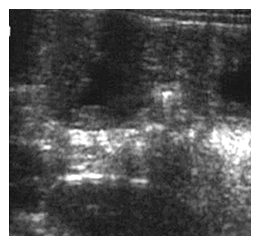 Figure 3: Ultrasound (linear probe) evaluation of the abdomen revealing bowel within in bowel in one of the jejunal loops suggestive of small bowel intususception in longitudinal (A), and axial (B) plane with a few hypoechoic nodules in mesentery at inferolateral to the bowel loop consistent with mesenteric lymphnodes. Repeat abdominal sonography after 2 hours revealed resolution of telescoped bowel loops. 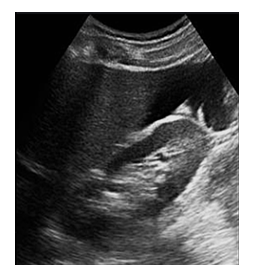 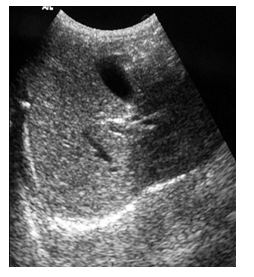 Data were entered in Microsoft Excel Sheet and analyzed using SPSS software (version 25). The quantitative variables like age and tTG were summarized as median (IQR). All the other qualitative variables were presented as percentages (proportions). Association of the tissue transglutaminase class with bowel findings was assessed using the chi-squared test. A p-value of less than 0.05 was considered statistically significant.

Table 3: Association of tissue transglutaminase class with sonographic bowel findings among children with celiac disease included in the study (N=30).

The endoscopic guided duodenal biopsy is the gold standard test for the diagnosis of celiac disease in children. The yield of biopsy specimens may be inadequate at times due to patchy inflammation of the small bowel in celiac disease and inadequate harvest, and the procedure is invasive. The systemic review and meta-analyses have proved the superior role of tTG assessment over endomysial antibody (EMA) and anti-gliadin tests for screening, diagnosis, and follow-up of the children with celiac disease. Currently, the European Society for Pediatric gastroenterology, hepatology and nutrition (ESPGHN) recommends no endoscopic biopsy for diagnosis of celiac disease, when symptomatic children serology reveals anti tTGs titer >10 times the upper normal limit, with positive EMA and HLA DQ2/ DQ8 status [16].

Multiple small bowel abnormalities including small bowel thickening, fold abnormality, transient intussusception, dilated bowel loops, abnormal mesenteric vasculature, hepatic steatosis, and mild ascites have been reported by the multiple studies. We observed small bowel abnormalities in 17 (56.66%) children with biopsy-proven celiac disease, and 13 children showed no abnormality at all, as compared to our observation the Riccabona et al. [19] has reported a high proportion of subjects 36/39 (92%) of the children demonstrating bowel abnormalities with overt malabsorption, and D Bertusek et al. [20] reported sonological abnormality in 68% of the subjects. The demographic and clinical variability of the subjects included in studies might have given rise for such difference, as only the overt malabsorption children were included in Reccabona et al. [19], whereas 40% of the study population included in our study was suffering from some form of malnutrition. We found increased bowel wall thickening, hyper-peristalsis, transient intussusception, and reduced jejunal folds were the abnormal small bowel features found in 8 (26.6%), 4 (13.3%), 5 (16.6%), and 5 (16.6%) subjects respectively. D Bertusek et al. [20] reported combined abnormal bowel features including bowel wall thickening, reduced fold height and fold pattern reversal in 90% of the subjects, followed by irregular peristalsis and bowel invagination in 79% and 30% of the subjects respectively. Rettenbacher et al. [21], has reported the thickening of the bowel loops and hyperperistalsis in 63.63% and 72.72% of the adult celiac disease [21]. The Rettenbacher et al. [21], reported dilated bowel in 8/11 (63.6%) and fluid-filled bowel loops in 11/11 (100%) of the study subjects, which was not found in any of the subjects included in our study. Inclusion of adult celiac patients, prolonged duration of the inflammation and associated mucosal changes, and small sample size in the Rettenbacher et al. [21], could have contributed to slightly high reporting of bowel thickening and hyper-peristalsis abnormality and fluid-filled dilated bowel loops. Analysis focusing on the possible association between the anti tTG titer and bowel abnormality revealed a significant association between the anti-tTg titer and jejunal wall thickness with a p-value of 0.009. No other abnormal bowel parameter was statistically significant; however, their respective P values are reported in Table 2. No study has compared the anti-tTG titer with fluoroscopic or sonological bowel abnormalities to compare and contrast our findings.

Extra-intestinal abnormalities like fatty liver changes, mesenteric lymphadenopathy, and mild peritoneal free fluid were observed in 23 (76.6%), 6 (20%) and 4 (13.3%) of the subjects, and the similar abnormalities were reported by Rettenbacher et al. [21], in 6/11 (54.54%), 5/11 (45.4%) and 9/11 (81.8%) of the adult celiac patients respectively. The reason for dissimilarities encountered in comparison to Riccabona et al. [19], D Bartusek et al. [20] and, Rettenbacher et al. [21], is unclear, the age of presentation, age of the study of population, duration of the symptoms, and severity of the symptoms and dietary practice of the subjects might have contributed for the difference.

This study has certain limitations, firstly, the sample size of the study population is small, which may reduce the power of the study. Secondly, it was a single-center study. Hence it requires validation from the multicentric reports to directly utilize in daily clinical practice. Thirdly, no pre-procedural (USG) oral administration of the specific contrast agent was done, the practice which was reported superior in assessment of the small bowel loops by the Cittadini G et al. [22].

Ultrasound is the most widely used first imaging tool in the evaluation of abdominal ailments. Multiple small bowel abnormalities are found in the celiac patients, which may vary according to the demographic and clinical features of the study population. More than half of the children with celiac disease showed small bowel abnormalities, and small bowel thickening, if present, may vary with the anti-tTg titer level. Multicentric and large size sample studies are required to accurately assess the association of serological antibodies titers with the bowel wall abnormality.