Dermoid cysts are benign growths that develop from ectodermal components [1]. Similar to a simplistic teratoma, these dermoid cysts are often composed of sebum, keratin, and hair [2, 3]. Dermoid cysts typically present along midline of the head and neck with limited record of cases involving the infratemporal fossa [4]. One review describes less than 20 cases of dermoid cysts occurring in the lateral frontotemporal region with a sinus tract and bony involvement. Of the 20 cases described, only seven had intracranial extension [5]. Another larger series reviewed a total of 280 cases involving orbital and periorbital dermoid and epidermoid cysts, and found that the periorbital location accounted for more than 50% of all cases reported in the head and neck region [6]. Notably, dermoid cysts with extension into the temporal fossa were only seen in 5.7% of the cases in the series. Additionally, subperiosteal dermoid cysts were most destructive due to bony invasion [6].

We describe an 8-year-old male with a history of recurrent drainage since near birth from the left lateral periorbital region who was followed by his PCP and had now developed headaches that centered around the lesion. The patient was initially referred to General Surgery and a contrasted CT scan was obtained revealing of a 2 cm lytic lesion with sclerotic borders invading the lateral orbital wall along with soft tissue enhance overlying the defect (Figure 1B-D). This lesion was further characterized with an MRI prior to referral for Neurosurgery evaluation. MRI findings were notable for a diffusion restricting T2 hypertintense lesion associated with an overlying soft tissue enhancing lesion superior to the temporalis muscle with concerns for inflammatory changes within the muscle itself (Figure 1A) which was concerning for a dermoid cyst.

The patient was taken to the operative theater as a combined case between Neurological and Plastics Craniofacial surgery. An incision was made at the margins of the discolored skin (Figure 2A) and excised revealing of a stalk-like fibrotic stalk that appeared to extend through the soft tissue into the lateral orbital wall of the sphenoid wing to connect to a large cystic mass (Figure 2B). Thick yellow content was easily expelled with manipulation of the mass and this fluid was sent for culture (Figure 2C). The margins of cyst were delineated from the underlying bone and the entire lesion including the stalk was grossly resected (Figure 2D). The cavity was cauterized to ensure no tissue remnants to avoid recurrence. A vascularized fascial graft was excised and used to fill the bony defect prior to closure. 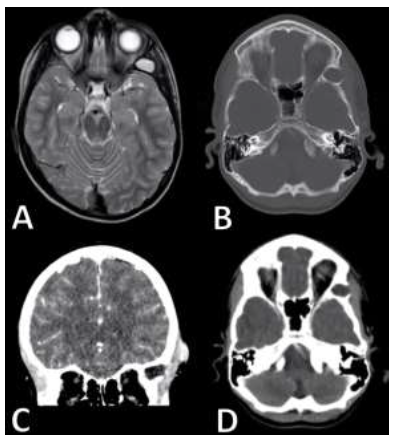 Figure 1: A: T2 Axial MRI findings notable for a diffusion restricting T2 hypertintense lesion associated with an overlying soft tissue enhancing lesion superior to the temporalis muscle with concerns for inflammatory changes within the muscle itself. 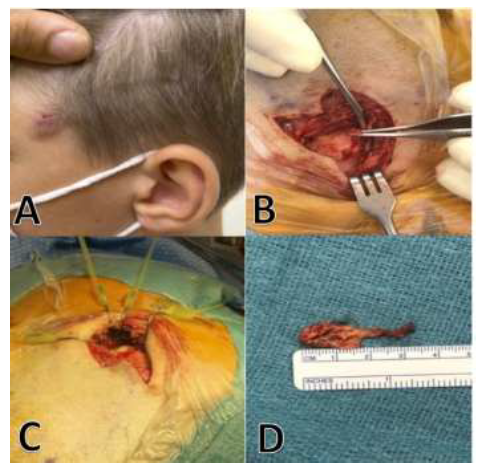 In a series of 280 cases of periorbital and orbital dermoid cysts, only 16 (5.7%) lesions were found to be bilobed and all of which involved the temporal fossa6. Similarly, other reports of bilobed dermoid cysts have arisen in the temporal fossa and one of which was associated with a draining sinus tract [7, 11]. Taken together, dermoid cysts within the temporal fossa are associated with findings not easily discerned on routine physical examination. Though some reports have noted good outcomes after resection of simple lesions without preoperative imaging, there are increasing reports noting the extensive involvement of frontotemporal dermoid cysts. We propose that preoperative imaging be obtained for all lesions concerning for a dermoid cyst to guide operative planning and ensure an appropriate multidisciplinary approach is utilized when warranted. Prior studies have noted physical exam findings that are more concerning for extensive involvement including immobility, drainage, erythema or concern for intraorbital extension. In this case, the patient had an immobile, erythematous draining lesion at time of presentation. However, imaging was delayed until the patient complained about headaches and pain with chewing. It is likely earlier imaging would have identified the lesion with potentially less invasive features.

The deep culture that was obtained intraoperatively reportedly demonstrated skin flora, supporting the observed finding that the cutaneous lesion appeared to extend completely and invade the left lateral orbital wall forming a sinus tract with an associated bilobed pterional dermoid cyst. The aforementioned case series suggests early removal of all dermoid cysts resulting in bone changes along with imaging to rule out dumbbell or subperiosteal extension, such as the dumbbell cyst seen in our report [6].

The lateral frontotemporal region with a sinus tract with dumbbell dermoid cyst is rare. Due to its infrequency, preoperative evaluation may be misguided for potential adverse outcomes. Therefore, early thin sliced head/orbital CT with 3D reconstruction along with referral to neurosurgery and/or cranofocial plastic surgery is recommended. This case highlights the importance of preoperative imaging for all lesions concerning for a dermoid cyst as a guide for operative planning and ensure optimal management. Preoperative imaging can be revealed extent of bony erosion, abnormal lesion shape and intracranial or intraorbital extension. Finally, in agreeance with the reported literature, we recommend early removal of dermoid cysts in their entirety when possible, which too can be dependent on appropriate preoperative planning in the setting of extensive adjacent involvement.

The authors declare that there are no conflicts of interest.