Desmoid Fibromatosis Presenting as An Omental Mass: A Case Report

Intra-abdominal desmoid fibromatosis (IADF) is a rare condition, comprising 8-15% of all presentations of desmoid fibromatosis (DF), most commonly arising from the small bowel mesentery. We report the case of a 34 year old male, who presented with a 7.4 x 6.5 cm right iliac fossa mass arising from the omentum. Percutaneous biopsy was inconclusive and the working diagnosis was desmoplastic small round cell cancer of appendiceal or urachal origin. He underwent a diagnostic debulking procedure; a dominant omental mass was removed and 2-3 mm peritoneal nodules on the distal small bowel mesentery and a bulky mass around the root of the superior mesenteric vessels were noted. Histopathological, immunohistochemical and gene mutation analysis confirmed IADF as the definitive diagnosis. We review the literature of this rare presentation and discuss challenges in diagnosis and subcategorization of DF.

Our patient is a 34 year old Caucasian male. He initially presented with four months history of diarrhea and weight loss. Clinical examination revealed a right sided lower abdominal mass and a CT scan noted an omental mass in the right iliac fossa measuring 7 x 2 cm with stranding and nodularity in the surrounding tissues. A colonoscopy and an oesophagogastroscopy were clear of any abnormality. An initial USS guided biopsy was inconclusive. His medical history included depression and anxiety although he was not on any medication. His only surgical history was a hand tendon repair at the age of 4. He has no family history of Familial Adenomatous Polyposis (FAP) and/or Gardner syndrome and there was no history of abdominal trauma.

After a 12 month period of observation he was referred to our hospital with progressive abdominal pain and mass in the RIF. A second CT scan demonstrated a 6.8 x 2.7 cm (axial) x 7.5 cm (craniocaudal) mass arising within the omentum, with soft tissue nodules extending along the anterior abdominal wall peritoneum to the level of the urinary bladder. In addition, there were areas of abnormal soft tissue nodularity in the left upper quadrant and tissue surrounding the superior mesenteric vessels. There were no size significant abdominal or pelvic lymph nodes and no free fluid. No source of a primary neoplasm was identified. Tumor markers: CEA, CA15.3 and CA19.9 were within normal ranges. A pathology review of the previous biopsy showed findings suggestive of a sclerotic process and a diagnosis of desmoid fibromatosis was proposed, but definitive diagnosis was not possible on the limited tissue available. Given the rarity of omental disease associated with DF, concerns remained that this could represent peritoneal surface malignancy. Following a Multidisciplinary team (MDT) discussion it was greed that a formal resection of the omental mass would relieve symptoms and confirm a definitive diagnosis.

He underwent a laparotomy were the omental mass was confirmed and removed. Diffuse nodular deposits along the distal small bowel mesentery and thickened tissue around the superior mesenteric vessels at the root of the mesentery were confirmed. Nodularity extended along the peritoneum to the dome of the bladder along the line of the urachus and this was excised en bloc. His appendix appeared grossly normal but was removed to exclude primary appendiceal pathology. He recovered well and was discharged without complications 5 days following surgery.

Histopathology demonstrated features of a desmoid-type abdominal fibromatosis (Figure 1a) with most areas showing near total hyalinisation (Figure 1b). The urachal tissue and appendix were normal. The lesional cells were positive for smooth muscle actin (SMA) (Figure 1c), whilst Desmin, ALK1, DOG1, CD117, and Beta-catenin nuclear staining were all negative. CTNNB1 gene mutation analysis by PCR and restriction enzyme digestion (exon 3) was negative for the 3 most common substitutions (p.T41A, p.S45P and p.S45F).

Follow up 6 months after surgery noted that his symptoms had settled. Consideration has been given to treatment with Cox 2 inhibitors but the patient has elected for surveillance rather than active treatment. He has been referred for genetic assessment and counseling. 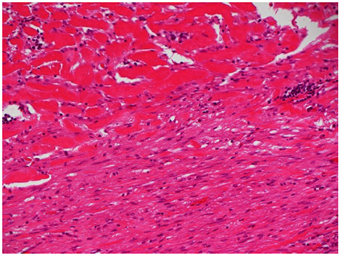 Figure 1a: Fibromatosis showing transition between a cellular region (bottom half) and a paucicellular hyalinised area (top half). The cellular region comprises long sweeping fascicles of bland looking spindle cells. 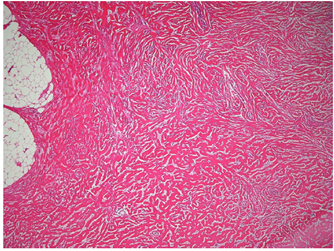 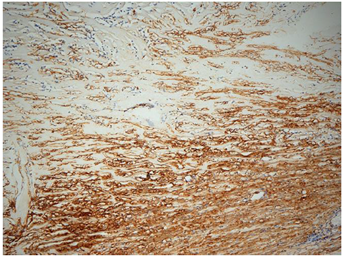 Figure 1c: The spindle cells are positive for SMA.

Desmoid fibromatosis (DF) is a rare, locally aggressive condition that comprises 0.03% of all neoplasms commonly presenting in the soft tissues of the trunk and limbs in the 25-35 year age group [1-4]. DF accounts for <1% of intra-abdominal tumors when it is described as Intra-abdominal fibromatosis (IAF), and arises most commonly within the small bowel mesentery; retroperitoneal fibromatosis is a second notable site. IAF has a 2:1 predilection towards younger females, possibly due to estrogen influence [1, 2, 5, 6]. Although its course is often indolent it is unpredictable, and can lead to fatal outcomes due to local progression in the mesentery leading to enteric dysfunction and malnutrition [1, 7]. Risk factors include previous trauma, abdominal surgery, pregnancy and family history of DF. Although usually sporadic, specific genetic profiles are associated with IAF namely Familial Adenomatosis Polyposis (FAP) and Gardner Syndrome due to APC germline mutations [8, 9].

Diagnosis is usually established by histopathological examination, however it can be challenging to exclude other spindle cell tumours including gastrointestinal stromal tumors (GIST), hence immunohistochemistry is commonly employed to assist with defining the cellular subtypes [10, 11]. IAF stains positive for vimentin and SMA, and nuclear beta-catenin staining supports the diagnosis. Desmin, cytokeratins, and S-100 are usually negative. Next-generation mutation analysis sequencing is reported to be highly sensitive (92%) and specific (100%) for the detection of CTNNB1 mutations in sporadic desmoid-type fibromatosis and may be used to direct therapy with COX 2 selective inhibitors [12-16]. FAP/Gardner’s syndrome related tumours harbor mutations in the APC tumour suppressor gene and do not have CTNNB1 gene alterations [15]. Table 1 shows the most common histological differential diagnoses and their immunohistochemical staining profiles [17-19].

Treatments for IAF include observation, COX 2 selective inhibitors, systemic anthrax-cycline based chemotherapy, and radiotherapy. However as some cases spontaneously resolve asymptomatic patients should undergo a period of observation once diagnosis has been established. Surgery should be directed towards diagnosis and reserved for symptom relief as radical resection is likely to result in a poor quality of life. Active surveillance showed similar 2-year event free survival compared to surgery [20, 21]. The role of selective COX 2 inhibitors has been studied in tumors with COX 2 expression, as it can potently induce anti-tumor responses by both COX-2 dependent and independent mechanisms, on the basis of CTNNB1 and APC mutations, as they are part of the Wingless/WNT signaling pathway which results in accumulation of β-catenin which triggers COX 2 contributing to tumorigenesis [16].

To date, only 7 cases of omental IADF have been reported [22-28]. As in this case, patients usually present with vague abdominal symptoms and an abdominal mass. Imaging with CT and US can be helpful in defining the anatomy and determining multifocal deposits but diagnosis requires histopathological and immunochemical analysis. Differential diagnosis includes mesenteric panniculitis and sclerosis, retroperitoneal fibrosis and gastrointestinal stromal tumors [22].

This case presented a diagnostic challenge relating to its presentation as a predominant omental mass and inconclusive pathology at biopsy. Clinically a urachal primary with peritoneal metastases was a more likely diagnosis than IAF. At laparotomy in the absence of a definitive diagnosis concern remained that the patient had peritoneal malignancy with unresectable disease around the mesenteric root hence it was judged best to obtain definitive pathology rather than undertake more radical surgery.

The second challenge was that the immuno-staining profile did not conform to that expected in IAF. DF usually shows nuclear staining with beta catenin (80%) which was not the case here. This resulted in the need for gene mutation analysis for CTNNB1 which was also negative. CTNNB1 mutation is seen in 90-95% of cases of sporadic desmoid tumours. The lack of CTNNB1 mutation is seen in DF related to Gardner’s syndrome with the APC gene mutation [17]. This raises the possibility of an APC genetic mutation in the absence of clinical FAP/Gardner’s syndrome in our patient, hence genetic assessment with APC mutation analysis and counseling is warranted and ongoing.

There are only 7 prior cases of omental IADF reported in the literature. More common causes of an omental mass include metastases from gastric, colorectal, ovarian and appendiceal cancers which must be excluded with such a presentation. Diagnosis required tissue for immunohistochemistry which although often derived from nonsurgical intervention, surgical biopsy with limited resection may be necessary. Once diagnosed, non-surgical treatments can directed toward patients' symptoms and more sophisticated genetic markers may be helpful in directing therapy.