Critical limb ischemia (CLI) is one of the most severe manifestation of peripheral arterial disease, and that is associated with a high risk of limb loss and cardiovascular events. Angioplasty can reduce the rate of the amputations, but the number of the failures are high due to the existence of chronic total occlusions (CTOs) and the insufficient collateral flow. Transradial access is safe and effective alternative for iliac artery interventions, but the rate of minor vascular complications are high due to the current sheath size [1]. Distal radial artery access can be applied for peripheral interventions and the technique is related to less radial artery occlusions [2, 3]. However this process has not been published for iliac artery interventions yet. In case of complex iliac artery CTO’s dual access might be necessary. The alternative retrograde access route can be femoral, popliteal and pedal access [4]. The cause of failure can be failed guidewire or ballon passage, or more often failed reentry. Our case describes a dual iliac artery CTO recanalisation utilizing distal radial and pedal artery access with dual balloon dilatations due to the failed anterograde reentry.

A 70-years-old male patient with CLI had been presented for lower limb angiography. He had ischaemic rest pain and several comorbidities, such as diabetes mellitus, hyperlipidaemia, hypertension and obesity. During a physical examination the left femoral artery was not palpable as well as distal pulses. Angiography was performed from radial artery access, revealed left external iliac artery (EIA) occlusion with severe superficial femoral artery stenosis and good distal run-off (Figure 1). 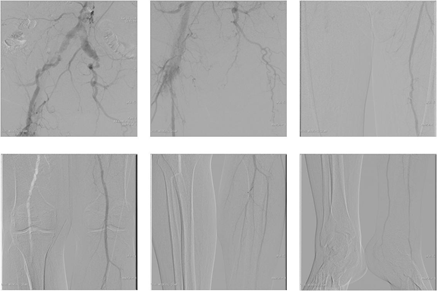 After the vascular team consultation, we have started retrograde iliac artery recanalisation from transpedal access and anterograde angiographic control from radial access. The left distal radial artery was punctured under ultrasonography guidance (Figure 2A), and a long pig-tail catheter was placed in the left common iliac artery. The posterior tibial artery was also punctured by ultrasonography guidance (Figure 2B) and the pedal artery was cannulated with a transpedal micropuncture sheath (Cook Co, USA). After the selective below-the-knee angiography, the superficial femoral artery lesion was passed with a Progress40 coronary guidewire (Abbot Co, USA) using CXI Support Catheter (Cook Co, USA). The distal EIA was passed with an Asahi Halberd guidewire (Asahi, Japan) using an Armada18 6x100 mm balloon (Abbot, USA) as an active support (Figure 2C). Distal reentry was tried with guidewire tip modification, but after the unsuccessful reentry we tried to penetrate the CTO cap with an Astato30 (Asahi, Japan) penetration guidewire.

We have also tried to penetrate the proximal cap from distal radial access using 120 cm long multipurpose catheter, ut the reentry was also unsuccessful (Figure 2D). We have dilated both subintimal spaces separately, and later simultaneously (Figure 2E). Finally, we could penetrate the dissection flap from the radial access and we have externalised the guidewire in a 5F guiding catheter through the transpedal sheath (Figure 2F). We have changed the introducer sheath for a 6F Glidesheath Slender (Terumo, Japan) and then a balloon angioplasty was performed in the SFA, in the CFA and in the EIA, too with an Armada18 6x100 mm balloon. After the balloon dilation we deployed a 7x100 mm Supera stent in the EIA and in the CFA and we also deployed a 6x100 mm Supera stent in the SFA from transpedal access. Finally, angiography showed no residual stenosis (Figure 2G) and postprocedural transpedal blood pressure was 120 millimeters of mercury. 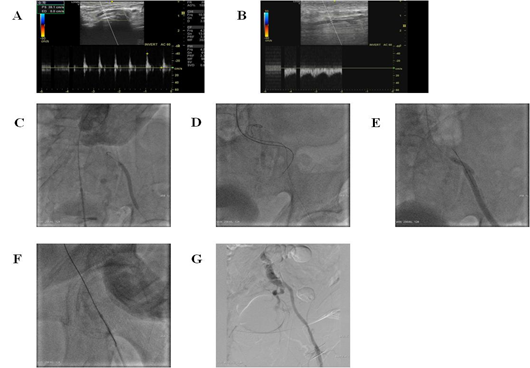 According to the lesion and the guidewire, there are several types of endovascular techniques to crossing CTOs. Ideally, the lesion is traversed intraluminally but in some specific cases subintimal angioplasty is preferred. From anatomical point of view CTOs have proximal and distal fibrous caps. The distal caps are usually softer than the proximal caps (it contains lower concentrations of collagen and calcium) so if the guidewire does not cross the CTO from the antegrade approach the retrograde approach can be an alternative strategy because of the easier penetration of the distal cap. In our case the CTO recanalisation was started from transpedal access, but due to the unsuccessful reentry the rendezvous technique was used combining distal radial and pedal technique. Distal radial access is associated with low rate of radial artery occlusion due to the easy haemostasis, and in the case of occlusion the hand circulation is more stable than during conventional radial artery occlusion [2, 3, 5].