Citation: Kazuo Maeda. Do Not Test The Safety of Diagnostic Ultrasound Attaching The Probe to Pregnant Small Animals. Archives of Clinical and Medical Case Reports 3 (2019): 55-58.

restricted. How shall we do? Heating artifact is analyzed in this report as an answer.

The temperature of transvaginal ultrasound probe was limited below 41℃, Abdominal diagnostic ultrasound probe may be heated 41°C because its structure is the same as a vaginal probe. Animal fetus will be heated until 41°C via mateｒnal abdominal wall, if the probe is directly attached maternal animal abdomen, while there is limitation of time to be heated without hazardous effect.The heat exposure time was limited by following equation by by National Council on Radiation Protection and Measurement (NCRP);

T is the maximum anticipated temperature (T in °C), t is the duration of the exposure time (min).

As T is 41°C, t should be shorter than 4(43-41)=42=16 min, namely, duration of 41°C temperature exposure should be less than 16 min to obtain normal outcome [1]. Thus, the small pregnant animal should not touch the ultrasound probe for 16 or more min, where the migration of neuronal cell was delayed, when the probe was attached to the animal for 30 min [2], where heating time was definitely longer than 16 min. It is natural to develop fetal abnormality due to heating artifact. Although the equation 1 was presented to study the thermal index of diagnostic ultrasound, the same temperature rise time is discussed also in the estimation of heating artifact in this report (Figure 1). 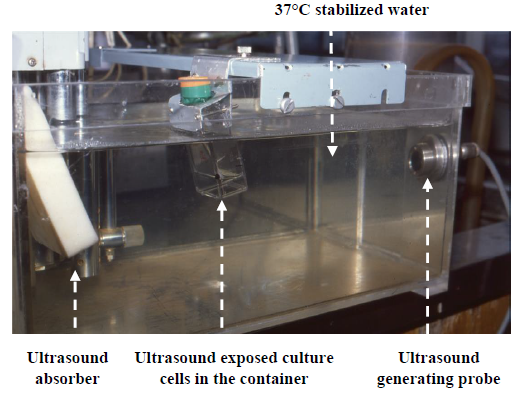 Figure 1: Experimental ultrasound  was exposed to the subject, but avoiding the heat of ultrasound probe with 37℃ stabilized water in Japanese study group of diagnostic ultrasound safety in 1970s. No anomaly developed after exposure of pregnant animal with intense ultrasound using the system.

Ultrasound probe attachment was unknown in another ultrasound exposure experiment [3], The abnormality after short exposure of Doppler ultrasound to fetal animal was transient increase of hepatic cell apoptosis, however, the phenomenon can appear by other reasons, thus, it is difficult to decide to be caused limitedly only by ultrasound exposure [4]. It is natural to achieve abnormal outcome after thermal artifact exposure longer than the equation of NCRP report [1]. It is hoped to avoid heat artifact longer than the limit of NCRP. The radical method to avoid probe heat artifact is to insulate the probe heat with 37°C stabilized water, then experimental subject is exposed only to ultrasound, but not to heating artifact of the ultrasound generating probe. Small pregnant animals and growing cultured cells were exposed to ultrasound without heating of ultrasound probe in the Japanese national ultrasound safety study group in 1970s. Anomalous animal fetus did not develop, and the threshold of cultured cell growth suppression was 240 mW/cm2 , which was the thermal index (TI)=1 intensity level which is the threshold of clinical ultrasound exposure [5]. As human pregnant uterus is large in size filled with amniotic fluid, thus, no abnormality is expected in human case with diagnostic ultrasound exposure.

A researcher to test the safety of diagnostic ultrasound safety should not attach the probe to pregnant small animal abdomen, but should test the experimental radiation within safe temperature limit, or totally shut off the heat with 37°C stabilized water, purely radiating the ultrasound without heating experimental animal with ultrasound probe. The limit of ultrasound exposure was tested by the growth curve suppression of cultured cells where the threshold was 240 mW/cm2 under the heat insulation with 37°C stabilized water [5], and threshold ultrasound intensity was the level of Thermal Index = 1. Fetal animal exposure was also done in the same radiation environment developing no anomaly in the 1970s experimental ultrasound group.

Present trend of ultrasound safety is “As low as reasonably achievable (ALARA) principle” by which further ultrasound safety is expected, e. g. our actocardogram ultrasound is 1 mW/cm2, which separates physiologic sinusoidal from pathologic one, that was unable by the CTG. Undisturbed pulse Doppler flow wave was recorded by 0.1 Thermal Index intensity [6], which was around 1/10 of 240 mW/cm2=20mW/cm2, which was CW ultrasound intensity, by which the author recorded world first CW Doppler fetal arterial blood flow wave by using own frequency demodulation system at the sound output of Doppler fetal heart beat listener Doptone, where the CW ultrasound intensity was 20mW/cm2, by which CW Doppler fetal arterial flow wave was traced too[7].