1State Hospital for Skin and Venereal Diseases of Thessaloniki, Greece

Peripheral T-Cell Lymphomas (PTCLs) are uncommon and aggressive types of non-Hodgkin lymphoma. According to the 2016 WHO classification of Lymphoid Neoplasms, 29 discrete types of PTCL are recognized [1], typically divided into 4 categories, including: 1) disseminated or leukemic disease; 2) nodal disease; 3) extra-nodal disease; and 4) cutaneous disease. Among them, the most common entity is PTCL-NOS, accounting for 30% of all PTCLs [2]. Cutaneous PTCL-NOS (cPTCL-NOS) are defined as involving only the skin with no evidence of extra cutaneous disease at the initial staging or as cutaneous lesions preceding systemic involvement by 6 months. Fever, night sweats and unexplained weight loss are common in people with PTCL-NOS. It can occur at any age, but it is frequently observed in people in their 60s and affects men more than women. Considering that the majority of patients are at an advanced stage at the time of diagnosis, a favorable prognosis is highly dependent on early diagnosis. We report a case of cPTCL-NOS with a persistent and rapidly expanding rash.

A 66-year-old female without significant past medical history presented in July 2020 to an outpatient surgery center with a two-week history of painful, rapidly growing plaques on her shins. The nodules partially regressed after systemic antibiotics (azithromycin), but new lesions appeared on the thighs and glutes. In February 2021 she presented to our dermatology clinic with many 2-5 cm, well but also ill-defined, squamous, red-violaceous, regular and irregular infiltrated plaques on her trunk and her extremities (Figure 1, 2). Some lesions were indurated and tender to palpation, whereas others had small areas of excoriation with crusting. She had malaise, weight loss and night sweats. A skin biopsy from the right arm revealed numerous small and medium sized (Figure 3) monomorphous CD2+, CD3+ (Figure 4), CD4+ (Figure 5), CD5+ CD7+ CD8- CD30- CD56- TCL-1- CD25- CD20- CD79a- Tdt- CD34- CD10- PD-1+ (Figure 4, 5) T-cell lymphoid infiltrates mainly in the dermis. Immunohistochemical staining for Ki67 expression revealed a 50% proliferative index. Subsequent molecular study showed clonal rearrangement of the T-cell receptor gene (TcRγ+). Blood cell count revealed anemia (Ht=32%), low white cell (WBC=1700 k/μL) and elevated levels of LDH (508 U/L) and ferritin (560 ng/ml). However, platelet count appeared within normal range (PLT: 171 103/μL). A bone marrow biopsy revealed no lymphoid infiltration. To rule out systemic involvement, a full body CT showed no evidence of enlarged lymph nodes. The patient did not survive to complete the planned course of chemotherapy. The term “Mature” T-Cell Lymphoma (MTCL) reflects that these cells have undergone TCR rearrangement in the thymus. For the most part, MTCLs are considered aggressive diseases and usually require multi-agent chemotherapy, and sometimes require stem cell transplantation. 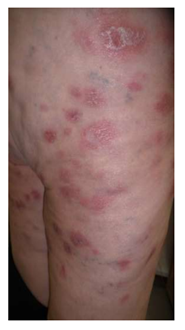 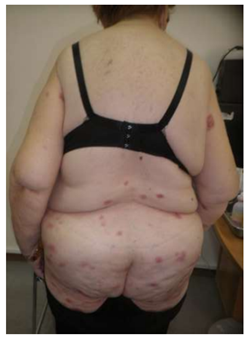 Figure 2: Clinical picture of the trunk. 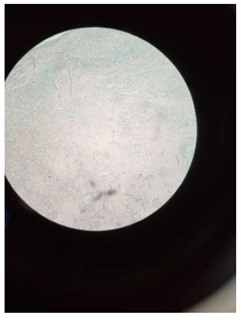 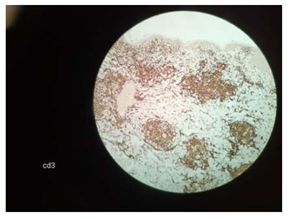 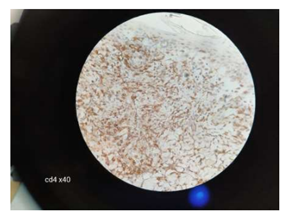 Phenotypically, PTCL-NOS show expressivity for most of the T-cell antigens which include CD2, CD3, CD4, CD5 and CD7. They usually originate from CD4 cells, but rare cases can be just CD8+, or both CD4 and CD8. The PD-1/PD-L1 pathway seems to be a potential prognostic biomarker for PTCL-NOS [3]. The presences of PD-1+ T cells in our case confirm the aggressive nature of the PTCL and further suggests its association with even more poor clinical outcomes. The diagnosis of T-cell lymphomas is highly challenging and requires an integrated approach in which clinical, morphologic, immunophenotypic and molecular data are employed.

Dermatopathologists experience the same difficulties as clinicians in the correct identification of CLD, so the cooperation between them is crucial for the prompt and correct diagnosis. In this complex context, immediate immunohistochemical studies and hematologists’ contribution are vital in the achievement of an early diagnosis. We attempt to raise awareness of the significance of including a rare underlying malignancy in the differential diagnosis when confronting a rapidly evolving eruption, along with the overall clinical deterioration of the patient. A timely diagnosis of an aggressive malignancy, as in this case, can affect the subsequent outcome.