Small cell lung cancer (SCLC) is aggressive cancer with high mortality without appropriate early treatmenr. The patient can present with paraneoplastic syndromes, such as Cushing syndrome, because of an inappropriate secretion of ectopic adrenocorticotropic hormone (ACTH) with severe hypokalemic metabolic alkalosis, Parathyroid hormone with hypercalcemia, and hyponatremia due to inappropriate anti-diuretic hormone (ADH) secretion. Patients with SCLC and paraneoplastic syndrome, are with poor prognostic factor. Diagnosis must be made early with immediate treatment. We report a 57-year-old male patient who had severe refractory hypokalemia, metabolic alkalosis, and hypertension as manifestations of an inappropriate secretion of ACTH-secreting from small cell carcinoma of the lung. He was treated with high doses of spironolactone to control the symptomatic refractory hypokalemia, and Metyrapone to control the ectopic ACTH secretion. Aggressive chemotherapy was initiated soon after lung mass biopsy, with SCLC diagnosis.

Small cell lung cancer (SCLC) expresses various enocrine syndromes such as hypercalcemia due to ectopic PTH secretion and hyponatremia due to ADH excess. The inappropriate secretion of ACTH hormone with Cushing syndrome [1-3] in patients with SCLC, generally present with electrolyte disturbances such refractory symptomatic hypokalemic metabolic alkalosis with arterial hypertension [4, 5]. 15% of cases with ectopic ACTH secretion arise from the tumor or its metastasis [1]. The patients present with cushingoid features with refractory hypokalemic metabolic alkalosis and arterial hypertension. Electrolyte disturbances rarely can be the initial presentation of the cancer. The treatment includes ketoconazole to control the ectopic ACTH secretion and spironolactone in high doses with intravenous potassium, to control the symptomatic hypoklemia. More, aggressive chemotherapy is recommended early to block the spread of the tumor, and the appearance of cuching syndrome.

Here we report a case of SCLC in a 57-year-old male presenting with severe refractory symptomatic hypokalemic metabolic alkalosis, and arterial hypertension as initial presentation.

A 57 year old man was admitted to the internal medicine department at our Center in North Israel, because of low back pain, dizziness and motor weakness in his left leg, and general weakness started 20 days before his admission.

Past anamnesis was without any illness, but he had a history of heavy smoking. One month before his last admission, he was admitted in the Orthopedic division due to low back and right leg pain, and was treated with non-steroidal inflammatory drugs such as Ibuprufen, Arcoxia). X-Ray of the right leg showing pathological fracture of the right femure, but surgical intervention for fracture fixation was postponed because of his general condition, and was discharged with symptomatic treatment and follow up.

One week before his last admission, recent peripheral edema developed with general weakness and was referred to our hospital because of severe hypokalemic metabolic alkalosis and high blood pressure, and was readmitted for further evaluation. On physical examination the patient was cachectic and dyspneic, blood Pressure 170/90 mmHg, regular heart rate of 76 /minute, temperature of 36°C, venous jugular congestion with crepitation at the basal lungs with decreased breathing. Abdominal distension with ascites and severe peripheral edema. 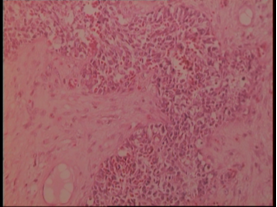 Our primary diagnosis was excess ACTH secretion with high plasma cortisol level with activation of the renin-angiotensin aldosterone axis, And consequently hyperaldosteronism according to the laboratory findings of refractory symptomatic hypokalemia metabolic alkalosis and arterial hypertension. Lung mass biopsy was perforformed with bronchoscopy, confirming the diagnosis of small cell lung carcinoma, but ACTH biopsy staining was not performed. The physiological pathway involved in the pathogenesis of hypokalemia is the mineralocorticoid effects of the cortisol excess from ectopic ACTH secretion. The normal pathway for cortisol conversion of cortisone is by the action of 11 beta-hydroxysteroid dehydrogenase for the physiological effect of cortisol under normal conditions. In our case, the high concentration of blood cortosol, there is a potent mineralocorticoid effect with severe hypokalemic metabolic alkalosis. To reduce the high cortisol level before chemotherapy, Metyparone was administered. Hypokalemia was normalized by high doses of Spironolactone and oral Potassium compound (Slow-K). Once potassium levels and the ectopic ACTH production were controlled, the patient was transferred to the oncology division for systemic chemotherapy. 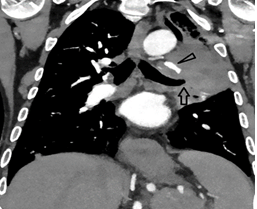 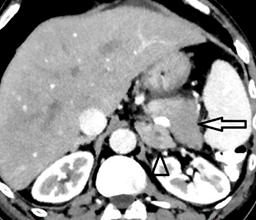 Cushing syndrome due to ectopic ACTH secretion was described in 15% of all cases of Cushing syndrome. SCLC and bronchial carcinoids account for about 50% of the cases [6-8]. The patients generally present with hyponatremia or hypercalcemia [8]. Few cases in the literature described symptomatic refractory hypokalemic as an initial presentation of small cell lung cancer. As in our case, the patient present with severe refractory hypokalemic metabolic alkalosis and arterial hypertension. Hypokalemia refractory to large intravenous potassium supplements can be one of the features of ectopic ACTH secretion with hypercortisolism. These patients usually present with high ACTH levels (>20 ng/L) and hypercortisolism which is not suppressed with high doses of dexamethasone (8 mg/day). High cortisol blood levels activate the mineralocorticoid axis with increased urinary secretion of potassium resulting in hypokalemia and metabolic alkalosis.

The treatment of choic in these conditions of ectopic ACTH secretion from lung cancer is immediate medical treatments by the glucocorticoid synthesis inhibitors such as ketoconazole or metyrapone [8]. Ketoconazole blocks corticosteroid production by inhibiting 17-hydroxylase and 11-hydroxylase, is the therapy of choice because of its low incidence of side effects. To control the refractory hypokalemia, large intravenous and oral potassium replacement and spironolactone are indicated [9, 10].

Patient with refractory hypokalemia with metabolic alkalosis and arterial hypertension with normal renin-aldosterone levels, should be suspected for ectopic ACTH secretion from malignancy especially SCLC.

No human or animal experiments were conducted.

The authors declare that there are no conflicts of interest regarding the publication of this case report.