Mechanical atherothrombectomy (MATH) with the Rotarex catheter is rapid, effective and safe technique used as an initial modality for treatment of patients with acute and subacute lower limb ischemia. Contrary to surgery or thrombolysis, this technique has not clinical contraindications and doesn´t require intensive care unit stay. Adoption of MATH has been slow, mainly due to limited experience with the technique and the low standalone efficacy of some devices, neccessitating concomitant use of thrombolysis. The purpose of this review is to present a series of acute arterial occlusions of different anatomy and locations in patients with immediately or marginally threatened extremities.This may help the reader to learn about the technique potential in a vascular emergency states associated with a high mortality and morbidity rates.

Acute ischemia of the lower limbs (ALI) is a critical vascular emergency that not only endangers the affected extremity but also puts the patient‘s life at risk. Catheter-directed thrombolysis (CDT) and/or open surgery (OS) are common therapeutic modalities but both are associated with significant mortality and morbidity rates. Serious comorbidities and cardiopulmonary complications influence postoperational outcome in patients treated by surgery with cardiopulmonary complications responsible for 54%-63% of the deaths at 30 days [1, 2]. On the other hand, the less invasive, thrombolytic treatment is more often complicated by major haemorrhage and stroke [3-5]. As a result, there is no overall difference in limb salvage or death at 30 days, six months or one year after initial surgery and/or initial thrombolysis [6]. A meta-analytic study [6] evaluating data from five randomized trials and 1283 patients reported 30-day mortality of 4.6% (0-12.3%) and 30-day limb salvage of 88% (36-91%) in thrombolysis-treated participants. In surgery patients, the 30-day mortality was 8.2% (4.9-17.5%) and 30-day limb salvage 87% (56-98%). Thrombolytic management was associated with major haemorrhage in 8.8% (0-11.8) of patients at 30 days and in the same group the stroke occured in 1.3% (0-1.8). The stroke did not accompany surgical treatment and major haemorrhage occured in 3.3% (0-5.1). The guidelines recommend surgical therapy [7-10] when the extremity is immediately threatened and time to reperfusion is critical (category II B, early III) [11]. In patients with milder symptoms (category I and II A) [11], thrombolysis is indicated. Due to risk of stroke and major bleeding, certain guidelines [12] recommend surgery over thrombolysis.

The assumption that endovascular therapy without thrombolytics can reduce the number of serious bleeding complications has led to the development of mechanical techniques with the potential for prompt removal of occlusive masses. However, mechanical removal of arterial occlusive material has not replaced the traditional treatments so far. The reasons have been mainly due to limited experience with the techniques and low efficacy of those approaches alone, which often required a combination with thrombolysis and its risk. The Figures 1-6 introduce a different anatomic types that formed a basis of acute lower limb ischemia. Some of them are complex with only a low chance for successful treatment with surgery and /or thrombolysis. The main role of the Rotarex was to remove rapidly the fragmentable occlusive masses (thrombi, emboli, atheromas) and to re-establish the blood flow. The clot removal enabled further treatment of the residual stenoses by the balloon angioplasty (PTA) and/or stenting –stentgrafting (Figures 3, 5, 7). This way, the Rotarex also created the way towards the tibal arteries where the percutaneous aspiration thromboembolectomy, PTA and stenting could be used to enhance the runoff (Figures 1, 3).

The Rotarex (Straub Medical AG, Wangs, Switzerland) is a single lumen catheter incorporating a stainless steel helix rotating at up to 60,000 rpm. The Rotarex catheters are equipped with a rotating head driven by the helix, and comprises two superimposed stainless steel cylinders, each with two lateral openings; the outer cylinder is connected to the rotating helix, and the inner cylinder to the catheter shaft. The shape of the head facilitates the detachment and fragmentation of the occlusive material together with a strong vortex created by rotation. The displaced occlusion fragments are aspirated through head openings, and, during that passage, are shredded again into debris that is transported to an external collecting bag. Adjunctive techniques (balloon angioplasty, stenting, percutaneous aspiration thromboembolectomy) can be used to treat underlying (residual) lesions after debulking. Lumen diameter >3 mm and intraluminal passage of the guidewire are the conditions necessary for the Rotarex usage. 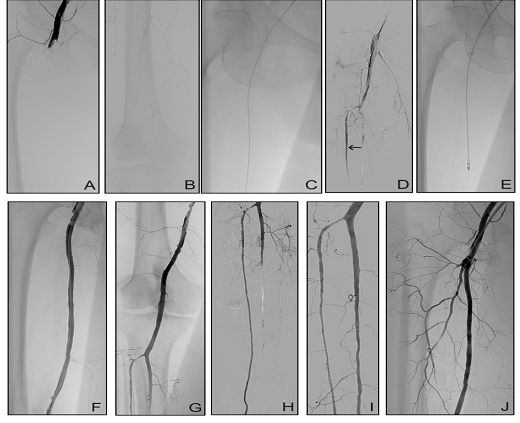 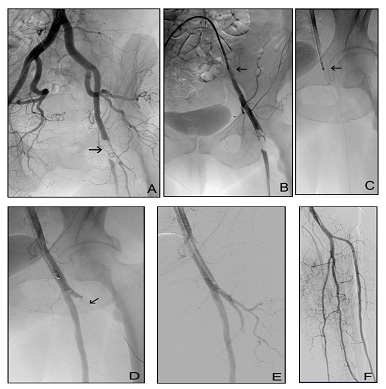 A male patient with acute left lower limb ischemia and symptoms worsening during 24 hours. The problem was initiated by squatting. At the moment of hospital admittance, the patient presented with extremity rest pain, pale and cold skin, sensory loss and moderate motor deficit. Left groin arterial pulses were palpable but a puls deficit was detected more distally. Doppler signals from ankle arteries were not audible and the value of ABI was 0. Intravenous heparin infusion was initiated before the admittance. Intervention total time was 60 minutes with 2 pasages of the Rotarex 8F catheter and its total run-time 1 minute. After intervention, acute ischemic symptoms disappeared, ABI increased to 1.0, and fasciotomy was necessary because of compartment syndrome. After 12-month follow-up, the patient lived with good function of both lower limbs and slowly healing skin defect after the fasciotomy. A patent contralateral popliteal aneurysm was managed surgically and oral anticoagulation with warfarin was chronically administered. Medical history: smoking, hypercholesterolemia (Figure 3). 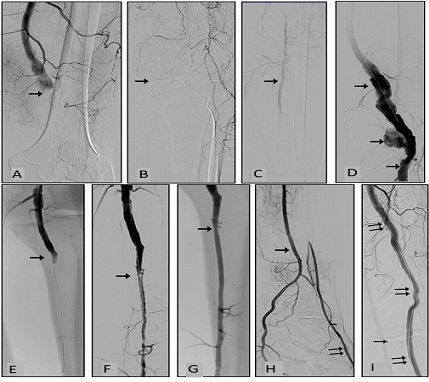 A female patient admitted to the hospital for sudden onset of bilateral lower limb ischemia lasting 1 hour. The sensorimotor deficit was profound bilaterally with cool and pale skin. Contact with the patient was worsened because of chronic cerebrovascular disease and brain degenerative process associated with long-term walking inability. Arterial pulsations were not detectable on palpation and audible by Doppler (ABI-0), the Duplex examination found both common femoral arteries patent. The foot surface veins collapsed. Intravenous heparin (100 units per kg of weight) was administered before hospital admission. Retrograde approaches from common femoral arteries were used for angiography and endovascular treatment with the Rotarex 8F. Five passes of the catheter and 2.5 minutes of the total run-time were necessary for recanalization without adjunctive percutaneous modalities. Intervention total time: 45 min. The patient was placed on Intensive Care Unit where she presented with prolonged episode of mild systemic hypotension requiring intravenous nutrition and hydration. Chronic renal incompetence temporarily worsened after the contrast material injected during endovascular procedure. Post-intervention period was complicated by bilateral compartment syndrome which did not require fasciotomy. She was discharged from hospital 19 days later to the home for elderly with prolonged health care, without symptoms of lower limb ischemia. Chronic administration of low molecular weight heparin was recommended. Later, she was lost from follow-up. Medical history: hypertension, hypercholesterolemia, recurrent brain attacks, coronary heart disease with episodes of supraventricular arrhythmias including atrial fibrillation, chronic renal incompetence, diabetes (Figure 4). 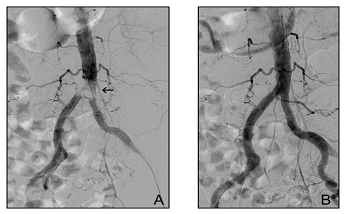 Figure 4: 81-year-old woman, ALI IIb-III. (A) Aortic bifurcation saddle embolism (arrow). (B) Angiography after embolus fragmentation and its aspiration with the Rotarex from the left groin. Balloon catheter stayed inflated in the right common iliac artery during the Rotarex run to protect the right extremity from potential embolism.

A male patient with subacute ischemia of the left lower limb and gradual shortening of claudication interval to 100 m during 2 months caused by in-stent thrombosis. Clinically, he was classified as category 3 (severe claudication) of the Rutherford classification for chronic ischemia [11] before treatment. Calf and foot skin of the affected extremity presented reduced hair and temperature compared to contralateral limb. Calf muscles volume and consistency were reduced and softer on palpation. Groin arterial pulses were palpable with no audible murmur or palpable swirl and ABI was 0.3. Endovascular intervention started with antegrade puncture of the left common femoral artery. Three passages and 1.5 min run-time of the Rotarex 8F were necessary for arterial recanalization followed by Drug Coated Balloon angioplasty and short stenting of residual stenosis. Intervention total time was 45 min. ABI increased to 1.0 and the Rutherford category improved to 0 (no claudication) after the intervention. During 12-month follow-up, clopidogrel (75 mg) and Aspirin (100 mg) were administered daily as a chronic antiaggregation therapy without reappearance of claudication or reintervention. The in-stent reocclusion of the left superficial femoral artery occured after next 17 months and it was successfully managed by the Rotarex again. Medical history: smoking, hypercholesterolemia, hypertension, carotid artery disease, peripheral vascular occlusive disease of the left lower limb with the superficial femoral artery stenting 3 years ago (and subsequent chronic Aspirin administration, 75 mg/d) (Figure 5). 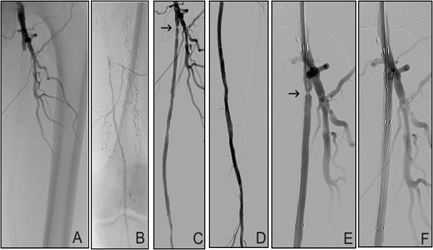 A man with acute right lower limb ischemia and the thigh claudication (100 m) lasting 48 hours as the first clinical sign of peripheral vascular disease. He presented with mild toe sensor deficit, absent rest pain, adequate skin temperature and well filled foot skin veins. Femoral and peripheral arterial pulses were not palpable and the murmur was audible above the right iliac artery in rest. ABI was 0.62 before treatment. Contralateral approach was used for angiography and endovascular treatment with the Rotarex 8F catheter. Three catheter passages were needed for recanalization, the total run-time was 1.5 minutes and intervention total time: 65 min. Acute ischemia symptoms disappeared after the therapy and the Ankle-Brachial Index increased to 1.0. Clopidogrel was administered as a chronic antiaggregation therapy and the patient is asymptomatic for 6 years. Medical history: smoking (Figure 6). 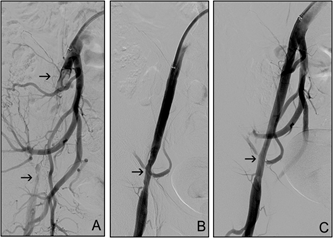 Mechanical debulking with the Rotarex offers an eligible initial therapeutic technique for patients with acute and subacute ischemia of lower limbs. It allows safe removal of occlusive material, prompt revascularization without major distant haemorrhage and without the need to place the patient in an intensive care unit. With low invasiveness, prompt reperfusion, chance for immediate treatment of underlying and concomitant lesions, together with a low rate of bleeding complications, mechanical debulking offers advantages over catheter-directed thrombolysis and vascular surgery. Debulking with the Rotarex also opens an access to infrapopliteal vessels and enables to enhance the runoff during the same procedure.