Of all primary bony tumors, chest wall is involved in only 5 – 8 % cases. Chondroblastoma and aneurysmal bone cyst (ABC) rarely occur in chest wall. Here, we would be presenting two such rare cases .One, a 26 year old male presenting with history of chest pain for 1 ½ year and other a 37 year old male with the chief complaint of pain in left shoulder for 3 years. X –ray, CT scan and MRI was done followed by guided FNAC and diagnosis of aneurysmal bone cyst in case1 and chondroblastoma in case 2 was made.

In skeletal tumors, metastatic bone tumors have the most common occurrence [1] and primary bone tumors of chest wall accounts for only 5 - 8 % of all bony tumors [2]. Of these approximately 95% occur in ribs and remainder in the sternum [3]. Fibrous dysplasia is the most common benign rib lesion followed by osteochondroma, and enchondroma [4]. Chondroblastoma and aneurysmal bone cyst (ABC) rarely occurs in chest wall. Here, we would be presenting two rare case of expansile lytic lesion of rib, one of aneurysmal bone cyst and other of chondroblastoma.

A 37 year old male came with the chief complaint of pain in left shoulder radiating to left upper arm for 3 years. On chest x- ray, PA view showed (Figure 3), a well defined heterogenous round opacity in left lung field ,occupying the upper zone. Rest of the bilateral lung field was normal. On Axial CECT chest, mediastinal and lung window (Figure 4A and 4B) revealed a well defined expansile lytic lesion involving the left first rib on anteromedial aspect ,extending from 1st costochondral junction upto the angle of rib, measuring ~ 6.2 × 4.9 × 4.5 cm ( AP × CC × TR). There is incomplete peripheral rim of thin cortex , which was interrupted at places. The lesion was projecting towards pleura into thoracic cavity and anteriorly into the chest wall. No infiltration was noted into lung parenchyma or chest wall. Findings were suggestive of benign lesion likely chondroid origin. On Axial MRI T2W image (Figure 5), the lesion showed T2 hyperintensity consistent with chondroid matrix. USG guided FNAC was done. Figure 6A (Giemsa 400X): demonstrate mononuclear chondroblastic cells, singly dispersed and in loose cohesive clusters these cells are round to polygonal, with solitary ovoid nuclei, finely granular chromatin, inconspicuous nucleoli and occasional nuclear grooves. Figure 6B (Giemsa 100X): smears were hypercellular with sheets and individually scattered mononuclear chondroblastic cells, and diagnosis of chondroblastoma was made. The lesion was surgically excised. 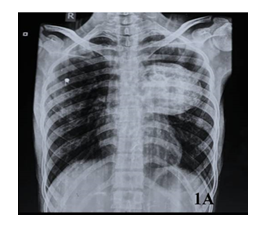 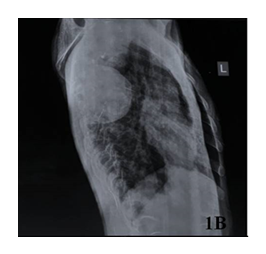 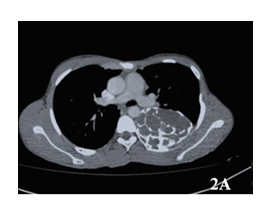 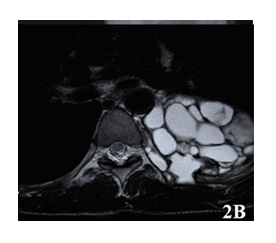 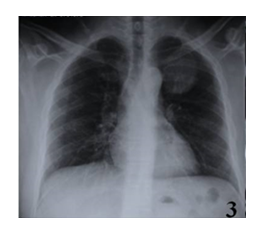 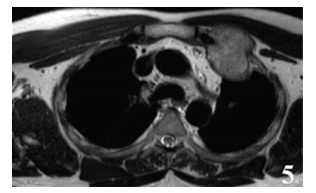 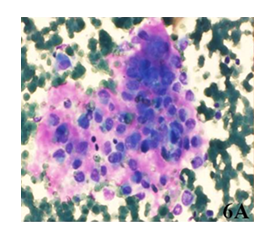 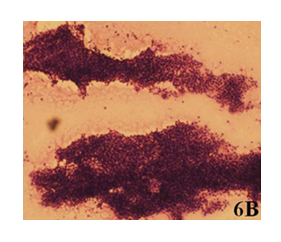 Rib lesions can be traumatic, metabolic, inflammatory, neoplastic or related to congenital disorders. Among neoplastic lesions, metastasis is the most common malignant rib lesion, mostly with primary from breast, prostate gland, lung, or kidney. Chondrosarcoma is the most common primary malignant rib lesion, usually occurring at or near the costochondral junction [12]. Most common differential for expansile lytic lesions of bone are –fibrous dysplasia, unicameral bone cyst, aneurysmal bone cyst, chondroblastoma, osteoblastoma, chondromyxoid fibroma and metastasis (renal, thyroid and breast), lymphoma(diffuse large B cell), leukaemia, langerhans cell histiocytosis [5]. Fibrous dysplasia is most common benign tumour of rib where as metastasis and myeloma are most common malignant tumours of rib. Plasmacytoma is another differential diagnosis of expansile lytic lesion of rib which occurs as a result of destruction of the cortex of bone with extension into surrounding soft tissue [6]. Although percutaneous biopsies of rib lesions under image guidance has high diagnostic yield ,lesions with no associated extra-osseous component have a lower biopsy success rate [13]. Unless proven otherwise, all rib lesions must be considered as potentially malignant.Prompt intervention is required .Wide resection with tumor-free margins provide the best chance for cure in both benign and malignant lesions [14].

Aneurysmal bone cyst can occur as primary as well as secondary tumors. Primary lesion occur commonly under 30 years of age. Clinically they present with mild pain, swelling and restricted movement [11]. On imaging appear as a well defined solitary expansile osteolytic bone lesion, filled with blood. It is because of its expansile nature that it had been named as aneurysmal bone cyst. Aneurysmal bone cyst is composed of numerous blood-filled arteriovenous communications [11]. Expansion of these cysts is due to increased venous pressure or secondary to trauma. It is a metaphyseal or diaphyseal tumor involving usually the long bones. ABC involving the ribs has rare occurance. On MR imaging, it shows multi-lobulated mass lesion with thin peripheral rim of low signal intensity [7]. Presence of fluid levels indicating hemorrhage, is not pathognomonic as it can occur in primary as well as secondary tumors [8].

Chondroblastoma classically involves the epiphyseal region of long bones and occurrence in chest wall is rare. It is located at an ossification site and is therefore usually found at the costo-chondral or costo-vertebral junction. The lesion may look aggressive on a CT. MRI shows considerable edema in the bone marrow and adjacent soft tissues. [9]. In chest wall it usually involves ribs and scapulae. If found in ribs, it is encountered at later age as compared to its usual occurrence in 2nd decade. As it arises from ossification centre costo-vertebral or costo-chondral junctions are typical site of occurance. These tumors can show aggressive nature and are difficult to differentiate from malignant tumors [10]. Aneurysmal bone cysts can occur secondarily in these tumors. Associated soft tissue and bone marrow edema can be seen.

Aneurysmal bone cysts (ABC) and Chondroblastoma have rare occurrence in chest wall. ABC can be primary or secondary with multiloculated appearance. Fluid levels are seen in both primary as well as secondary tumors. Chondroblastoma typically involves costo-vertebral or costo-chondral junctions with later age of occurrence as compared to classical tumors which occur in 2nd decade.