A 28-year-old primigravida with oligohydraminos and IUGR presented for her first prenatal visit at 35 weeks of gestation with complains of severe back pain, marked breast enlargement and tenderness. The patient reported that breast enlargement started at 5 months of gestation and was the first time she had experienced excessive breast enlargement. No significant past medical history was present. She reported that her breast size prior to pregnancy was around 32B and estimates her breasts are now 10 times bigger during this pregnancy. Physical exam revealed bilateral enlarged breasts with presence of an ulcer of 3-4 cm over right upper inner quadrant (Figure 1). Serum prolactin levels were normal. Other laboratory investigations were also unremarkable. Ultrasound of breast revealed skin thickening and dilated ducts and vascular structures. A biopsy was performed from the right breast which suggested atypical lobular hyperplasia. Patient refused for breast reduction surgery. Planned induction of labour was done at 37 weeks, however it was converted to caesarean section due to fetal distress. A live born boy with weight of 2.2 kg was delivered. No complications were seen. Patient was discharged and kept on follow up with reduction of up to sixty percent in size of breasts after 6 weeks post partum. 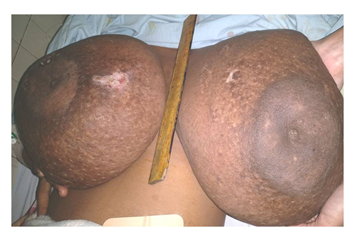 Gestational gigantomastia is a rare and debilitating condition which is characterized by massive enlargement of the breasts with associated tissue necrosis or haemorrhage and psychosocial implications [1, 2]. GG is an uncommon disease and the exact pathophysiology is not clear. The risk factors reported are Caucasian women, multiparity, occurrence in prior pregnancy and association with autoimmune diseases [2, 3]. The majority of cases are bilateral and seen in early pregnancy. The condition is benign and may mimic malignancy due to rapid enlargement and skin edema. Sometimes a biopsy should be done if high clinical suspicion of malignancy is seen [3].

Treatment is still controversial and modalities include medical management with bromocriptine and surgical breast reduction. In our case, the patient opted for watchful observation without treatment and was kept on follow up. There was significant reduction in breast size at a 6 month follow up.