Glandular odontogenic cysts is one of the infrequent neoplasms seen in the oral cavity. They are developmental in origin with unpredictable and aggressive behavior. They are most commonly found in the anterior region of mandible having a predilection for the middle age group. These cysts have striking histologic features even though they have certain overlapping characteristics with other neoplasms. It is very important for us to cognize these unique differentiating features for a conclusive diagnosis. This paper reviews a case of Glandular odontogenic cyst which presented in our department and also elucidates the clinical, radiographical and histological criteria needed to diagnose the same.

The cysts developing from the odontogenic epithelium are referred to as odontogenic cysts. It may be both developmental and inflammatory in origin. Glandular odontogenic cysts (GOC) are developmental in origin with aggressive nature. It is generally accepted to be odontogenic in nature, but it shows glandular and salivary features owing to its pluripotentiality [1]. GOC was first described as Sialo-odontogenic cyst by Padayachee and Van Wyk in 1987 [2]. It was further described as a distinct clinicopathological entity by Gardner et al in the year 1988 [3]. In the year 1992 GOC was put under the entity of a developmental odontogenic cyst by WHO. The term ‘polymorphous odontogenic cyst’ was given to GOC by High et al in 1996 owing to its aggressive behavior [4]. It appears as an asymptomatic swelling in the anterior mandibular region [1]. GOC can present as unilocular or multilocular well defined radiolucent lesions [5], also may sometimes have scalloped borders. GOC often gets misdiagnosed because of its overlapping features with other odontogenic cysts like lateral periodontal cyst (LPC) or botryoid cyst and central low-grade Mucoepidermoid carcinoma (CMEC) [6].

A 19-year-old male reported with a chief complaint of a swelling in the left side of neck for 9 months. The swelling was slowly growing which gradually increased to the present size. The patient had no significant family and medical history. There was extraoral swelling seen in the left neck in the submandibular region and the lymph nodes were non-palpable. On extraoral examination the unilateral swelling was approximately 5.0 x 4.0 x 4.0 cm in size, of the same color as that of the skin (Figure 1a). On palpation, the lesion was non-tender and firm in consistency with regular smooth borders and no discharge on compression. No significant intraoral abnormalities were present (Figure 1b). The lesion was surgically excised and sent for histopathological examination. A provisional diagnosis of Ranula was given. The radiographic examination revealed a unilocular radiolucency extending from first mandibular molar to the developing third molar (Figure 2).

On gross examination, one soft tissue specimens were received collectively measuring 5.5x 3.5x 3 cm in size, grayish brown in color, irregular shape in surface and firm in consistency. There was a bluish cystic sac attached to soft tissue mass seemed to be filled with some cystic fluid. The cystic sac appeared bluish in color. The soft tissue specimen was sectioned into two halves and both the bits were kept for routine processing (Figure 3a and 3b). The histopathological examination reveals cystic area lined by pseudostratified ciliated columnar epithelium of varying thickness. Few areas showed stratified squamous epithelial lining. The superficial epithelial cells lining the cystic cavity were cuboidal in shape resembling hobnail cells. Few clear cells were also noted in the epithelium. The epithelial connective tissue interface was flat. The underlying connective tissue stroma was fibrous with regularly arranged collagen fiber bundles. Few blood vessels and inflammatory cells chiefly composed of neutrophils were seen too (Figure 4a-c). 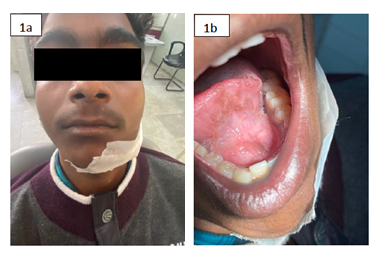 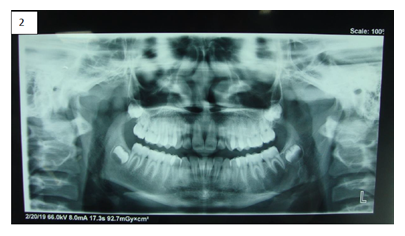 Figure 2: Orthopantogram showing a unilocular radiolucency in the left angle of mandible region. 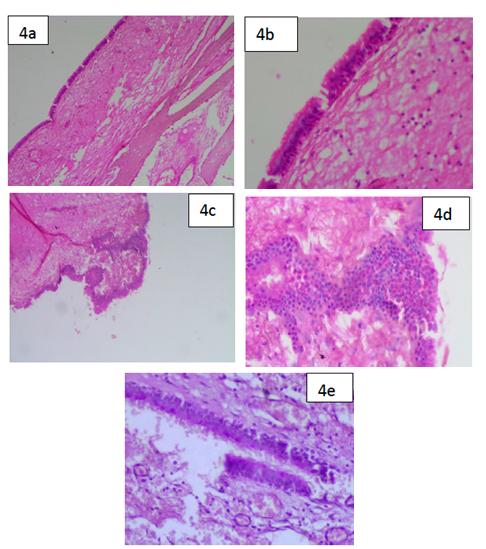 Glandular odontogenic cyst is an infrequent cyst of the jaw with less than 300 cases described till date. It has a slight male predilection, commonly seen in middle age group with an increased preponderance for the anterior lower jaw [7]. GOC is not a very common lesion with a recurrence rate of 21 % to 55%[8]. This high rate of recurrence can be attributed to the aggressive nature of the tumor [8]. Imaging analysis is helpful for the diagnosis of glandular odontogenic cyst, the locularity, radiodensity, and border characteristics of glandular odontogenic cyst are important in differentiating it with other odontogenic cysts [9]. Although, GOCs do not exhibit any striking clinical and radiographic features, their peculiar histopathologic features which should be analyzed in depth before diagnosing any such neoplasm [10]. Kaplan et al formulated a set of major and minor criterions for the diagnosis of GOC [11, 12]. They proposed that to conclude to a diagnosis all the major criteria should be fulfilled, and the minor ones may aid in the same.

Fowler et al did not think that all the major criteria needed to be met to conclude to a diagnosis. They set aside a set of 10 distinguishing features, out of which the presence of 7 features was said to conclude to a conclusive diagnosis [13]. They also proposed that the presence of five or less features could be mimicking GOC like cyst [13]. Due to overlapping clinical and histopathologic features, Glandular Odontogenic Cyst should be differentiated from Lateral Periodontal Cyst, Botryoid Odontogenic Cyst, low grade Central Mucoepidermoid Carcinoma and Dentigerous Cyst with mucous metaplasia to conclude to a definitive diagnosis [14].

The present case fulfills all the major criteria laid down by Kaplan et al and few of the minor criteria’s as well. It showed squamous epithelial lining of varied thickness with flat connective tissue interface, epithelial plaques, hobnail cells, goblet cells and intraepithelial microcystic spaces. It also exhibited areas of ciliated epithelium with vacuolated cells in the spinous layer. Due to similar features of GOC with the above-mentioned lesions, immunohistochemical evaluation might also aid in diagnosing this cyst. The epithelium of GOCs show strong positivity of cytokeratin 19 in the entire thickness of the epithelium confirming its odontogenic origin [15]. Ki 67 can aid in differentiating it from CMEC [12]. The immunohistochemical expression of Mammary Serine Protease Inhibitor (MASPIN) was seen significantly higher in CMEC than GOC [16]. Most cases of glandular odontogenic cyst have been treated by enucleation or curettage. However, this cyst shows a propensity for recurrence, which is observed in approximately 30% of all cases [1]. Treatment by enucleation or curettage might be the reason for high recurrence rate. The surgical treatment of large lesions should include enucleation with peripheral ostectomy for unilocular cases and marginal resection or partial jaw resection in multilocular cases [7, 17]. Follow-up should be continued for at least 3 years [6].

Dental surgeons could help better in diagnosing a lesion in the oral cavity with such diverse and overlapping features. Even though GOCs are rare with very low recurrence and good survival rate, these lesions also need timely and precise diagnosis. Understanding of the clinical presentation and specific diagnostic features will lead to early detection. This case report elucidates the importance of the histologic diagnosis of any neoplasm apart from their routine clinical and radiographic diagnosis. Also, how the differential diagnosis of a neoplasm plays a role in concluding to a diagnosis. Although GOC has low incidence and transform into malignancy rarely, owing to its aggressive behavior, a long-term follow up is advised.

The authors certify that they have obtained all appropriate patient consent forms. In the form the patient(s) has/have given his/her/ their consent for his/her/their images and other clinical information to be reported in the journal. The patients understand that their names and initials will not be published, and due efforts will be made to conceal their identity, but anonymity cannot be guaranteed.