Hepatic Inflammatory Pseudotumor: Know It to Recognize It

Inflammatory pseudotumor of the liver (IPTL) is a rare benign lesion that can mimic hepatic malignant neoplasms. A 79-year-old woman, in follow-up care for a left breast cancer, was referred to our Ultrasound Diagnostic Centre for a hepatic mass of unknown nature, displayed on PET-CT, CT and Abdominal Ultrasonography (US). The patient presented with abdominal pain and low-grade fever, increased values of C-Reactive Protein (CRP) and gamma-glutamyl transpeptidase (γGT). Abdominal US confirmed the presence of a heterogeneous polycyclic mass 4.0 × 3.7 cm in size, sub-capsular, localized in the segment VI, isoechoic in arterial phase and hypoechoic in portal and late phase on contrast-enhanced ultrasound (CEUS). A liver biopsy revealed the presence of chronic inflammatory cells without evidence of malignancy. As the patient did not respond to medical therapy, she underwent hepatic segmentectomy and cholecystectomy. At histology, the specimen showed acute and chronic inflammation with xanthogranulomatous features.

Inflammatory pseudotumor (IPT) is a rare benign condition which can mimic malignant tumors and is composed predominantly of inflammatory cells with variable amounts of fibrosis [1]. The most frequent site of involvement is the lung, but it can also occur in the liver and other organs [2]. IPTL has no specific clinical, radiologic, laboratory and histopathological findings, therefore an accurate differential diagnosis is essential to rule out other entities, such as inflammatory myofibroblastic tumor or sclerosing IgG4-related disease, and to plan treatment and to establish prognosis. Infectious and inflammatory causes, resulting for instance from rupture of the bile duct and extravasation of bile into the tissue, have been proposed, but in most of the cases etiology remains unknown3.

A 79-year-old woman presented to our Ultrasound Diagnostic Centre for an hepatic mass found on PET-CT, CT and Ultrasound Study (US), performed for recent onset of anorexia, low-grade fever and pain in the right hypochondrium. The patient was in follow-up care for a left breast cancer, treated at first with superior external quadrantectomy, and then with radical mastectomy and hormone therapy. Ten years later, a lymph node recurrence occurred and was treated with axillary node dissection. Before coming to our Centre, the patient performed PET-CT, US and CT that revealed the presence of a sub-capsular hepatic lesion in the segment VI and laboratory tests that revealed a γGT level fivefold greater than the upper cut-off, increased CRP (15 mg/dl) and negativity of tumor markers, hepatotropic viruses and autoimmunity markers. A first ultrasound-guided percutaneous liver biopsy was performed which histologically consisted of hepatic parenchyma with chronic inflammatory infiltrate, without evidence of malignancy. For the persistence of abdominal pain and worsening blood tests, the patient was referred to our Ultrasound Diagnostic Centre. The abdominal US confirmed the presence of a well-defined heterogeneous polycyclic mass, measuring 4.0 x 3.7 cm in size, sub-capsular, localized in the segment VI. CEUS was performed: the lesion appeared isoechoic in arterial phase, with wash-out in portal and late phase, suggestive also for secondary hepatic nodules (Figure 1). 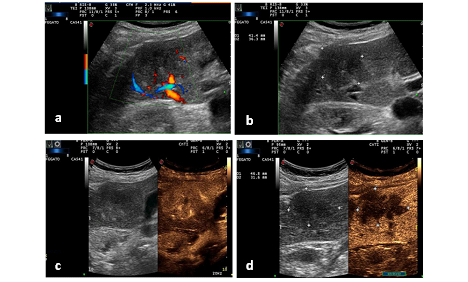 We performed a second ultrasound-guided percutaneous liver biopsy that revealed hepatic parenchyma with fibrosis and chronic inflammation. Therefore, a medical therapy with antibiotic, steroid and nonsteroidal anti-inflammatory drugs (NSAIDs) was administered, with temporary clinical and laboratory success. For the re-occurrence of symptoms and for the inhaltered size and CEUS pattern of the lesion, the patient underwent surgical resection of the hepatic lesion (Figure 2) and cholecystectomy. 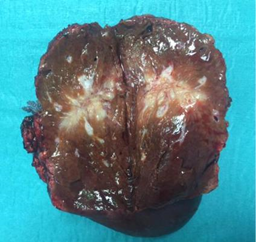 Figure 3: Histology of the surgical specimen. 3a The lesion is composed of multiple confluent granulomas with central suppurative necrosis (H&E, 20x). 3b At high power, the viable tissue is composed of lymphocytes, plasmacells and histiocytes, some of which are multinucleated (H&E, 200X).

IPT is a rare benign condition which was first described in the lung in 1939 [4]. It is a mass-forming lesion of unknown etiology which is composed of acute and chronic inflammatory cells with various degree of fibrosis [5]. It can also occur in extra-pulmonary sites, including orbit, spleen, intestines, pancreas, liver, kidneys, urinary bladder, omentum, central nervous system, major salivary glands, larynx, ovaries, breasts, lymph nodes, skin and soft tissues [3, 6, 7]. Given the lack of uniform diagnostic criteria, the exact incidence of IPTL is unknown. Since its first description in 1953 by Pack and Backer [1], many other cases have been reported [7] some of them encompassing inflammatory myofibroblastic tumors which are true neoplastic lesions associated with anaplastic lymphoma kinase traslocation (ALK-1), that can recur and rarely metastasize [8].

According to Agaimy et al, IPTL mainly occurs in childhood and early adulthood, with a male-to-female ratio ranging from 1:1 to 3,5:1 [9] and it is more common in non-European populations [10]. Etiology is unknown, but a role is probably played by biliary obstruction, chronic cholangitis and primary sclerosing cholangitis [7, 11], gut infectious bacteria, such as actinomyces, bacteroides, Escherichia coli, Klebsiella, enterococcus, gram-positive cocci and beta-hemolytic streptococci, that provoke an inflammatory response, which sometimes decreases or completely resolves upon administration of antibiotics or NSADs [12, 13]. Other causes of IPTL could be vascular diseases, trauma and surgical-related infections and EBV-positive infection [1-14].

Recognition of IPTL is important because it can mimic hepatic malignancies, either primary (hepatocellular carcinoma and cholangiocarcinoma) or metastatic, and specific granulomatous lesions, such as sarcoidosis and tuberculosis. Correct diagnosis is difficult for the lack of a specific clinical presentation and laboratory or radiologic findings, leading differential diagnosis with other focal hepatic lesions the major problem [18]. The most frequent symptoms are abdominal pain and constitutional symptoms such as fever, malaise, fatigue and weight loss. Rarely patients present myalgia, jaundice and gastrointestinal upset [7, 12]. Only 9% of patients are asymptomatic. Laboratory tests can display an elevation of white blood cell counts (WCCs) and of acute-phase reactant inflammatory markers such as erythrocyte sedimentation rate (ESR) and CRP in 37% of patients, altered liver function tests in approximately 15% of patients [19]. US and CT scans are not specific, for the variable patterns of echogenicity or contrast enhancement and for the evidence of liver mass mimicking malignant lesion [18].

There are no typical histological features of IPTLs, but in a recent study Makhlouf et al described 145 cases of IPTL and identified five main histological subgroups: plasma cell-rich, mixed inflammatory cell, granulomatous with or without eosinophils and predominantly purulent. None of their cases stained positively for infectious agents and immunostaining found no evidence of lymphomas, IgG4-related disease or ALK-1 positive myofibroblastic tumors. Follow up data revealed no patients with subsequent evidence of neoplasms, recurrences or metastases [17]. Therefore it appears that IPTL is mainly a diagnosis of exclusion, both clinically and histologically. In our case, tumoral, infectious and granulomatous causes and IgG 4-related disease were ruled out and IPTL was associated with chronic lithiasic cholecystitis.

The natural clinical course of IPTL is spontaneous regression without intervention [12, 20], but treatment is often necessary. Although management options include conservative (antibiotics, NSADs and steroids) or surgical approaches, the treatment of choice is still surgical resection, especially for patients with severe symptoms or an indeterminate diagnosis [21, 22]. In addition, surgical resection avoids recurrence of lesion [3] and permits histological study of surgical specimen, determining a final diagnosis. In example, medical therapy with antibiotics, NSADs and steroids was administered to our patient, without clinical and radiological benefit. Therefore, patient underwent surgical resection, with resolution of clinical signs and symptoms.

Our case report of IPTL was associated with chronic lithiasic cholecystitis, in a patient where medical history, non-specific symptoms and imaging pointed towards an hepatic malignancy. Clinicians have to think about IPTL when hepatic mass is detected on radiological studies, but there are clinical signs, symptoms and laboratory tests suggesting inflammation. In addition, in this context diagnosis of IPTL was supported by negativity of tumor and autoimmunity markers, of hepatotropic viruses and by histopathological presence of inflammation cells, in absence of tumor cells.

The authors state that they have no Conflict of Interest (COI).