Heart failure with preserved ejection fraction (HFpEF) accounts for almost half of all heart failure cases and its clinical outcomes remain poor due to its heterogeneity. Atrial fibrillation (AF) plays a role in the pathophysiology of HFpEF and rhythm control in AF can improve left ventricular diastolic function; however, the relationship between AF and right ventricular diastolic function has not been fully examined in HFpEF. In this case report, we present a 72-year-old woman who developed HFpEF complicated by AF and less-distensible right ventricle. AF was associated with reversible impairment of RV diastolic function in this case.

Heart failure with preserved ejection fraction (HFpEF) accounts for almost half of all heart failure cases and its clinical outcomes remain poor due to its heterogeneity [1, 2]. Recently, attention has been paid to right ventricular (RV) dysfunction, which is associated with the severity of HFpEF [3, 4]. Atrial fibrillation (AF) also plays a role in the pathophysiology of HFpEF and rhythm control in AF can improve left ventricular (LV) diastolic function [5]; however, the relationship between AF and RV diastolic function, especially RV distensibility, has not been fully examined in HFpEF. Recently, we reported that the prevalence of less-distensible right ventricle increases with age, and that RV dysfunction is associated with the clinical outcomes of HFpEF [4, 6].

In this case report, we present a 72-year-old woman who developed HFpEF complicated by AF and less-distensible right ventricle. AF was associated with reversible impairment of RV diastolic function based on the jugular venous pulse.

A 72-year-old female presented with dyspnea during exercise and at rest, marked leg edema, weight gain of approximately 5 kg, and tachycardia associated with pleural effusion and lung congestion (Figure 1A). AF tachycardia was observed on her electrocardiogram (Figure 1B) and initial echocardiography assessment at emergency department demonstrated preserved left ventricular ejection fraction (LV ejection fraction 56%) (Figure 1C). She was diagnosed with acute decompensated heart failure due to heart failure with preserved ejection fraction (HFpEF) and atrial fibrillation (AF), and admitted to the high care unit (HCU). She was managed in the HCU with furosemide and nitroglycerin infusion, and non-invasive positive pressure ventilation. Two days after admission, bisoprolol (1.25 mg/day) was started to control the heart rate. She gradually recovered and no longer required medication or respiratory support. On day 4 of admission, detailed echocardiography was performed. The LV septal e’ (Figure 1D) and elevated mitral E/e’ ratio were 6.9 cm/s and 13, respectively. Moderate and severe valvular stenosis and regurgitation were not observed on echocardiography. Her RV systolic pressure was 35 mmHg; however, other RV function was unable to be assessed by echocardiography due to complex RV anatomy and jugular venous pulse was instead examined. Her jugular venous pulse waveform was indicative of dominant ‘Y’ descent deeper than the ‘X’ descent, a sign of less-distensible right ventricle (Figure 1E); however, signs of constrictive pericarditis, such as septal bounce and mitral inflow variation with respiration and cardiac amyloidosis, such as granular sparkling echoes, were not observed on echocardiography. The brain natriuretic peptide (BNP) was 462 pg/ml. On day 5 of admission, she underwent coronary CT angiography, but neither significant coronary artery stenosis nor pericardial calcification was observed, and there was no thickness on CT (Figure 1F).

Time-dependent changes in chest X-ray, mitral inflow of echocardiography, and jugular venous pulse are shown in Figure 2. At the time of hospital discharge, lung congestion and pleural effusion disappeared from chest X-ray (Figure 2A, upper), which led to the improved NYHA classification from IV to II and BNP (199 pg/ml); however, AF persisted. Only the E wave was observed and the deceleration time (DT) was 147 ms in mitral inflow (Figure 2A, middle). The pattern of less-distensible right ventricle was also observed (Figure 2A, lower). Bisoprolol (7.5 mg/day) was administered in order to control the heart rate at the time of hospital discharge. The follow-up electrocardiogram after 3 months exhibited sinus rhythm and improved BNP level (88 pg/ml). A slower DT of mitral inflow (232 ms), A wave, and RV relaxation abnormality pattern suggested by high A wave in jugular venous pulse were observed with no change in other LV indices (Figure 2B, middle and lower). Moreover, her NYHA class improved from II to I. Eighteen months after discharge, she had palpitations 3 days before medical examination. On the day of medical examination, she presented with leg edema and dyspnea on exertion. Cardiomegaly and pleural effusion were noted on chest X-ray (Figure 2C, upper). AF had recurred, the DT of mitral inflow was shorter (138 ms), and her jugular venous waveform presented the less-distensible right ventricle pattern i.e., dominant ‘Y’ descent deeper than the ‘X’ descent (Figure 2C, meddle and lower). 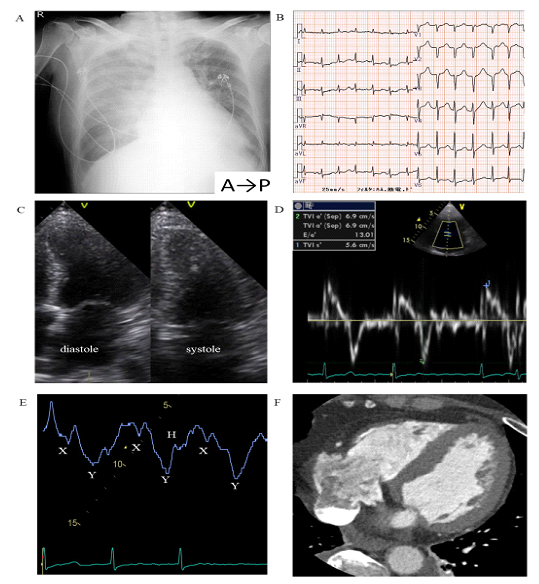 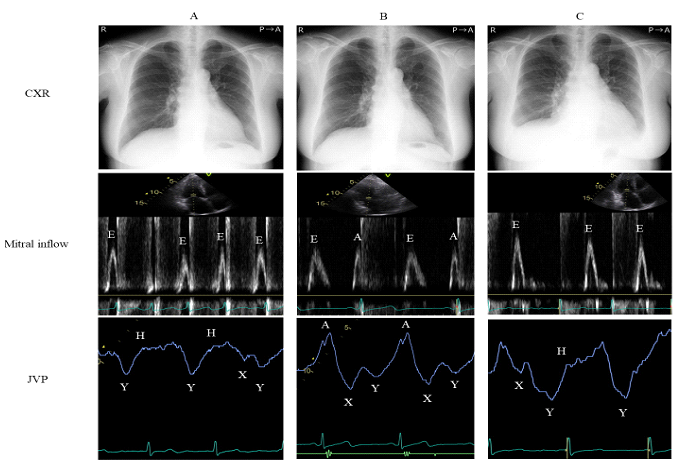 In general, pattern of less-distensible right ventricle, dominant ‘Y’ descent deeper than the ‘X’ descent, can be seen in constrictive pericarditis and/or amyloidosis, which limits the preload reserve for the right ventricle, and this sign remains unchanged unless specific therapy for these diseases is performed. Why was RV distensiblity impaired in this case? Although subclinical amyloidosis, such as wild-type transthyretin amyloidosis, may be underdiagnosed [12], constrictive pericarditis and overt amyloidosis were not suggested by echocardiographic examination or CT scan. RV diastolic function is usually influenced by age-related change of the myocardium, increased RV afterload, and/or diastolic ventricular interaction [6, 13, 14]. The patient was 72-years-old, had increase in RV systolic pressure, and high LV filling pressure suggested by increase in mitral E/e’ ratio. These features may have led to the RV diastolic dysfunction. AF may also have led to RV diastolic dysfunction. Jugular venous pulse waveform under the condition of sinus rhythm exhibited high A wave, RV relaxation abnormality pattern. AF tachycardia influenced the RV diastolic function and increased in RV filling pressure through incomplete RV relaxation in this case. In addition, atrial kick in the late diastolic phase disappeared due to AF and the ventricular preload depended more on inflow in the early diastolic phase, which may be represented by the shorter DT in the mitral inflow and deeper ‘Y’ in the jugular venous waveform. Thus, less-distensible right ventricle in this case may have been caused by the pathophysiological mechanisms described above. Moreover, RV diastolic function might be affected mainly by AF in this case, because the pattern of the jugular venous pulse waveform changed from less-distensible right ventricle to RV relaxation abnormality under the condition of sinus rhythm even if the RV diastolic function had been influenced by another factor, e.g. age-related change of the myocardium. To our knowledge, this is the first report of AF being associated with RV diastolic function based on the jugular venous pulse in a patient with HFpEF. High ventricular diastolic pressure increases atrial pressure, which may contribute to development of AF. Although the causality between AF and less-distensible right ventricle could not be discussed, vicious cycle might be formed between AF and less-distensible RV in this case.

The role of late diastolic ventricular filling in the stroke volume depends on the severity of ventricular distensibility. Non-distensible ventricle, such as constrictive pericarditis, has no filling fraction after the rapid filling period and atrial kick becomes meaningless [15]. On the other hand, less-distensible ventricle, such as restrictive cardiomyopathy, has a modest filling fraction, but definite slow filling and atrial contraction periods [10]. Indeed, the A wave in the jugular venous pulse and mitral inflow were observed and the BNP level improved under sinus rhythm in this case. Thus, atrial contraction plays an important role in maintaining the stroke volume and AF is a therapeutic target for this patient with HFpEF.

AF was associated with reversible impairment of RV diastolic function in this case. Rhythm control in AF may play an important role in preventing deterioration in some HFpEF patients.